America has initiated its economic reopening, yet businesses and citizens alike lack clear and consistent guidance on how to take action and resume regular activity safely and responsibly. The U.S. Federal Reserve identified September 2020 as the point when data and results would provide more clarity on the future of the American economy. Meanwhile, business owners will grapple with the immediate public health and economic ramifications of reopening throughout busy summer months.

This eBriefing, the second in our “Guiding the Reopening of American Business” series, features experts sharing their hands-on experience in reopening and real-world lessons learned to date. Moderated by Stefanie Ilgenfritz, Coverage Chief for Health & Science and Editorial Director of The Future of Everything at The Wall Street Journal, the panel of public health and business leaders discussed working on the front lines helping communities, businesses, and workers develop and implement robust and effective plans and procedures for reopening.

In This eBriefing, You’ll Learn: 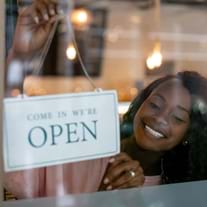 Guiding the Reopening of American Business

He attended Johns Hopkins University School of Medicine in Baltimore, taking a one-year leave of absence from medical school for a postdoctoral fellowship in pharmacology from 1983 to 1984. In 1987, he obtained his M.D. from Johns Hopkins and joined the Hopkins faculty as assistant professor. In 2002, Dr. Hildreth became the first African American in the 125-year history of Johns Hopkins School of Medicine to earn full professorship with tenure in the basic sciences.

In October 2008, he was honored for his contributions to medical science by election to the Institute of Medicine, part of the National Academy of Sciences, the most prestigious biomedical and health policy advisory group in the U.S. In August of 2011, Dr. Hildreth became dean of the College of Biological Sciences at University of California, Davis. He was the first African-American dean in the university, which was founded in 1905. He was also appointed as a tenured professor in the Department of Cellular and Molecular Biology as well as professor in the Department of Internal Medicine in the UC Davis School of Medicine.

Before joining Union Pacific, Fritz worked for Fiskars Inc., Cooper Industries and General Electric. He is a graduate of Bucknell University and earned a master’s degree in management from the Kellogg School of Management at Northwestern University.

Fritz is a member of the board of directors for the Association of American Railroads. He is chair of the Business Roundtable trade and international committee and serves on the U.S. Chamber of Commerce board and executive committee, the STRATCOM consultation committee and the Georgia Institute of Technology president’s advisory board. Fritz is deeply involved with organizations in his local community. He is the immediate past chairman of the Greater Omaha Chamber of Commerce board of directors. He is also a member of the board of directors for Nebraska Medicine and Omaha’s Henry Doorly Zoo & Aquarium.

Paul Medeiros directs NSF International’s Consulting and Technical Services team, providing unparalleled service to North American clients. He is responsible for all the strategic and operational aspects of the business.

Paul has more than 25 years of experience including several years of senior management experience in consulting, technical and retail audit services and he has a wealth of knowledge and expertise in risk management and quality management. Paul is a Certified Manager of Quality and Organizational Excellence with ASQ and a Certified Public Health Inspector (CPHI(C)). Paul has a B.Sc. in Environmental Health from Ryerson University and a M.Sc. in Food Safety and Quality Assurance from the University of Guelph.

Under Ms. Pinkham’s leadership, ten Salesforce Towers have been unveiled at the company’s headquarters across the globe in San Francisco, Indianapolis, Atlanta, Chicago, New York, Dublin, London, Tokyo, and Sydney. Bringing her brand influence to the workplace experience, she introduced the Ohana Floor, an open flexible hospitality space located at the top of the company’s towers. Typically a space for executive offices, Pinkham took a unique approach to designing these floors by opening them up to the community. During the day, the space is available for employees and their guests and on weeknights and weekends, the Ohana Floor is open to non-profits and education groups to host events at no cost.

A Salesforce veteran of over 19 years, Pinkham was previously responsible for global strategic events. She oversaw a wide range of brand and event experiences, including management of the company’s annual Dreamforce event in San Francisco since its first program in 2003 to Dreamforce 2016, which drew 171,000 registered attendees and 16 million plus online viewers.

Before joining Salesforce, Elizabeth held marketing positions at Oracle and Sybase. Ms. Pinkham holds a B.A. from the University of California, Berkeley.

Meharry Medical College President on COVID-19: “Don’t Be a Vector”

Work.com: Your Guide to Reopening the Workplace