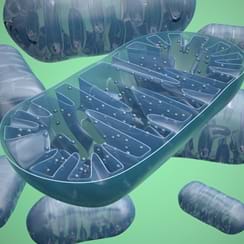 The canonical role of mitochondria is to function as the key regulator of cellular energy metabolism. However, mitochondria also play wider roles in cellular signaling, differentiation, cell death, regulation of the cell cycle and cell growth, in reactive oxygen species generation, and regulation of the epigenome. Dysregulation of these processes contribute to the aging process and play key roles in pathologies such as cancer, neurodegeneration, inflammatory and auto-immune diseases, and cardiovascular disease. While there have been advances in our understanding of basic mitochondrial biology and how the organelle regulates diverse cellular processes in recent years, the full implications of mitochondrial damage and dysfunction on human health and longevity are unknown.

The New York Academy of Sciences’ conference Mitochondria in Complex Diseases, held virtually on April 21, 2020, shed light on the impact of these cellular powerhouses in physiology and medicine. Speakers explored new advances in the basic biology of mitochondria, as well as the role of mitochondrial damage and dysfunction in cardiovascular disease, immunology, regenerative medicine, neurodegenerative disease, and aging.

“This meeting could not be timelier, as the globe deals with effects of the global COVID-19 pandemic," said scientific organizing committee member Douglas C. Wallace, PhD. "While it has been known for some time that viruses interact with certain aspects of mitochondrial function, SARS-CoV and SARS-CoV2 have brought the importance of the mitochondria in viral pathogenesis into sharp focus," he continued. "Analysis of the recent characterization of interactions of SARS-CoV2 proteins with cellular proteins has revealed the striking extent to which the viral non-structural protein and open reading frame polypeptides directly interact with our mitochondria and the systems that communicate the mitochondrial bioenergetic status to the rest of the cell.”

In this eBriefing you will learn:

Children’s Hospital of Philadelphia and Perelman School of Medicine, University of Pennsylvania 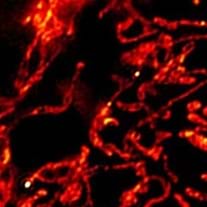 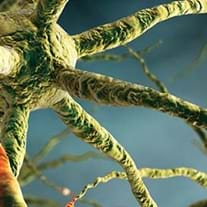 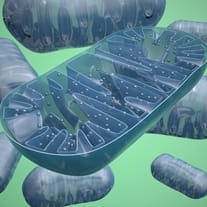 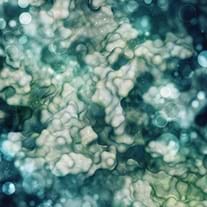 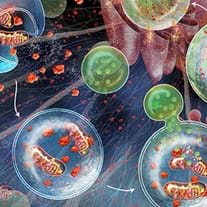 Dale Abel, MD, PhD is the Chair and Department Executive Officer of the Department of Internal Medicine and Director of the Fraternal Order of Eagles Diabetes Research Center (FOEDRC) at the University of Iowa. He is a Professor of Medicine, of Biochemistry, and of Biomedical Engineering, and holds the John B. Stokes III Chair in Diabetes Research and the François M. Abboud Chair in Internal Medicine.

Dr. Abel has had a distinguished career in endocrine and metabolism research. His pioneering work on glucose transport and mitochondrial metabolism in the heart guides his current research interests: molecular mechanisms responsible for cardiovascular complications of diabetes. His laboratory has provided important insights into the contribution of mitochondrial dysfunction and aberrant insulin signaling, to heart failure risk in diabetes. Recent work has focused on mitochondrial mechanisms that mediate inter-organ crosstalk that may influence the pathophysiology of insulin resistance and mitochondrial pathways linking metabolism with increased risk for atherothrombosis.

Dr. Phillip West, Assistant Professor at Texas A&M University Health Science Center, received dual B.S. degrees in Biology and Science Education from North Carolina State University. He earned his Ph.D. in Immunobiology from Yale School of Medicine under the mentorship of Sankar Ghosh. He then completed an American Cancer Society postdoctoral fellowship with Gerald Shadel in the Department of Pathology at Yale, and moved to Texas A&M in 2016. Dr. West’s research is focused on uncovering how mitochondria regulate innate immunity and inflammatory responses during infection, metabolic diseases, and cancer.

Mitochondrial Dynamics in the Regulation of Neurogenesis

Dr. Ruth Slack is Professor of Cellular and Molecular Medicine and Vice-Dean at the University of Ottawa. Her research group’s long-term goals are to promote the regeneration of the damaged brain after stroke or in neurodegenerative diseases. She and her team have shown that proteins that regulate cell replication can also play important roles in the regulation of neural stem cell self-renewal and long term maintenance in the embryonic and adult brain. Dr. Slack’s group has also shown that mitochondrial dynamics and function have a major impact on adult stem cells and their differentiation, thus changes in metabolism or defects in mitochondrial function in the context of neurodegenerative diseases may have a major impact on neurogenesis, regeneration and neurological function. By exploiting new knowledge of these key regulatory pathways, they plan to activate the neuronal precursor and stem cell pools in order to facilitate regeneration of the damaged brain.

Mitochondrial Dynamics in the Regulation of Neurogenesis

Mitochondrial dynamics in the regulation of neurogenesis: From development to the adult brain

Leanne Jones is a Professor in the Department of Molecular, Cell, and Developmental Biology and the Eli and Edythe Broad Center of Regenerative Medicine and Stem Cell Research at the University of California- Los Angeles. In addition, she is an active member of the Jonsson Comprehensive Cancer Center. Dr. Jones received her Ph.D. degree in Microbiology and Molecular Genetics from Harvard University, followed by postdoctoral fellowships in the laboratories of Philip Ingham (University of Sheffield) and Margaret Fuller (Stanford University School of Medicine). Her lab is interested in uncovering fundamental mechanisms by which stem cell behavior is regulated, using Drosophila melanogaster and human intestinal organoids as model systems. Recent work has focused on how stem cell behavior is modulated in response to aging and metabolic switches, which can result in loss of tissue homeostasis.

Dr. Bohr received his M.D. in 1978, Ph.D. in 1987, and D.Sc. in 1987 from the University of Copenhagen, Denmark. After training in neurology and infectious diseases at the University Hospital in Copenhagen, Dr. Bohr did a postdoctoral fellowship with Dr. Hans Klenow at the University of Copenhagen, Denmark. He then worked with Dr. Philip Hanawalt at Stanford University as a research scholar from 1982-1986. In 1986 he was appointed to the National Cancer Institute (NCI) as an investigator, becoming a tenured Senior Investigator in 1988. Dr. Bohr developed a research section in DNA repair at the NCI. In 1992 he moved to the NIA to become Chief of the Laboratory of Molecular Genetics. His main contributions have been in the area of DNA repair. He has worked on many aspects of DNA damage and its processing in mamm https://www.ncbi.nlm.nih.gov/pmc/articles/PMC6693625/alian cells. He developed a widely used method for the analysis of DNA repair in individual genes and found that active genes are preferentially repaired. This observation was a major advance in the clarification of the tight interaction between DNA repair and transcription, a process termed transcription-coupled repair. In recent years numerous papers from his laboratory have focused on mechanisms of DNA damage processing, particularly on nucleotide excision repair and transcription coupling.

Estela Area-Gomez, PhD, is Assistant Professor in the Department of Neurology at Columbia University Medical Center in New York. Dr. Area-Gomez obtained her doctorate in the Autonoma University in Madrid, on the study of the 3D structure of ribonucleoproteins of Influenza Virus. She entered the world of cell pathology as a post-doctoral research scientist at the Merritt Center in the Department of Neurology at Columbia University, under the supervision of Drs. Schon, DiMauro and Hirano, pioneers of research into mitochondrial pathogenesis. Her postdoctoral training allowed her to become proficient in mitochondrial research, and to transition into the field of human disease.

Based on previous publications, Dr. Area-Gomez decided to focus on how mutations in presenilin-1 and -2 (PS's); two ER proteins implicated in familial AD, were able to profoundly affect mitochondrial function. She found that PS's, and -secretase activity itself, are indeed ER proteins, but are enriched in a subcompartment of the ER that interacts with mitochondria, called mitochondria-associated ER membranes (MAM), which is the locus of many cellular functions. Since then Dr. Area-Gomez has spent the last 15 years investigating the role of MAM in the regulation of the physical and functional interactions between mitochondria and ER, which have revealed a novel mechanism underlying neuronal injury in AD.

In 2013, Dr. Area-Gomez started her own laboratory in the Department of Neurology at Columbia University Medical Center, where she continues to work on the mechanism of MAM alteration in neurodegeneration; novel mechanisms underlying the connections between lipid metabolism and neuronal regulation, and the role of lipid dysregulation as seminal effector in this pathogeneses. In addition, since 2018, Dr. Area-Gomez has been the director of the Neurolipidomics Unit within the Motor Neuron Center, collaborating with multiple scientists at Columbia University and other institutions.

Mitochondria, OxPhos, and neurodegeneration: cells are not just running out of gas

Jerry Edward Chipuk, PhD, is Associate Professor of Oncological Sciences and Dermatology, and Associate Director of The Tisch Cancer Institute (TCI) at the Icahn School of Medicine at Mount Sinai (ISMMS). He joined the ISMMS in 2010, following graduate studies at Case Western Reserve University; and post-doctoral fellowships with Douglas R. Green Ph.D. at the La Jolla Institute for Allergy and Immunology in San Diego, California and St. Jude Children’s Research Hospital in Memphis, Tennessee. More recently, Dr. Chipuk was appointed to the Diabetes, Obesity, and Metabolism Institute, Director for Cell Biology in the Graduate School of Biomedical Sciences, and the TCI Diversity and Inclusion Committee at the ISMMS. Dr. Chipuk studies fundamental mitochondrial biology within the perspectives of human disease etiology and treatment. His laboratory develops novel model systems, experimental tools, and extensive collaborations to investigate the mechanistic intersections between mitochondria, cell biology, and disease. Dr. Chipuk is on the editorial boards for numerous journals focused on cellular biology and cancer; serves on the Board of Directors of the International Cell Death Society; serves the global cancer community by participation on numerous scientific review panels, and is a Senior Affiliate with the CSHL bioR𝛘iv.