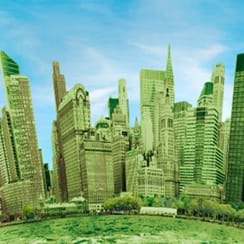 On July 17, 2008, former U.S. Vice President and Nobel Prize winner Al Gore challenged Americans to produce all their electricity from carbon-free sources within 10 years. On October 9, 2008, the Academy hosted a panel to explore what it would take for New York City to achieve this goal.

Sanjoy Banerjee, director of CUNY's Energy Institute, examined how all of the city's energy needs might be met with clean energy and what advances in battery technology are needed to capitalize on it. Charles Komanoff, co-director of the Carbon Tax Center, reviewed policy tools and market-correcting mechanisms for reducing carbon emissions, with a focus on a carbon tax. Klaus Lackner, director of Columbia University's Lenfest Center, took big-picture approach, explaining why he believes that the only technologies that can be scaled up adequately are solar, carbon capture and storage, and nuclear, and he presented a searching and sobering appraisal of nuclear's prospects.

New York is one of the U.S. Department of Energy's 25 Solar America Cities, a program aimed at removing market barriers to adoption of solar energy technologies.

European Renewable Energy Council
With Greenpeace, EREC issued a 2008 study that details how—at a cost of trillions of dollars—the world could free itself of fossil fuels by 2090.

We Can Solve It
Launched by Al Gore's Alliance for Climate Protection, this project promotes 100% carbon-free electricity for the United States within 10 years. The site offers video and full transcript of Gore's speech announcing this energy challenge.

For more on Gore, see The (Annotated) Gore Energy Speech in Andrew Revkin's blog in The New York Times. See Gore's Call to Action by Paul Vitello in The Times' politics blog, reporting on Gore's news-making statement, "[I]t is time for civil disobedience to prevent the construction of new coal plants that do not have carbon capture and sequestration." And see Gore's major op-ed piece on November 5, 2008: "The Climate for Change."

Dorn JG. 2008. Solar thermal power coming to a boil. Earth Policy Institute (July 22). Gotham Gazette. This NYC publication's sustainability beat is a valuable source. See this article on bureaucratic hurdles encountered by a homeowner aiming to install solar panels on his roof, and this piece on smart meters.

Romm J. 2008. Why we never need to build another polluting power plant. Salon.com (July 28). A blog post at The New Republic comments on Romm's piece.

Sanjoy Banerjee is Distinguished Professor of Chemical Engineering and director of CUNY's new Energy Institute, headquartered at City College. From 1980 to March 2008, he held joint appointments in the Mechanical Engineering Department and Bren School of Environmental Science at the University of California, Santa Barbara.

Banerjee's main area of research has been the behavior of systems far from equilibrium, including rapid phase transitions, turbulence, and, most recently, nonlinear phenomena such as dendrite formation in electrochemical energy storage systems.

Charles Komanoff is a widely published energy policy analyst and environmental activist based in New York City. He directs the consulting firm Komanoff Energy Associates and is a founding trustee of the Tri-State Transportation Campaign, director of the Bridge Tolls Advocacy Project, and coordinator of the pedestrian-rights organization Right Of Way. He "re-founded" the bike-advocacy group Transportation Alternatives and wrote or edited reports titled Subsidies for Traffic, The Bicycle Blueprint, and Killed By Automobile. His article Whither Wind: A Journey through the Heated Debate Over Wind Power appeared in the September/October 2006 issue of Orion.

Author of the 1981 book Power Plant Cost Escalation, which analyzed the economics of nuclear power, Komanoff served as an expert witness on the subject for states and municipalities across the United States. In 2007, he cofounded the Carbon Tax Center. His current work focuses on the economic and environmental benefits of carbon taxing and road pricing. He graduated with honors from Harvard, where he studied applied math and economics.

His research centers on capturing carbon dioxide in power plants and directly from the atmosphere, and includes mineral sequestration, zero emission coal plants, carbon electrochemistry, and the study of large-scale energy infrastructures. He helped form the Zero Emission Coal Alliance, an industry-led group that defined the zero emission concept. He is affiliated with GRT, a company in Tucson, Arizona, that aims to develop a commercially viable technology for capturing CO2 from the atmosphere.

Lackner received his PhD in theoretical physics from the University of Heidelberg. He held postdoctoral positions at Caltech and the Stanford Linear Accelerator Center before joining Los Alamos National Laboratory in 1983, where he investigated hydrodynamic problems. He has published on the behavior of high explosives, novel approaches to inertial confinement fusion, and numerical algorithms. In 1995 his work on self-replicating machine systems was recognized by Discover magazine as one of seven ideas that could change the world.

George R. Hendrey is Distinguished Professor of Earth and Environmental Science at Queens College. With academic training in both engineering and ecology, he has worked to apply concepts from engineering to research on issues related to ecological change. After serving in the Peace Corps and working at Boeing as an engineer–chemist, Hendrey completed his PhD at the University of Washington. He then worked for the Norwegian Institute for Water Research in Oslo before moving to Brookhaven National Laboratory where he was a senior ecologist.

While at Brookhaven, Hendrey developed the free-air CO2 enrichment technology that has resulted in hundreds of publications by scientists on the effects of increased atmospheric CO2 on plants and ecosystems. His current research interests are in responses of photosynthesis to non-steady state environmental conditions, potential benefits and applications of green roofs, and methods for studying atmosphere–forest carbon exchange.