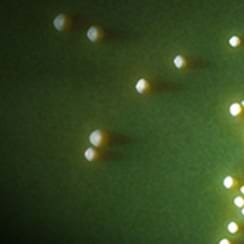 A History of Resistance: Bacterial Adaptation and Pathogenesis

On December 10, 2008, researchers gathered at the Academy to honor microbiologist Issar Smith for his more than 40 years of work at the Public Health Research Institute. Focusing on B. subtilis and M. tuberculosis, the organisms that were the focus of Smith's career, researchers offered new insights into pressing public health problems, and provided a compelling retrospective on the development of the fields of microbiology and infectious diseases in the past 50 years.

Topics discussed at the meeting included the nature of host-pathogen relationships; mechanisms that enable bacteria to respond to and thrive under environmental pressures; genetic approaches to understanding and fighting M. tuberculosis resistance; public health challenges to controlling TB; and the role that technical advances like recombinant DNA, gene sequencing, and other molecular genetic tools played in revolutionizing how microbiologists study pathogenicity.

Video Interview
The Evolution of a Career in Microbiology

Issar Smith spent over 42 years at the Public Health Research Institute studying the control of sporulation and gene regulation in Bacillus subtilis and pathogenesis in Mycobacterium tuberculosis. Here he describes the highlights of his career.

Issar Smith is professor of medicine at the University of Medicine and Dentistry, New Jersey Medical School, and a member of the Public Health Research Institute. Smith completed his PhD in developmental biology at Columbia University in 1961. For the first 30 years of his career he developed genetic tools to study Bacillus sibtilis. Since 1994 he and his laboratory have been studying the genetics of Mycobacterium tuberculosis to understand how the bacterium causes tuberculosis. They have found approximately 50 M. tuberculosis genes that are more active when the bacterium infects macrophages, and are identifying and characterizing proteins that are expected to be important for virulence based on their similarity to known virulence determinants in other bacterial pathogens. Through their work, they hope to identify targets for diagnosis and treatment of tuberculosis.

Stanley Falkow is Robert W. and Vivian K. Cahill Professor in Cancer Research at the Stanford University School of Medicine. He is regarded as a pioneer in studying the genetic and molecular origins of bacterial pathogenesis. He has been influential for his argument that adverse effects of microbial infection stem not from the infection itself, but from the interaction between host and bacteria. Falkow has been named recipient of the 2000 Robert-Koch Award, and a member of the Institute of Medicine, the National Academy of Sciences, and the Royal Society. He is also a former president of the American Society of Microbiology. In 2008 he was named a winner of the Lasker-Koshland Award for Special Achievement in Medical Science.

David Dubnau is a principal investigator at the Public Health Research Institute. His lab uses Bacillus subtilis as a model system for studying transformation, the process by which bacteria take up and process environmental DNA. He is studying how proteins transport the molecule across the cell membrane, mapping the protein–protein interactions involved in the process, and investigating the dynamics of these interactions.

Richard Losick is Harvard College Professor and Maria Moors Cabot Professor of Biology at the Harvard University Department of Molecular and Cellular Biology. He is also a member of the Howard Hughes Medical Institute. He is a member of the National Academy of Sciences, a fellow of the American Academy of Arts and Sciences, a fellow of the American Association for the Advancement of Science, a fellow of the American Society of Microbiology, and a former visiting scholar of the Phi Beta Kappa Society. He was awarded the Selman A. Waksman Award in Microbiology from the National Academy of Sciences. He is on the editorial boards of Science and Cell. In his laboratory studies, Losick is working to elucidate the regulatory circuit that governs entry into sporulation, cell-specific gene expression, and the linkage of gene expression to landmark events in morphogenesis in Bacillus subtilis. Other topics of interest are protein subcellular localization, chromosome segregation, intercellular signaling, and the formation of architecturally complex communities of cells.

Brigitte Gicquel earned her undergraduate and doctoral degrees at the University of Paris VII, and joined the Pasteur Institute in 1973. She is now is head of the Institute's Mycobacterial Genetics Team. Her work has focused on the genetics of Mycobacterium tuberculosis. She was leader of the European Commission's efforts to find more efficient vaccine alternatives to bacille Calmette–Guérin (BCG) for tuberculosis as well as its TB Ethics project. She has served as editor-in-chief of the scientific journal Tuberculosis. In 2004 she was made a Chevalier of the Légion d'Honneur, France's highest order, and on World Tuberculosis Day in 2008 she was awarded the Georges, Jacques et Elias Canetti Prize.

David Russell is professor and chair of the Cornell University Department of Microbiology and Immunology. His previous appointment was as professor in the Department of Molecular Microbiology at Washington University School of Medicine. He has also held positions at the University of Kent, the Max Planck Institute in Tübingen, and NYU School of Medicine. His research program has maintained continuous funding from the National Institutes of Health for work on the biology of Mycobacterium and Leishmania. He is a Fellow of the American Association for the Advancement of Science.

Michael Iseman is professor of medicine in the Division of Pulmonary Sciences & Critical Care Medicine at the University of Colorado Health Sciences Center. He is also chief of the Clinical Mycobacteriology Service at the National Jewish Medical and Research Center in Denver. After completing a BA in history at Princeton University, he earned his MD at Columbia College of Physicians and Surgeons, served his residency at Bellevue Hospital, and was a senior resident and Fellow at Harlem Hospital. He is a specialist in tuberculosis (particularly multidrug-resistant TB) in the clinic and the community, and has authored the textbook A Clinician's Guide to Tuberculosis.

Marilynn Larkin is a medical editor, journalist, and videographer based in New York City. Her work has frequently appeared in, among others, The Lancet, The Lancet Infectious Diseases, and Reuters Health's professional newswire. She has served as editor of many clinical publications and is author of five medical books for general readers as well as Reporting on Health Risk, a handbook for journalists. She is currently head of publications for The Society for Biomolecular Sciences.

In 2004, Ms. Larkin started her own fitness consulting company (www.mlarkinfitness.com), and developed a class, Posture-cize, that helps people improve their posture, increase productivity, and reduce injury.