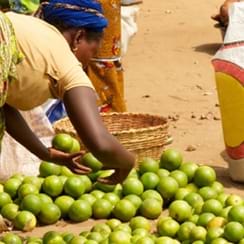 Presented by The Earth Institute at Columbia University

The UN Millennium Project began in 2002 with the goal of halving the number of hungry and malnourished people in Africa by 2015. At the heart of the project is the idea that, using existing science and technology, agriculture can become the engine for Africa's economic growth. On September 14, 2005, Pedro Sanchez of the Earth Institute at Columbia University chaired a meeting to assess the project's successes and the challenges facing it. He and other speakers discussed creative solutions to problems in the Millennium Villages, as well as institutional and political obstacles that need to be addressed if the Millennium Development Goals are to be achieved.

Use the tabs to find a meeting report and related resources.

The Earth Institute at Columbia University
Includes news and information about issues facing the planet and its inhabitants, with particular focus on sustainable development and the needs of the World's poor.

International Alliance Against Hunger (IAAH)
Read about news from Alliance members, register a pledge to end hunger, hear about national and international events.

Millennium Villages Project
In a program based at the Earth Institute at Columbia University, scientists and other development experts work with local communities and governments to help villages get out of extreme poverty.

UN Millennium Project
Contains information about the Project's goals to combat hunger, poverty, and disease; includes tips on how to take action.

World Food Summit (1996)
A transcript and video of the Summit, which was called in 1996 as part of an effort to renew global commitment to eliminate hunger and malnutrition.

Pedro Sanchez, agronomist and director of the Tropical Agriculture Program at Columbia University's Earth Institute, is a pioneer in the field of tropical soils and agroforestry. Working in South America in the 1970s and 1980s, Sanchez led an international team that transformed 75 million acres of marginal, acidic soils in Brazil into productive, arable land. He also helped Peru achieve self-sufficiency in rice productin and in reaching rice yields among the highest in the world. He has lived in the Philippines (working at the international Rice Research Institute and the University of the Philippines at Los Baños), Peru (working with the Ministry of Agriculture), and Colombia (working at the Centro Internacional de Agricultura Tropical).

Sanchez received his MS and PhD in soil science from Cornell University. In 1968 he joined the faculty at North Carolina State University, where he later became professor emeritus of soil science and forestry, a position he retains. From 1991 to 2001 Sanchez was director general of the International Centre for Research in Agroforestry, now the World Agroforestry Centre in Nairobi, Kenya. In 2002 Sanchez became a Visiting Professor of Tropical Resources at the College of Natural Resources, University of California, Berkeley. He joined the Earth Institute in 2003. He also serves as co-chair of the UN Millennium Project's Hunger Task Force. Sanchez is the author of over 200 scientific publications. His honors include the 2002 World Food Prize, the 2003 MacArthur Foundation Fellowship award, the International Soil Science Award, the International Service in Agronomy Award, and an honorary doctorate from the Catholic University of Leuven, Belgium. He was also named a Luo Elder in 2001 by the Luo Community of Western Kenya in recognition of his work in eliminating hunger from many villages in the region.

Denning received his PhD in agricultural development from the University of Reading, United Kindgom. He also has a master's degree in public administration from the John F Kennedy School of Government at Harvard University as well as Master's and Bachelor's degrees in tropical crops and pastures and soil science, respectively, from the University of Queensland, Australia. Denning has over 25 years of experience in international agricultural research and development, including projects in Bali, Indonesia, the southern Philippines, and the International Rice Research Institute. From 1998 to 2004, Denning worked for the World Agroforestry Centre in Nairobi, Kenya. He also managed the Centre's research and development programs in Sub-Saharan Africa and South Asia. As a member of the Centre's senior management committee, Denning played a major role in corporate strategy development and implementation.

Charity Ngilu is a former Minister of Health of Kenya. Before taking office, she was a member of the National Assembly of Kenya representing the Democratic Party. Ngilu was the Social Democratic candidate for the Presidency of Kenya in the 1997 elections. Since 1989, she has been a leader of the Maenbeleo ya Wanawake organization, the national women's movement. Before entering politics, Ngilu was the managing director of a food manufacturing company in Nairobi.

Cheryl Palm is a senior research scientist at the Columbia University Earth Institute. She received a PhD in soil science from the North Carolina State University and an MA and BS in zoology from the Univerisity of California, Davis. Prior to joining the Earth Institute, Palm was a visiting scholar at the University of California, Berkeley Department of Environmental Science, Policy, and Management. She also served as the senior scientific officer at the Tropical Soil Biology and Fertility Program in Nairobi, Kenya. She is a member of the editorial board of Agriculture, Ecosystems, and Environment and has received the Hugh Hammond Bennett Soil Conservation Award by North Carolina Soil Conservation Society.

Laura Buchholz is a science-educated writer and editor who has worked for the Hastings Center, Praxis.md, breastcancer.org, and Rockefeller University Press. In her other persona she writes comedy for the radio shows A Prairie Home Companion with Garrison Keillor and The Next Big Thing. She can be seen every Sunday in Saturday Night Rewritten, a live sketch show at Juvie Hall in New York City.