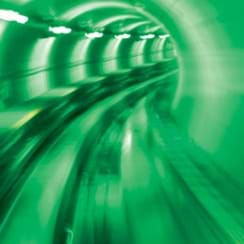 The Metropolitan Transportation Authority of New York (MTA) handles a lot of water. On a dry day, MTA New York City Transit pumps about 8 million gallons of water out of the ground—and 13 million on a rainy day—to keep the subway system running. Groundwater is treated as a nuisance and a liability.

A number of factors have led transportation leaders to rethink this approach. For one, the New York City sewer system—into which the MTA funnels its water—combines wastewater with storm water, and sewer capacity is often exceeded during a heavy rainfall. When that happens, untreated waste flows into the Hudson River and other waterways, posing a hazard to human health and the environment.

In addition, the reality of global climate change has heightened the need to limit greenhouse gas emissions and use resources wisely. To conserve resources and mitigate its impact on the environment, the MTA has been advised to explore beneficial uses for groundwater.

On December 9, 2009, the inaugural meeting of the Academy's Greening Transportation and Infrastructure Discussion Group explored two uses for that water—using it to run ground-source heat pumps to provide heating or cooling, and using it to sustain trees, green roofs, and other plantings that absorb carbon and cool the city.

The Gaia Institute
This nonprofit organization, chaired by Paul Mankiewicz, conducts projets to explore how human activities and waste products can be treated to increase ecological productivity, biodiversity, environmental quality, and economic well being.

The Geothermal Heat Pump Consortium
Learn more about how geothermal heat pumps work at the Web site of this nonprofit trade association.

Metropolitan Transportation Authority: Sustainability
Information about the MTA’s sustainability efforts, including the final report of the Blue Ribbon Commission on Sustainability and the MTA.

Thinkgeoenergy.com. 2009. DOE awards US$338 million for accelerating geothermal in the U.S. (October 30).

World Economic Forum Water Initiative. The bubble is close to bursting: a forecast of the main economic and geopolitical water issues likely to arise in the world during the next two decades.

A print journalist by training and a New Yorker by choice, Ernest Tollerson joined the Metropolitan Transportation Authority in January 2007 as the MTA’s director, policy & media relations. Prior to joining the MTA, he handled research projects for the Partnership for New York City, a business-led NGO that conducted a lot of the early research on the feasibility of a congestion-pricing zone covering Manhattan’s two central business districts.

During his nine-year stint at NY Newsday from the mid-1980s to the mid-1990s, he served as the deputy op-ed editor and an editorial writer. In May 1990, he was named editor of the editorial pages and served in that post until Times Mirror folded NY Newsday in July of 1995. That October, he joined the New York Times as a national correspondent covering the 1996 presidential election. He later served as the political editor on the metro desk and then returned to editorial writing as a member of the Times’s editorial board.

Thomas Abdallah is currently the chief environmental engineer for the Capital Program Management Department (CPM) of MTA New York City Transit. He has a BS in chemical engineering from Rutgers University in New Jersey, and is both a professional engineer and a LEED accredited professional. Abdallah has been with NYCT for 22 years, and has been in the Environmental Engineering Division of NYCT since he started as an assistant engineer in 1987.

Abdallah was both a principal engineer and construction manager and has experience with all areas of the environmental discipline including the National Environmental Policy Act, Waste Management, Air & Water Pollution Prevention, and Green Design. Abdallah is directly responsible for CPM’s ISO 14001 certified Environmental Management System which includes commitments to prevent pollution, minimize waste, save natural resources and continual improve NYCT’s environmental performance.

Past president of the Torrey Botanical Society & board member of the NYC Soil & Water Conservation District, Mankiewicz has worked to incorporate ecology to treat water, capture carbon, and lower energy costs in urban centers. A number of working models have been constructed, including the first green roof in the Bronx, the first industrial-scale stormwater treatment facility on a six-acre, truck-to-barge material handling site on the Bronx River, and the first process water/greywater treatment green roof on the Linda Tool Corporation in Red Hook, Brooklyn.

John Rhyner is a licensed professional geologist and senior project manager with P.W. Grosser Consulting in Bohemia, New York. Rhyner has 24 years of diverse consulting experience, over the past 10 years working on geothermal projects in New York City and Long Island. Rhyner has consulted on over 100 geothermal projects, currently on the anticipated LEED Gold New Education Building at Weeksville Heritage Center, Staten Island Museum geothermal retrofit at Snug Harbor Cultural Center, the General Theological Seminary, and update of NYC Department of Design and Construction’s Geothermal Heat Pump Manual. Rhyner is presently collaborating with NYCEDC and Columbia University on assessing the viability of geothermal throughout the city, including use of the technology for district heating and cooling.

Rhyner received a BA in Geology from Dartmouth College and is working towards his MS in Hydrogeology from SUNY, Stony Brook. Rhyner is a LEED accredited professional and active member of the U. S. Green Building Council and National Ground Water Association’s Geothermal Interest Group.