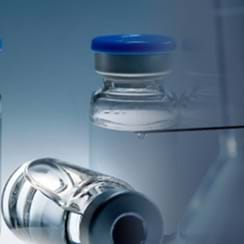 Alzheimer's disease is a dehumanizing progressive disease with no known cure; costs for caring for patients in the United States alone is about $100 billion annually and rising. Despite decades of research, the cause of Alzheimer's disease is not known, although the "amyloid cascade" hypothesis has gained the most credence. At a March 24, 2008, meeting of the Academy's Vaccines Research Discussion Group researchers discussed attempts to develop vaccines capable of preventing or treating the disease.

The abrupt discontinuation of the first clinical trial of immunotherapy in Alzheimer's patients because a subset developed meningoencephalitis led to a reassessment of vaccine approaches. Post-mortem studies revealed that even when amyloid plaques are cleared from the brain, patients may progress to severe dementia. Safer vaccines—most of which still target some aspect of Aβ-42, the protein that accumulates in plaques in brain tissue—are in development.

David Cribbs is an associate professor of neurology and a member of the Institute for Brain Aging and Dementia at the University of California, Irvine. He received a PhD in biochemistry from West Virginia University. He was awarded an NIH postdoctoral fellowship while training at the Thomas C. Jenkins Department of Biophysics at the Johns Hopkins University.

Cribbs is an author on more than 70 articles in peer-reviewed journals, has been a co-author on multiple review articles, has served on several NIH Study Section panels, and is currently a regular member of the Clinical Neuroimmunology and Brain Tumors Study Section.

The major focus of Cribbs's research over the last seven years has been in the design and development of immunotherapeutic approaches for treating Alzheimer's disease patients. More recently he has been investigating the mechanism(s) involved in antibody-mediated clearance of the amyloid peptide from the central nervous system, as well as identifying risk factors associated with adverse outcomes in response to immunotherapy in elderly Alzheimer's disease patients. Much of his current research involves animal models, transgenic mice and aging canines, that reproduce most of the classical features of Alzheimer's disease neuropathology.

Dave Morgan is a professor of molecular pharmacology and physiology at the University of South Florida. During the 1980s he worked at the University of Southern California in Los Angeles, starting as a postdoc and departing as a tenure track assistant professor. He moved to the University of South Florida three days after hurricane Andrew in 1992. At USF, he was appointed full professor in 1998 and received the President's Faculty Excellence Award in 2002. For the last 30 years Morgan's research has focused on learning and memory changes during aging, most recently investigating a transgenic mouse model of amyloid deposition to understand more about Alzheimer's disease and develop novel therapies for this disorder. Morgan received his PhD from Northwestern University.

Grant Krafft is a co-founder of Acumen and currently serves as chief science officer and chairman of the Board of Directors. He is responsible for Acumen's research and development programs and scientific strategies, and he is the author and co-inventor of Acumen's patent portfolio.

Previously, Krafft held the positions of chief technical officer of Tibotec-Virco, Belgium-based HIV therapeutics and pharmacogenomics company, and was a scientific Volwiler Fellow at Abbott Laboratories in its Diagnostics and Pharmaceutical Products Divisions.

Krafft holds a PhD in organic chemistry from the University of Illinois, Urbana–Champaign. He was an NIH postdoctoral fellow in the Chemistry Department at the University of Wisconsin, Madison. Krafft is an author on more than 75 scientific papers and a co-inventor on more than 20 issued and pending patents. He has been the principal investigator on more than a dozen NIH, NSF, ACS, and Alzheimer's Association grants and received an Alzheimer's Association T.L.L. Temple Award in 1999.

James Nicoll is a professor of neuropathology and honorary consultant neuropathologist at the University of Southampton, UK. He shares responsibility for providing the clinical diagnostic neuropathology service to the Wessex Region (a population of approximately 3 million). He is also involved in associated undergraduate and postgraduate teaching and training and undertakes research in clinical neurosciences.

Nicoll is a member of the Royal College of Pathologists and the British Neuropathological Society. He recently co-authored Adams & Graham's Introduction to Neuropathology, 3rd Edition, an introductory textbook on neuropathology.

Nicoll's major research interests are in fields of brain injury, neurodegeneration and the potential for neuroregeneration. He is particularly interested in the underlying mechanisms and how genetic variation influences disease processes in the brain.

Marilynn Larkin is a medical editor, journalist, and videographer based in New York City. Her work has frequently appeared in, among others, The Lancet, The Lancet Infectious Diseases, and Reuters Health's professional newswire. She has served as editor of many clinical publications and is author of five medical books for general readers as well as Reporting on Health Risk, a handbook for journalists. She is currently head of publications for The Society for Biomolecular Sciences.

In 2004, Ms. Larkin started her own fitness consulting company (www.mlarkinfitness.com), and developed a class, Posture-cize, that helps people improve their posture, increase productivity, and reduce injury.