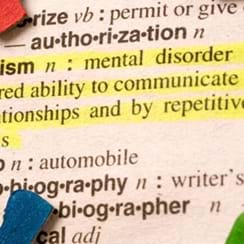 Autism spectrum disorders (ASD) affect an estimated one out of every 100 children, and those affected suffer from an array of deficits in social behavior, communication, attention, and cognition as a result. The degree of dysfunction and the specific deficits vary across individuals, making diagnosis difficult and complicating research into the underlying causes of ASD. Further, the optimal therapeutic strategy for an individual likely depends on the specific manifestation and etiology of their disorder. The goal of this meeting was to advance the current understanding of the causes of ASD and to improve the ability for early diagnosis through genetic, neuroimaging, and behavioral techniques.

At a symposium on December 1, 2010 at the New York Academy of Sciences, academic researchers in the areas of genetics, neurobiology, and psychology; industry scientists; pediatricians; and members of the public convened to discuss the latest research on the genetic basis of ASD and on new techniques for early diagnosis.

The conference began with an overview of the genetic signatures of autism spectrum disorders by Matthew State, Co-director of the Program on Neurogenetics and Associate Professor at the Yale University School of Medicine. His presentation highlighted the complexity of searching for rare genetic signatures of ASD through analysis of copy number variation. He concluded that there is certainly more than one single genetic mutation associated with ASD, that these multiple mutations were likely to be rare in the population, and that the greatest value of genetic investigations is likely to be in the illumination of underlying molecular mechanisms---in the service of developing novel treatments for ASD. Next, Brett Abrahams, Assistant Professor of Genetics and Neuroscience at Albert Einstein College of Medicine, presented data showing that genetic variation plays a substantial role in the risk of developing ASD, and that both rare and common copy number variations are associated with this risk. In addition, such risk factors do not, Abrahams clarified, play a part in ASD alone. Instead, they contribute to a range of related disorders of neurodevelopment. To handle the complicated interplay of these risk factors and to account for the complex mechanisms of ASD heritability, researchers will need to employ a combination of proven and imaginative techniques.

Ami Klin, Professor of Child Psychology and Psychiatry at the Yale Child Study Center, highlighted the need for early diagnosis and intervention in attenuating the symptoms of ASD. He presented new data on early indicators of the disorders developed through eye-tracking-based behavioral assays that quantify the social disabilities in ASD. The results of these assays were used to generate "growth charts" of normative social engagement, and the deviations from the norm were taken as early indicators of ASD. These methods yielded high sensitivity and specificity screening in children as young as 6 months of age, and they predicted a quantifiable behavioral outcome over the period in individuals' lives during which these behavioral phenotypes vary the most. The ultimate goal of Klin's work is to validate this "growth chart" for broad use by pediatricians diagnosing ASD in infants during office visits.

Tim Roberts, Professor of Pediatric Radiology at the Children's Hospital of Philadelphia, emphasized that language impairment is a core aspect of ASD and is present in a significant fraction of, but not in all, children with diagnoses of autism spectrum disorders. Abnormal auditory processing has been suggested as a neural underpinning of such impairment. Roberts presented data from magnetoencephalography (MEG, a technique for measuring brain activity with high temporal resolution) studies suggesting that electrophysiological measures of auditory processing at various developmental stages may offer diagnostic insight into ASD. His work shows that initial electrophysiological responses to auditory stimuli are delayed in individuals with ASD and that the relative timing of later responses can also help distinguish between various sub-groups of ASD by revealing different degrees of language impairment.

The final presentation of the meeting was by Paul Wang, who is trained as a developmental-behavioral pediatrician and who is currently Vice President for Clinical Development at Seaside Therapeutics. Wang reviewed the neuroscience of Fragile X syndrome (FXS) and discussed the metabotropic glutamate receptor (mGluR) theory of FXS and GABA-ergic deficits in FXS as they may relate to ASD. He also summarized recently completed clinical trials of mGluR and GABA-ergic agents in individuals with FXS. In his summary he considered the role of molecular and neurobehavioral biomarkers in these trials and their potential relevance to ASD.

John Spiro is Senior Associate Director for Research at the Simons Foundation Autism Research Initiative (SFARI). The Simons Foundation is a private foundation based in New York City dedicated to advancing research in the basic sciences and mathematics. The mission of SFARI is to improve the diagnosis and treatment of autism spectrum disorders by driving, catalyzing, and funding research of the greatest quality and relevance. Spiro earned his undergraduate degree in Biology from Haverford College and his PhD from the University of California at San Diego. His thesis was based on work in the laboratory of the late Walter Heiligenberg and his postdoctoral work was with Richard Mooney at Duke University. His research interests were in cellular and systems neuroscience, and he focused on preparations where it was possible to forge links between cellular neurobiology and behavior. In 2000 John joined Nature Publishing Group as an editor at Nature Neuroscience, where he was involved in evaluating research findings across the field of neuroscience. In 2004 he moved to Nature as a Senior Editor on the biology team. He moved to the Simons Foundation in 2007.

Brett Abrahams is interested in understanding relationships between disorders of human cognition and interplay between genes known to modulate risk. He received his PhD in Neuroscience within the Center for Molecular Medicine and Therapeutics at the University of British Columbia in Vancouver, Canada. He later carried out postdoctoral training within the Neurogenetics program at the University of California, Los Angeles. Abrahams joined the Department of Genetics at Einstein this past summer and holds a cross appointment in Neuroscience. He has published widely in journals including Nature, NEJM, PLoS Genetics, and PNAS and currently serves on the Gene Advisory Board for the Simons Foundation Autism Research Initiative.

Ami Klin is the Harris Professor of Child Psychology and Psychiatry at the Yale Child Study Center, Yale University School of Medicine. He obtained his PhD from the University of London, and completed clinical and research post-doctoral fellowships at the Yale Child Study Center. He directs the Autism Program at Yale, which is one of the designated National Institutes of Health Autism Centers of Excellence. Klin's primary research activities focus on the social mind and the social brain, and on aspects of autism from infancy through adulthood. These studies include novel techniques such as the eye-tracking laboratories co-directed with Warren Jones, which allow researchers to see the world through the eyes of individuals with autism. These techniques are now being applied in the screening of babies at risk for autism in the Simons Laboratory of Social Neuroscience in Infancy. Beginning in 2011, Klin will lead an initiative to deploy cognitive science methods in high-throughput screening for autism in infants in Atlanta. This initiative is a collaboration between the Marcus Autism Center, Children's Healthcare of Atlanta, and Emory University Department of Pediatrics.

Tim Roberts obtained his PhD from Cambridge University, England in 1992. He has subsequently been on the faculty at UCSF and the University of Toronto and is presently holder of the Oberkircher Family Chair in Pediatric Radiology and Vice-Chair for Research in the Department of Radiology at Children's Hospital of Philadelphia as well as Professor of Radiology, University of Pennsylvania. His work in 4D functional imaging using biomagnetic recording as well as advanced MRI techniques (such as diffusion tensor imaging), specifically in the study of auditory processing and language has been supported by the National Alliance for Autism Research and is presently supported by Autism Speaks, the Nancy Lurie Marks Family Foundation, the Commonwealth of Pennsylvania, and NIH. He has published in excess of 200 scientific papers, mostly in the field of physiologic and functional imaging, reviews grant proposals for NIH (standing member, DBD) and several equivalent international agencies (UK, Germany, Austria, Singapore, Israel, Cyprus, Canada, Holland), and serves on the executive committee of the American Society for Neuroradiology, the American Society for Functional Neuroradiology (President 2009–2010) and the International Society for the Advancement of Clinical MEG (President 2009–2011).

Matthew State is the Donald J. Cohen Associate Professor of Child Psychiatry, Psychiatry and Genetics at Yale University School of Medicine. He is the Vice Chairman for Research in the Department of Psychiatry and the Co-director of the Yale Program on Neurogenetics. State's laboratory studies the genetics of pediatric neuropsychiatric syndromes with a particular emphasis on autism spectrum disorders (ASD) and rare genetic variation. State currently leads a collaborative genome-wide study of copy number variation in ASD funded by the Simons Foundation involving more than 5000 individuals. He has been supported by a ARRA "grand opportunity" grant and the Simons Foundation to conduct next generation sequencing in autism using both targeted and whole exome approaches and he has collaborated with his colleagues Murat Gunel and Richard Lifton at Yale to be among the first groups to demonstrate the power of this approach to identify novel genes involved in structural brain disorders (Bilguvar et al., 2010). State is a practicing Child Psychiatrist and the research efforts in his lab are focused on the translation of molecular genetic findings into new approaches to treatment across a variety of neurodevelopmental syndromes.

Paul Wang is a developmental–behavioral pediatrician and Vice President for Clinical Development at Seaside Therapeutics, Inc. Seaside Therapeutics is working to translate the basic science of learning and memory into targeted therapies for patients with Fragile X syndrome and for patients with autism spectrum disorders. Wang is a graduate of Harvard College and of Yale School of Medicine. He also trained at the University of Michigan and the Salk Institute for Biological Sciences. Prior to joining industry, Wang served on the faculty of Children's Hospital of Philadelphia, where he cared for patients with various neurodevelopmental disabilities, and where he studied the development of language and memory in children with genetic syndromes. He remains actively engaged in the academic community, through leadership roles in the American Academy of Pediatrics (AAP) and the Society for Developmental–Behavioral Pediatrics, and in scholarly journal editorial roles. In addition, he serves regularly on advisory panels for agencies such as the AAP, NIH, and CDC, on topics related to neurodevelopmental disorders and pediatric drug development.