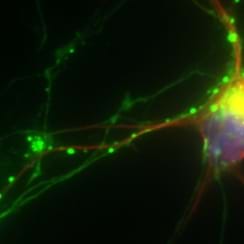 Autophagy as a Therapeutic Target in Multiple Diseases: From Molecular Mechanisms to Drug Discovery

To maintain orderly lives and remain healthy, cells rid themselves of misfolded or long-unused proteins, damaged organelles, and other junk through autophagy, a self-cannibalizing process that helps sustain a crucial balance between the production, destruction, and recycling of cellular products. This cellular "self-eating" is under tight control: either too much or too little autophagy can be catastrophic. Aberrant autophagy has been implicated in cancer, as well as inflammatory and neurodegenerative diseases. The latest advances in understanding autophagy regulation, its implications for disease, and the application of this knowledge in therapeutic design were presented and discussed at the Autophagy as a Therapeutic Target in Multiple Diseases: From Molecular Mechanisms to Drug Discovery symposium at the New York Academy of Sciences on September 25, 2012.

The Biochemical Pharmacology Discussion Group is proudly supported by:

Zdenek Berger is a senior scientist in the neurodegeneration and neurologic diseases department in the Pfizer neuroscience research unit. He leads a multidisciplinary group of scientists studying autophagy in the context of neurodegenerative disorders, setting up screens to identify targets and small molecules enhancing autophagy–lysosomal pathway. His other projects in neurodegeneration include understanding the role of LRRK2 in Parkinson's disease and developing LRRK2 kinase inhibitors as potential therapeutics. Berger obtained his PhD from the University of Cambridge, where he worked on autophagy with David Rubinsztein, and completed postdoctoral fellowships at Mayo Clinic and at Harvard Medical School. Berger has received prestigious scholarships and fellowships, including EMBO fellowship, Parkinson's disease Foundation fellowship, Lefler fellowship, Overseas Research Students Award, and Wellcome Trust Prize PhD Studentship.

Mercedes Beyna is a research scientist at Pfizer, where she is using molecular, cellular, genetic, and imaging approaches in the quest to understand the biology underlying autism spectrum disorders. Captivated by neuroscience, she has worked in the field for over 10 years, in both academic and industrial laboratory settings. Beyna attended Binghamton University, earning her undergraduate degree in biology, and subsequently received her master's degree in Biology from New York University. As an active member of the Biochemical Pharmacology Discussion Group, she enjoys developing interesting and educational symposia.

Warren Hirst is an associate research fellow and group leader in the neurodegeneration and neurologic diseases department in the Pfizer neuroscience research unit. He leads a group of nine scientists, including four Michael J. Fox Foundation-funded postdoctoral reseachers, focusing on two main projects: understanding the role of LRRK2 in Parkinson's disease and identifying LRRK2 kinase inhibitors as potential therapeutics; and determining the role of autophagy in neurodegenerative disorders, developing novel assays to identify small-molecule enhancers of autophagy and determining their mechanism of action. Hirst was previously in the Wyeth Neurodegeneration Research Department in Princeton, where he led the molecular pharmacology group, and at GlaxoSmithKline, where he led the 5-HT6 receptor antagonist program. Hirst holds a PhD from Imperial College and Guy's Hospital, London.

Jennifer Henry is the director of Life Sciences at the New York Academy of Sciences. Henry joined the Academy in 2009, before which she was a publishing manager in the Academic Journals division at Nature Publishing Group. She also has eight years of direct editorial experience as editor of Functional Plant Biology for CSIRO Publishing in Australia. She received her PhD in plant molecular biology from the University of Melbourne, specializing in the genetic engineering of transgenic crops. As director of Life Sciences, she is responsible for developing scientific symposia across a range of life sciences, including biochemical pharmacology, neuroscience, systems biology, genome integrity, infectious diseases and microbiology. She also generates alliances with organizations interested in developing programmatic content.

Ana Maria Cuervo is a professor in the Department of Developmental and Molecular Biology and the Department of Medicine of the Albert Einstein College of Medicine and is co-director of the Einstein Institute for Aging Studies. She holds an MD and a PhD in biochemistry and molecular biology from the University of Valencia, Spain and completed postdoctoral training at Tufts University. She studies in the role of protein-degradation in neurodegenerative diseases and aging. Cuervo has been invited to present the Robert R. Konh Memorial Lecture, the NIH Director's Lecture, and the Roy Walford Endowed Lecture. She is co-editor-in-chief of Aging Cell, associate editor of Autophagy, and a member of the NIH/NIA Scientific Council.

Daniel J. Klionsky holds a PhD from Stanford University and completed postdoctoral training at the California Institute of Technology. Klionsky was a professor of microbiology at the University of California, Davis until 2000 and held a Guggenheim Fellowship from 1997 to 1998. He is the Alexander G. Ruthven Professor of Life Sciences at the University of Michigan, Ann Arbor. In 2003 he received the National Science Foundation Director's Award for Distinguished Teaching Scholars, which recognizes career contributions in both teaching and research. In 2006, the National Academies of Science named him an Education Mentor. Klionsky's research focuses on protein targeting, organelle biogenesis, and autophagy in baker's yeast. Klionsky is the founding editor-in-chief of Autophagy and was elected a fellow of the American Association for the Advancement of Science in 2009.

Beth Levine is internationally recognized as a leading authority in virus-host interactions and in autophagy. Levine holds an MD from Cornell University Medical College and completed postdoctoral training in infectious diseases/viral pathogenesis at the Johns Hopkins University School of Medicine. She was previously an associate professor of medicine at Columbia University College of Physicians as Surgeons. In 2004, she became the Jay P. Sanford Professor and chief of the Division of Infectious Diseases at UT Southwestern Medical Center. In 2011, she became the director of a newly created Center for Autophagy Research at UT Southwestern and the Charles Cameron Sprague Distinguished Chair in biomedical science. Since 2008, she has been a Howard Hughes Medical Institute investigator. Levine's laboratory has made fundamental discoveries that have helped to open up a new field of biomedical research—the role of autophagy in human health and disease. Her laboratory identified the mammalian autophagy gene, beclin 1, defined a role for beclin 1, and defined the autophagy pathway in tumor suppression, antiviral immunity, development, cell death regulation, lifespan regulation, and, most recently, exercise-induced metabolism.

Ralph A. Nixon holds a PhD from Harvard University and an MD from the University of Vermont. He completed training in medicine and psychiatry at Massachusetts General Hospital. He is a professor of psychiatry and cell biology and director of the Comprehensive Center on Brain Aging and the Silberstein Alzheimer's Institute at New York University Langone Medical Center. He directs the Research and the Center for Dementia Research at the Nathan Kline Institute and is a fellow of the American College of Neuropsychopharmacology. His pioneering research first established the importance of proteases and defective proteolytic systems in the pathogenesis of Alzheimer's disease and has identified new therapeutic approaches for the disease. He serves as chairman of the Medical and Scientific Advisory Council of the National Alzheimer's Association and is a member of the Association's National Board of Directors. He serves on the CMND study section at NIH and on the Governor's Commission on Alzheimer's Disease for New York State. He is the recipient of awards including the Leadership and Excellence in Alzheimer Research, MERIT, Academic Career Leadership Awards from the National Institutes of Health, and the Zenith and Temple Discovery Awards from the Alzheimer's Association.

Eileen P. White received a PhD in biology from SUNY Stony Brook. She was a Damon Runyon postdoctoral fellow in the laboratory of Bruce Stillman at Cold Spring Harbor Laboratory. She is the associate director for basic science at the Cancer Institute of New Jersey, a professor of molecular biology and biochemistry at Rutgers University, and an adjunct professor of surgery at the University of Medicine and Dentistry of New Jersey. White has served on the Board of Scientific Counselors of the National Cancer Institute and the Board of Directors of the American Association for Cancer Research (AACR). White currently serves on the Scientific Review Boards for the Starr Cancer Consortium and the Cancer Prevention Research Institute of Texas, and is a member of the Board of Scientific Advisors for the AACR. She is on the editorial boards of Genes & Development, Cancer & Metabolism, Oncogene, Cancer Prevention Research, Molecular Cancer Research, Autophagy, Cell Death & Disease, and Cancer Discovery. White is an elected fellow of the American Society of Microbiology and the American Association for the Advancement of Science.

Richard J. Youle holds a PhD from the University of South Carolina, where he worked on the protein toxin ricin. He joined the lab of David Neville at the National Institute of Mental Health for postdoctoral work on the engineering of cell-type-specific protein toxins. At the Surgical Neurology Branch of National Institute of Neurological Disorders and Stroke he has developed new treatment strategies for brain tumors. His lab is now exploring the molecular mechanisms of programmed cell death and the role of mitochondria in neurodegenerative disorders.

After PhD training in biochemistry and cell biology at University of Medicine and Dentistry of New Jersey/Rutgers and postdoctoral work in mouse genetic study of neurodegeneration, Zhenyu Yue became an independent investigator at Mount Sinai School of Medicine. He is now an associate professor and head of the Molecular and Cellular Neurobiology Laboratory in Department of Neurology and Neuroscience, Friedman Brain Institute. Yue has been a pioneer in autophagy research in the central nervous system. He edited the book Autophagy of the Nervous System. The long-term goal of the Yue Laboratory is to understand cellular and molecular mechanisms of autophagy regulation in the CNS and neurodegeneration. His team also investigates the formation and degradation of disease protein aggregates, develops genetic models for neurodegenerative diseases, and identifies biological and chemical probes for modifying disease process. Yue's primary research areas include Parkinson's disease, Huntington's disease, and Alzheimer's disease. Yue received research awards and grants from Michael J. Fox Foundation for Parkinson Research, Bachmann-Strauss Dystonia and Parkinson Foundation, CHDI Foundation, and National Institutes of Health/National Institute of Neurological Disorders and Stroke.

Hema Bashyam holds a PhD in Immunology and Virology from the University of Massachusetts Medical School for her study of human immune responses to secondary dengue virus infections. She enjoys writing about basic research in creative, compelling ways for a diverse audience that includes scientists, clinicians, and lay readers. She lives in eastern Long Island.

The Biochemical Pharmacology Discussion Group is proudly supported by: