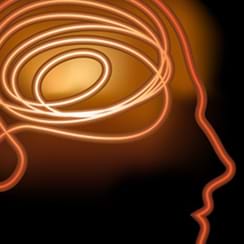 BACE1 and Alzheimer's Disease: Targeting a Link in the Amyloid Pathway

The amyloid hypothesis attributes the cognitive decline and brain damage seen in Alzheimer's disease to the buildup of extracellular amyloid-β peptide (Aβ), which over time forms plaques and oligomers in the brain. Amyloid-β generation is initiated by the cleavage of amyloid precursor protein (APP) by β-secretase, now known to be a transmembranic aspartic protease.

Beta-site APP cleaving enzyme (BACE1, also known as memapsin-2 and Asp-2) was first cloned and identified as the brain β-secretase enzyme in 1999 by five separate groups. At the March 24, 2009, meeting of the Biochemical Pharmacology Discussion Group, four out of five of the researchers who discovered BACE1 reviewed the state of the art of drug development focused on this enzyme, describing a few bright spots and some unexpected new findings about its role in the Aβ production pathway.

Robert Vassar received his PhD in molecular genetics and cell biology from the University of Chicago in 1992. He did his graduate work in the lab of Elaine Fuchs, modeling epidermal diseases in transgenic mice. Vassar then did his postdoctoral fellowship in the lab of Richard Axel at Columbia University on the organization of odorant receptors in the olfactory system. Having a desire to study Alzheimer's disease (his mother died of the disorder), Vassar joined the biotechnology company Amgen in 1996 as a research scientist in the neuroscience department, where he co-discovered the b-secretase enzyme, BACE, with Martin Citron. After leaving Amgen in 2001, Vassar joined the faculty of the Feinberg School of Medicine, Northwestern University, Chicago, where he is professor of cell and molecular biology and continues his work on BACE and mechanisms of Alzheimer's disease pathogenesis.

Lisa McConlogue got her education at UCLA in mathematics and biophysics and postdoctoral training at UCSF in cellular genetics and molecular biology. At Athena Neurosciences and Elan Pharmaceuticals she was at the forefront of elucidating APP processing pathways and development of Alzheimer's disease transgenic mouse models including establishing the PDAPP model and the cloning of BACE1. She further explored the role of APP processing and BACE1 in the development of pathology in the PDAPP model. Lisa is now a research fellow at Elan Pharmaceuticals where she heads the Molecular Genetics group and leads the Parkinson's disease project.

Jordan J.N. Tang is the J.G. Puterbaugh Chair in Medical Research at the Oklahoma Medical Research Foundation and adjunct professor in the Department of Biochemistry and Molecular Biology at the University of Oklahoma Health Sciences Center.

Tang received his PhD from the University of Oklahoma in 1961. He joined the Oklahoma Medical Research Foundation in 1966. His awards include the 1964 Guggenheim Fellowship and the 2000 Pioneer Award from the Alzheimer's Association. He is a fellow of the American Association for the Advancement of Science.

Ishrut Hussain is an investigator in the Neurosciences Centre of Excellence for Drug Discovery at GlaxoSmithKline R&D. She graduated from the University of Leeds, UK with a BSc (Hons) degree in biochemistry and microbiology. She also completed her PhD at the University of Leeds, focusing on the proteolytic processing of APP and presenilins in Alzheimer's disease. Following her PhD, she embarked on a career in the pharmaceutical industry at SmithKline Beecham, Harlow, UK. Her research was focused on the identification and characterization of APP-secretases and these efforts led to the discovery of β-secretase at SmithKline Beecham in 1999. In subsequent years, she championed drug discovery efforts aimed at developing BACE1 and β-secretase inhibitors. More recently, she is supporting the development of therapeutic treatments for schizophrenia and cognitive diseases.

David Riddell is associate director in the Neurodegeneration Group at Wyeth Research. He graduated from the University of St. Andrews, Scotland with a BSc (Hons) in biochemistry and completed his doctorate research at University College London in 1997. In 2000, Riddell joined the Department of Neurodegeneration Research at GlaxoSmithkline, where he joined pharmaceutical efforts at inhibiting the newly discovered BACE1 enzyme. In 2004, Riddell joined Wyeth Neuroscience and is currently head of a team of eight scientists targeting multiple disease-modifying mechanisms for Alzheimer's disease. Although Riddell's primary role is driving drug discovery efforts surrounding APP processing, his Alzheimer's research has focused on identifying the physiological role for APP and its processing and how this impacts the pathogenesis of this debilitating disease.