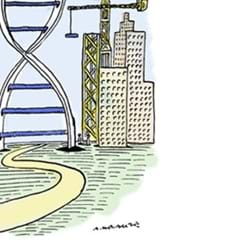 Bioscience Research: Where the Jobs Are

On June 23, 2004, two of the New York area's most esteemed science organizations partnered to sponsor an innovative career fair and symposium. Bioscience Research: Where the Jobs Are, co-sponsored by Naturejobs and the Academy's New York Science Alliance, drew several hundred graduate students and postdocs to New York University's Kimmel Center.

Speakers and exhibitors from more than 20 leading research institutions participated in the event. The panel discussions and breakout sessions asked where bioscience is heading, where to spot the most exciting career paths to the future, and where the jobs are today. Panel 1 focused on pharmaceuticals—a sector increasingly marked by consolidation and by a move away from discovery to development. Members of panel 2 described how some of the traditional discovery work embraced 20 years ago by pharma is shifting to biotechnology. Panel 3 members looked at how job seekers could find solid opportunities in academia, where future growth is definitely under threat.

This conference and eBriefing were made possible with support from:

Each Career Fair participant also has an online careers page.

Biospace
Here the focus is on biotechnology, including BioBuzz.

Naturejobs
Nature offers not just a job listing, but comprehensive base of background and news related to careers in science, including employer profiles and hot events. There is also a direct channel to careers in the life sciences and to advances in drug discovery.

Science Alliance
Zoom in on careers, with your source at the Academy's own Science Alliance for Graduate Students and Postdocs. The extensive links and exclusive resources describe everything from "alternative career portals" to "resumes that sell."

PhDs.org
These links to science, math, and engineering career resources—from specifics of employers to "the big picture"—are sorted by user rating.

Science Careers
Published by the American Association for the Advancement of Science and Science magazine, this site has "recruit" in its URL for good reason. Look to Science NextWave for additional news.

Yahoo! Finance: Biotechnology and Drugs
Surf away at this industry portal.

Andy Baxevanis is deputy director for intramural research and the director of the computational genomics program at the National Human Genome Research Institute, National Institutes of Health. He received his PhD in biology at Johns Hopkins University in 1991 continued his postdoctoral work at the NIH National Center for Biotechnology Information, concentrating on the core histones and high-mobility-group proteins from an informatics standpoint. Baxevanis's current research focuses on structure-function relationships in the homoeodomain class of proteins and how mutations in these proteins contribute to human disease. His group is also involved in the identification of key human disease genes, as well as in the development of methods for the analysis of sequence and gene expression microarray data.

Baxevanis is co-author of Bioinformatics: A Practical Guide to the Analysis of Genes and Proteins, editor-in-chief of Current Protocols in Bioinformatics, senior editor of Molecular Cancer Therapeutics, and associate editor of Proteins: Structure, Function, and Bioinformatics. He has also served as executive editor for the Database Issue of Nucleic Acids Research. He has taught bioinformatics at Johns Hopkins, served as an adjunct faculty member at Boston University, and helped develop the User's Guide to the Human Genome, a supplement to Nature Genetics. He received the Bodossaki Foundation's 2000 Academic Prize in medicine and biology, awarded to young academics and scientists of Greek heritage.

Ron Cohen is president, founder, and CEO of Acorda Therapeutics, a biotechnology firm in Hawthorne, NY. He was previously a principal in the startup of Advanced Tissue Sciences, Inc., a biotechnology company engaged in the growth of human organ tissues for transplantation uses.

Cohen received his MD from the Columbia College of Physicians and Surgeons. He completed a residency in Internal Medicine at the University of Virginia Medical Center and is board certified in internal medicine. Cohen serves as the chairman of the board of the New York Biotechnology Association (NYBA) and on the board of directors of Ceregene, Inc. He also serves on the advisory editorial board of BioPeople magazine and as a member of the Columbia-Presbyterian Health Sciences Council.

After four years as medical director at Glaxo's R&D headquarters in London, he returned to Pfizer in 1996 and served as vice president, responsible for U.S. Pharmaceuticals' Clinical Development, Outcomes Research, and Medical Planning. Feczko is a board-certified internist and infectious disease specialist, with his MD from the University of Illinois College of Medicine.

Neil Gibson is vice president for research at OSI Pharmaceuticals, focused on the discovery, development, and commercialization of high-quality, next-generation oncology products that both extend life and improve the quality-of-life for cancer patients worldwide. OSI's drug discovery efforts focus on two core biological processes—signal transduction pathways that either drive proliferation or prevent apoptosis. Its oncology drug candidates also include next-generation cytotoxic chemotherapy agents. Its most advanced drug candidate, Tarceva, a small-molecule inhibitor of the HER1 gene, has successfully completed phase III clinical trials for lung cancer.

Gibson joined OSI in 2001, after serving as the director for cancer research at Bayer. He served as senior research investigator at Pfizer and played an integral role in OSI's cancer collaboration with Pfizer. He was also associate professor in the school of pharmacy and Comprehensive Cancer Center, University of Southern California, and Fogarty Fellow at the National Cancer Institute, National Institutes of Health. Gibson has served on the Experimental Therapeutics Study Section of the National Cancer Institute and has been actively involved with the American Association of Cancer Research.

Steve Projan is assistant vice president, protein technologies, at Wyeth Research. Projan earned his PhD from Columbia University in 1980 under Jim Wechsler, developing the first in vitro system that initiated chromosomal DNA replication from the E. coli origin of replication. Projan then became a postdoctoral fellow and later associate at the Public Health Research Institute, continuing his work on plasmid replication, antibiotic resistance, and staphylococcal virulence. In 1987 Projan also became a senior scientist and then group leader at Applied Microbiology, working on antimicrobial enzymes and bacteriocins. There he developed a protein-based method for the prevention of bovine mastitis and a protein-expression system for the production of an anti-staphylococcal protein that is soon to enter clinical trials.

At the end of 1993 Projan moved to Lederle Laboratories, now a part of Wyeth Research. At Wyeth, he has served as leader of the glycylcycline discovery team that produced tigecycline, currently in Phase III clinical trials for staphylococcal diseases, has served as a member of several N.I.H. study sections and on four editorial boards, is a member of the Interscience Conference on Antimicrobial Agents and Chemotherapy Program Committee, and is currently chair-elect for Division A of the American Society for Microbiology. He also makes an award winning cheesecake, explaining, in part, Projan's 44-in. waistline.

Eric Rose is chair of the department of surgery at Columbia University College of Physicians and Surgeons. He is also associate dean for translational research and surgeon-in-chief at Columbia University Medical Center and director of cardiothoracic services at St. Michael's Medical Center in Newark. His work focuses on novel anticoagulants, vascular biology, mechanical alternatives to transplantation, surgical clinical trials, and outcomes research.

Neil Stahl is of senior vice president of preclinical development and biomolecular science for Regeneron Pharmaceuticals. He earned his PhD from Brandeis University in 1985, working with William P. Jencks on hydrogen bonding between small molecules in water and on the catalytic mechanism of the calcium ATPase. He pursued postdoctoral studies with Stanley B. Prusiner at the University of California, San Francisco, where he investigated the chemical structure, post-translational modifications, and replication mechanism of prions—the mysterious infectious agent responsible for scrapie and BSE (mad cow disease).

Stahl joined Regeneron in 1991, with work that initially focused on the receptor activation mechanism and signal transduction pathways for cytokines such as ciliary neurotrophic factor, interleukin-6, and leukemia inhibitory factor. Insights into the mechanism of cytokine receptor activation led he and his colleagues to create cytokine traps, which are soluble receptor-based antagonists that are the most potent blockers of cytokine action that have yet been described. Three cytokine traps are currently in clinical trials—an IL-1 trap for inflammatory disease, a VEGF trap for cancer and eye diseases, and a trap that blocks both IL-4 and IL-13 that is currently being evaluated in asthma.

William Tucker is a writer for The American Enterprise.