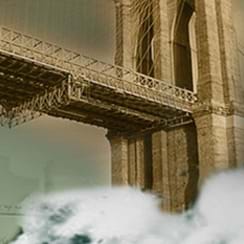 The New York City region abuts a vast amount of water, and much of the settled area is practically at sea level. During this century, it is predicted that rising sea levels will aggravate storm surges along the New York City metro region coast, causing more severe and more frequent flooding, leaving real estate, infrastructure, wastewater treatment systems, roadways, and fragile ecosystems vulnerable.

One proposal to mitigate the effects of a destructive storm surge involves erecting storm surge barriers in the waters off New York City. A January 12, 2005, meeting of the Academy's Environmental Sciences Section featured two researchers who have looked extensively at the feasibility, cost, and environmental impacts of doing so.

Deltawerken
This site offers a fascinating look at the Netherlands's extensive coastal water management system. Note the map that displays the locations of storm surge infrastructure.

DHI Water and Environment
This independent consulting and research organization is authorized as a Technological Service Institute by the Danish government. Among its broad range of services: hindcast studies of major storms; a Web-based service employing operational hydrodynamic models and real-time data to provide real-time forecasts of storm behavior. Its staff numbers approximately 450; it has conducted projects in more than 140 countries.

ESCAPE
ESCAPE (European Solutions by Co-operation and Planning in Emergencies for coastal flooding) offers detailed information on flood prevention measures. Its Delta 2003 web pages describe the evolution of the Netherlands's storm surge barriers, including the effects of environmental concerns on engineering design.

New York Sea Grant
Part of NOAA's National Sea Grant Program, this statewide network of research, education, and extension services promotes wise use and protection of marine and Great Lakes resources—as NYSG puts it, "bringing science to the shore." Its institute is located at Stony Brook, where Malcolm Bowman and Doug Hill conduct their research, and it's a co-sponsor of their projects, formally titled "Hydrologic Feasibility of Storm Surge Barriers to Protect the Metropolitan New York-New Jersey Region" and "Coastal Early Warning for Emergency Response and Protection against Flooding in Metropolitan New York."

Stony Brook Storm Surge Research Group
This is speakers' research project. Its Web site includes descriptions of the MM5 and ADCIRC models, as well as data and predictions for each of the group's research stations.

Rosenzweig, C., W. Solecki, C. Paine et al. 2001. Climate change and a global city: the potential consequences of climate variability and change. CIESIN/Metropolitan East Coast Assessment, Columbia University. Full Text
Doug Hill was one of many contributors to this study, which was one of eighteen organized by the U.S. Global Change Research Program.

Malcolm J. Bowman is professor of physical oceanography and distinguished service professor at Stony Brook University's Marine Science Research Center, which he joined in 1971. He leads the Stony Brook Storm Surge Research Group, which works to model and predict storm surges that threaten the New York metropolitan area. The group is also investigating how the region can be protected from flooding from extreme weather events that will be aggravated by global warming and sea level rise.

Between 1996 and 1999, Bowman took leave from Stony Brook University to return to his native New Zealand to serve as founding head of the School of Environmental and Marine Sciences at Auckland University. There he developed a keen awareness of and interest in the role marine reserves and wilderness areas can play in marine conservation and fisheries rehabilitation. He is a director of the Environmental Defence Society (NZ), an honorary professor of physics at Auckland University, and a distinguished member of the National Society of Collegiate Scholars.

Douglas Hill is a consulting engineer and an adjunct lecturer at Stony Brook University's Marine Sciences Research Center. He is involved in both research and policy concerning global climate change and its consequences for the New York metropolitan area. Hill has focused on issues related to urban planning and energy infrastructure within the context of climate change. He has served as a consultant to several energy-related agencies and organizations, including the Regional Plan Association, the International Energy Agency, and Brookhaven National Laboratory, where he helped to develop the MARKAL model of the New York State energy system for projecting future energy supply and demand technologies.

Hill has edited two volumes in Annals of the New York Academy of Sciences: The East River Tidal Barrage: A Symposium on a Multipurpose Addition to New York City's Infrastructure (1994) and The Baked Apple? Metropolitan New York in the Greenhouse (1996). He has also contributed to a Columbia Earth Institute's study, Climate Change and a Global City: The Potential Consequences of Climate Variability and Change: Metro East Coast (2001).

Hill holds doctor of engineering science and MS degrees from Columbia University and is licensed as a professional engineer in New York State.

Klaus H. Jacob is senior research scientist at Columbia University's Lamont-Doherty Earth Observatory. He received his PhD in geophysics (seismology) from the University of Frankfurt in 1968. During the first two of his almost four decades at Columbia, his research focused on basic seismotectonics and plate-tectonic processes. From 1986 to 1998 his focus shifted to probabilistic seismic hazard assessment and engineering seismology, mostly for large infrastructure projects.

Jacob served on the review panel for the USGS/NEHRP National Seismic Hazard Maps for the contiguous United States and Alaska and coauthored the national model and the New York City seismic building codes. He developed methods of wireless vibration measurements for modal spectral analysis of large bridges and skyscrapers.

Christine Van Lenten is a freelance writer who has written about widely varied subjects for the Academy. She has also written about public policy issues and technical and scientific subjects—many of them in the environmental field—for federal and state agencies, nonprofit organizations, and private sector firms.