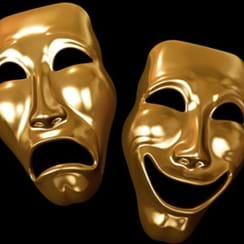 Bipolar disorder is a severe mood disorder with physiological consequences that include brain shrinkage, functional changes in brain activity, and cellular ionic imbalances. The biology and cause of the illness remain unknown, as are the therapeutic mechanisms of action of lithium, a major treatment for the illness.

Researchers convened at the Academy on December 15, 2009, to discuss new approaches toward understanding bipolar disorder and the development of more effective treatment for the illness. Topics discussed included new animal models for bipolar, genetic and genomic analyses, and possible biomarkers for the illness.

Gould Lab
Speaker Todd Gould of the University of Maryland hosts several videos of commonly used behavioral experiments such as the forced-swim test, used as a proxy for antidepressant efficacy, and the elevated-plus maze, in which the animal's response is seen as a signal of its tolerance for risk.

Niculescu Lab
Alexander Niculescu's laboratory of neurophenomics includes an explanation of convergent functional genomics and a description of current research, including recent data.

Ashkenazy T, Einat H, Kronfeld-Schor N. 2009. We are in the dark here: induction of depression- and anxiety-like behaviors in the diurnal fat sand rat, by short daylight or melatonin injections. Int. J. Neuropsychopharmacol. 12: 83-93.

Haim Einat is an associate professor at the College of Pharmacy, University of Minnesota and at the Department of Psychology, Tel-Hai College, Israel. Einat holds graduate degrees in Zoology (Tel-Aviv-University, Israel), Neuroscience & Biobehavioral Sciences (McMaster University, Canada) and Psychopharmacology (Ben-Gurion University, Israel) and received further post-doctoral training at the NIMH. Einat's work is centered on the development and utilization of animal models in the context of studying the underlying biology of affective disorders with emphasis on bipolar disorder. He is the author of over 65 scholarly publications, a current holder of a NARSAD independent investigator award and a previous recipient of a NARSAD young investigator award and a British Association of Pharmacology Preclinical Prize. Einat is an associate editor of Frontiers in Psychopharmacology, on the editorial board of Behavioural Pharmacology, Research & Reviews in Biosciences, a review editor for Frontiers in Behavioral Neuroscience, and an ad hoc reviewer for over 30 scientific journals.

Rif El-Mallakh received his MS in biology and his MD degrees from the University of Illinois. He completed a medical internship and one year of a neurology residency before completing an adult psychiatry residency at the University of Connecticut. He spent three years as a clinical research fellow with the late Richard Wyatt's Neuropsychiatry Branch at the NIMH where he became acquainted with modern research techniques. He joined the faculty of the Department of Psychiatry at the University of Louisville in 1992. He developed his clinical psychopharmacology skills under Barbara Kennedy. For the last 20 years he has focused his research on the pathophysiology of bipolar illness and has performed basic work regarding ion dysregulation and development of an animal model in this disorder. His clinical research has focused on lithium, bipolar depression, and the development of new therapeutic agents in the management of bipolar illness. He has published nearly 200 pear reviewed papers, has been funded by NARSAD, NIMH, and the pharmaceutical industry, has served as reviewer for both NIMH and the Canadian Research Council as well as reviewer for several psychiatric publications and smaller granting agencies. He has received over 24 awards, including the Gerald L. Klerman Young Investigator from the National Depressive and Manic Depressive Association and multiple Golden Apple teaching awards from the residents he enjoys working with.

Todd D. Gould, MD (University of Virginia) is an Assistant Professor of Psychiatry, within the University of Maryland School of Medicine Mood and Anxiety Disorders Program. He completed fellowship training at the National Institute of Mental Health (NIMH) Laboratory of Molecular Pathophysiology and Experimental Therapeutics where he held positions as the NIMH Seymour S. Kety Memorial Research Fellow and Lilly/NIMH Neuroscience Research Fellow. His research uses behavioral and molecular approaches to study the pharmacology of psychotropic medications in rodents with a particular focus on the development of improved animal models in psychiatry, the functional consequences of mood disorder susceptibility genes, and collaborative translational studies with clinically focused research groups. He is editor of the recently released book, Mood and Anxiety Related Phenotypes in Mice: characterization using behavioral tests.

Alexander Niculescu is a practicing psychiatrist and molecular geneticist at Indiana University School of Medicine and Indianapolis VA Medical Center. He was educated and trained at the University of Bucharest, University of Geneva, Scripps and UC San Diego. Niculescu and collaborators have developed novel methodological and conceptual approaches, as well as carried out groundbreaking translational work on genomics, biomarkers and phenomics of major psychiatric disorders. Niculescu is the recipient of several major awards and prizes, including APA/AstraZeneca Young Minds in Psychiatry International Award, NARSAD Young Investigator Award (twice), and the Theodore Reich Award from the International Society for Psychiatric Genetics.