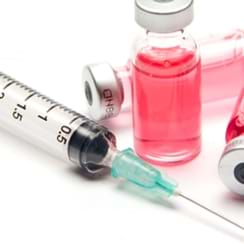 Despite the longstanding use of chemotherapy and radiation treatments, cancer is still the second most common cause of death in the U.S., exceeded only by heart disease; according to the American Cancer Society, the 5-year relative survival rate for all cancers is less than 70%. Vaccination and immune modulation are novel and potent treatment strategies, aiming to harness the immune system to combat tumors by repressing tumor tolerance mechanisms and/or enhancing the immune response to recognize and kill cancerous cells. Although a first generation of cancer vaccines was found to be safe, and effectively induced tumor-specific immune responses, these vaccines failed to demonstrate any significant positive clinical outcomes. The Cancer Vaccines and Cancer Immunotherapy & Immunomodulation symposium, presented on May 15, 2012 by the Academy's Biochemical Pharmacology Discussion Group and the New York Chapter of the American Chemical Society, convened researchers from academia and the biomedical industry to discuss new advances in our understanding of cancer immunology, progress in vaccine development, and recent clinical trials applying different immunomodulatory strategies. This symposium focused on the second generation of emerging therapies and vaccines, which employ strategies that account for the immunosuppressive tumor microenvironment and address the need to elicit tumor-specific immune responses with increased tumor-killing efficacy.

This meeting was part of our Translational Medicine Initiative, sponsored by the Josiah Macy Jr. Foundation.

Eyal Talor joined CEL-SCI Corporation in October 1993 and is currently CEL-SCI's Chief Scientific Officer. Before cming to CEL-SCI, he was Director of R&D and Clinical Development at CBL, Inc. and Principal Scientist (Project Director, and Clinical Laboratory Director) at SRA Technologies, Inc. Talor is a clinical immunologist with over 20 years hands-on management of clinical research and drug development for immunotherapy application from pre-clinical to Phase III. Talor's expertise includes: biopharmaceutical R&D and biologics product development, GMP manufacturing, quality control, biological assays, analytical methods development and validation, and the design and building of GMP manufacturing and testing facilities. He holds two U.S. patents: 1) Multikine's composition of matter and method of use in cancer and 2) a platform Peptide technology ('Adapt') for the treatment of autoimmune diseases, asthma, allergy, and transplantation rejection. He also holds one European and one Chinese patent on Multikine. Talor received his PhD in Microbiology and Immunology from the University of Ottawa and had post-doctoral training in clinical and cellular immunology at Johns Hopkins University, where he was active Faculty and is now an Adjunct Associate. Talor has been teaching a post-graduate course in clinical immunology at Johns Hopkins University Medical Institutions for the past 24 years.

George Zavoico is Managing Director of Research and a Senior Equity Research Analyst at MLV & Co., a boutique investment bank and institutional broker-dealer based in New York. He has over 6 years of experience as a life sciences analyst, writing on publicly traded equities. Prior to MLV, he was an equity analyst with Westport Capital Markets and Cantor Fitzgerald. Prior to working as an analyst, Zavoico established his own consulting company serving the biotech and pharmaceutical industries by providing competitive intelligence and marketing research, due diligence services, and guidance in regulatory affairs. He also wrote extensively on healthcare and the biotech and pharmaceutical industries for periodicals targeting the general public and industry executives. Zavoico began his career as a Senior Research Scientist at Bristol-Myers Squibb Co., moving on to management positions at Alexion Pharmaceuticals, Inc. and T Cell Sciences, Inc. (now Celldex Therapeutics, Inc.). He has a BS in Biology from St. Lawrence University and PhD in Physiology from the University of Virginia, and he has held post-doctoral positions at the University of Connecticut Health Sciences Center and Brigham and Women's Hospital and Harvard Medical School.

Jennifer Henry is the Director, Life Sciences at the New York Academy of Sciences. Henry joined the Academy in 2009, before which she was a Publishing Manager in the Academic Journals division at Nature Publishing Group. She also has eight years of direct editorial experience as Editor of Functional Plant Biology for CSIRO Publishing in Australia. She received her PhD in plant molecular biology from the University of Melbourne, specializing in the genetic engineering of transgenic crops. As Director of Life Sciences, she is responsible for developing scientific symposia across a range of life sciences, including biochemical pharmacology, neuroscience, systems biology, genome integrity, infectious diseases and microbiology, under the auspices of the Academy's Frontiers of Science program. She also generates alliances with organizations interested in developing programmatic content.

Francesco Marincola is Chief of the Infectious Disease and Immunogenetics in the Department of Transfusion Medicine at the Clinical Center of the National Institutes of Heath in Bethesda, Maryland. He is also Associate Director of the Trans-NIH Center for Human Immunology and Director of the FOCIS Center for Excellence at NIH. Marincola received his MD from the University of Milan and his surgery training at Stanford University, where he also completed a postdoctoral fellowship in surgical research. He joined the Surgical Oncology Branch of the National Cancer Institute (NIH) in 1990. Marincola is a NIH-tenured Senior Investigator; an Adjunct Professor at Peking Union Medical College in Beijing; an Adjunct Professor at First Military Medical University in Tonghe, China; the President Elect of the Society for the Immunotherapy of Cancer; and the President Elect of the International Society for Translational Medicine. Marincola serves on the editorial board of several journals, including the Journal of Translational Medicine; Immunotherapy; the Journal of Immunotherapy and Clinical Cancer Research; Cancer Immunology & Immunotherapy; and the Journal of Experimental and Clinical Cancer Research. Marincola is an author of over 450 peer reviewed research articles and over 100 abstracts. He has been invited to speak at over 200 national and international meetings and is the second most cited scientist in melanoma during the last ten years.

SangKon Oh received his PhD in Viral Immunology at Johns Hopkins University in 2000 and trained at NCI, NIH. Oh joined BIIR as an Assistant Investigator in 2005 and now serves as an Associate Investigator. Oh is also an Associate Professor at Baylor Institute for Immunology Research. Oh's research has focused on the characterization of human dendritic cell subsets and their distinct functions in directing T and B cell responses. As a part of his research, Oh has played a key role in developing DC targeting vaccines. In particular, Oh's laboratory has uncovered novel immunological functions of DC surface lectins in controlling host immune responses toward either immunity or tolerance. Oh's study will help us understand the fundamental roles DCs play in controlling host immune responses toward both immunity and tolerance.

Andrew Parsa is Professor and Vice Chairman of the Department of Neurological Surgery at the University of California, San Francisco. He is a practicing neurosurgeon specializing in adult brain and spinal cord tumors. Parsa has extensive research interests including the development of a brain tumor vaccine and has led a national effort to treat glioblastoma patients with an autologous heat shock protein based vaccine. His research has been continuously funded by the NIH since 2002 and he has published in high impact journals including Nature Medicine, Oncogene, and Cancer Research. Parsa is the first recipient of the Reza and Georgianna Khatib Endowed Chair in Skull Base Tumor Surgery.

Rachel L. Sabado received her BS in Microbiology from the University of California San Diego and her PhD in Biological Sciences from the New York University School of Medicine. Her past work involved understanding HIV and Dendritic cell (DC) interactions, including the pathways utilized by DCs to activate HIV-specific T cell responses, priming naïve T cell responses, and the early effects of HIV infection on DC subset numbers and function in vivo. Her current research interests include using DCs and TLR agonists as adjuvants for modulating immune responses against cancer and HIV.

John Yu earned his Bachelor's in French Literature and Biological Sciences from Stanford University and pursued a fellowship in immunology at the Institut Pasteur in Paris. He earned his medical degree from Harvard Medical School and an MS from the Harvard University Department of Genetics. Yu completed his neurosurgical residency at Massachusetts General Hospital in Boston. He is the Director of Surgical Neuro-Oncology and a Professor of Neurosurgery at Cedars-Sinai Medical Center. Yu's clinical focus is on the surgical treatment of malignant and benign brain tumors and he is conducting research in immune and stem cell therapies for brain tumors. Yu founded Immunocellular Therapeutics in 2006.

Jessica Schneider is a doctoral candidate in the department of Immunology at Sloan-Kettering Institute, through Weill Cornell Graduate School of Medical Sciences. Jessica has a longstanding interest in microbes, vaccine development, and novel antimicrobial therapeutics, as well as how all these fields come together in the realm of public health. Her doctoral research focuses on understanding the molecular components of a signaling cascade crucial for virulence in Mycobacterium tuberculosis.

This meeting was part of our Translational Medicine Initiative, sponsored by the Josiah Macy Jr. Foundation.