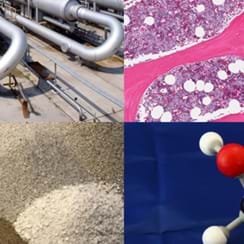 Chemical Engineering Approaches to Challenges in Energy and Biomedicine

As the human population continues to grow, demand for more energy and for high quality healthcare increases. At the forefront of tackling both of these issues are chemical engineers, who are crucial to meeting the energy demands of the future and whose innovations promise higher quality healthcare for our growing population. Chemical engineers gathered at the New York Academy of Sciences on March 30, 2012 for the Chemical Engineering Approaches to Challenges in Energy and Biomedicine symposium to discuss new and innovative ways to harness the Earth's energy resources through natural solar or biochemical processes as well as to generate creative solutions to healthcare problems. Importantly, this symposium represents the first such meeting of chemical engineers in the New York metropolitan area, bringing together individuals from academia, industry, and government sectors.

Speakers from the energy sector discussed the current state of energy usage and production in the United States. Several researchers discussed their own exciting projects that aim to improve biofuels and to extend the lifetime of traditional batteries. Speakers on the topic of biomedical engineering presented several ways that high-tech analytical techniques can be used to improve large-scale production of tablet medicines. Additionally, researchers discussed their innovative work on improving stem cells for therapeutic applications and on designing biologically-inspired molecules.

Note: The Steering Committee welcomes feedback and suggestions for topics for future meetings.

Amos Avidan is a Senior Vice President and Bechtel's Corporate Manager of Engineering and Technology. Prior to assuming his current role in 2010, Avidan was General Manager of Strategic Planning, Marketing & Business Development and Technology for the Bechtel Oil, Gas & Chemicals, Inc. His previous assignments in Bechtel included Manager of Technology, Project Director of the Equatorial Guinea LNG project, and General Manager of Operations, LNG. Avidan joined Bechtel in 2000, and was elected a Principal Vice President and a Bechtel Fellow in 2001. He was elected Senior Vice President of Bechtel in 2007. Prior to joining Bechtel, Avidan was employed by Mobil Technology Company in a variety of assignments, including manager of Catalytic Cracking, manager of Upstream Surface Engineering, and VP of LNG technology. Avidan has received a PhD degree in Chemical Engineering from the City University of New York in 1980. He has authored and co-authored more than 70 books and technical publications and 31 US patents. Amos has served as a director of the American Institute of Chemical Engineers (AIChE). He is a Fellow of the AIChE, and in 2009 he was elected to the US National Academy of Engineering.

Mauricio Futran is Professor and Chair of Chemical and Biochemical Engineering at Rutgers University. He came to this position after 28 years of pharmaceutical product and process development work at Merck and Co. and Bristol-Myers Squibb, where he was Vice President of Process R&D. His areas of expertise include all aspects of process development, technology transfer, validation, regulatory compliance, new product registration worldwide, external manufacturing and partnership development. He has demonstrated scientific leadership in applying automation and modeling to process development. In charge of envisioning and designing a Pilot Plant which remains the only paperless, fully automated installation of its kind. Futran led the process development, scale-up, plant design or retrofit and validation of numerous commercial products. As a consultant Futran works with pharmaceutical companies in technical issues, with legal firms in Intellectual Property cases, and with software developers seeking to improve modeling and project management for the pharmaceutical industry. Futran has Chemical Engineering degrees from Rice University and Princeton University, where he obtained his PhD under the direction of Prof. Carol Hall.

Eric Toone is the Deputy Director for Technology for the Advanced Research Projects Agency – Energy (ARPA-E), responsible for oversight of all ARPA-E Technology and directs the ARPA-E's Electrofuels program. In addition to his role at ARPA-E, Toone is currently the Anne T. and Robert M. Bass Professor of Chemistry and Professor of Biochemistry at Duke University. Toone is a scientific founder of two venture-backed companies: Aerie Pharmaceuticals, a research-based ophthalmology company, and Vindica Pharmaceuticals, a nitric oxide delivery company. He has served as a permanent member of the Bioorganic and Natural Products Study Section at the National Institutes of Health, and is currently a member of the NSERC Organic & Inorganic Review panel (Canada). Toone has authored over 100 scientific papers and over 30 patents. He is an associate editor of the journal Biopolymers and the editor in chief of the monograph series Advances in Enzymology. He studied chemistry as an undergraduate at the University of Guelph, graduating in 1983. That same year he moved to the University of Toronto to begin graduate studies with Professor J. Bryan Jones. Toone graduated from the University of Toronto in 1988 and moved to Harvard University to continue his studies with Professor George Whitesides.

Treena Arinzeh received her BS from Rutgers University in Mechanical Engineering, her MSE in Biomedical Engineering from Johns Hopkins University, and her PhD in Bioengineering from the University of Pennsylvania. She worked for several years as a project manager at a stem cell technology company, Osiris Therapeutics, Inc. Arinzeh joined the faculty of the New Jersey Institute of Technology (NJIT) in 2001 as one of the founding faculty members of the department of Biomedical Engineering. Arinzeh has been recognized with numerous awards, including the National Science Foundation CAREER Award in 2003, Presidential Early Career Award for Scientists and Engineers (PECASE) in 2004, Outstanding Scientist Award from the NJ Association for Biomedical Research in 2004, People to Watch in 2005 in The Star Ledger and the Coulter Foundation Translational Award in 2010. Her research support is from the National Science Foundation, Coulter Foundation, Musculoskeletal Transplant Foundation, New Jersey Commission on Science and Technology, New Jersey Commission on Spinal Cord Repair and medical device/biotechnology companies.

Scott Banta is Associate Professor of Chemical Engineering at Columbia University. His research focuses on applying protein engineering and metabolic engineering tools to solve a variety of important problems in bioengineering. Banta received his PhD from Rutgers University in 2002. He was awarded the James D. Watson Investigator Program Award from the New York State Office of Science, Technology and Academic Research (NYSTAR) in 2005.

Rohit Ramachandran is Assistant Professor of Chemical & Biochemical Engineering at Rutgers University. Ramachandran received his PhD in Chemical Engineering from Imperial College London in 2008. His research interests span the areas of modeling, simulation, experimental validation, optimization and control of chemical and pharmaceutical processes.

Dan Steingart is an assistant professor in the department of chemical engineering at the City College of New York, and a founding faculty member of the CUNY Energy Institute. He has developed printing processes for electrochemical energy storage, distributed sensors for large scale electrochemical processes, and power conversion circuitry for wireless sensor nodes in both academic and industrial laboratories. As a co-founder of Wireless Industrial Technologies (WIT) he spent considerable time probing conductors carrying over 50 kA in commercial electrowinning plants while trying to remember what not to touch or breathe on.

Raymond S. Tu is an Assistant Professor in Chemical Engineering at The City College of The City University of New York. He received his BS in Chemical Engineering from The University of Florida, and his PhD in chemical engineering from the University of California–Santa Barbara in 2004. At Santa Barbara, he studied with Matthew Tirrell examining the design and self-assembly of peptide functionalized molecular architectures. He completed a post-doctoral fellowship in 2005 at Georgia Institute of Technology investigating rheological properties of biologically functionalized polymer-based materials. The focus of his research program at CUNY is the synthesis of surface-active molecular building blocks, which are derived from the combination of elements that direct interfacial assembly with components responsible for selective binding. This methodology is proving to be an effective tool for engineering complex composite materials that contain structures with multiple length-scales. The research in his group has been supported by AFOSR, NSF, NSF-PREM, DOE and industry.

Craig Hardgrove is a postdoctoral research associate at Stony Brook University. He has a PhD in geology and is a researcher in planetary science. Specifically, he studies the thermal infrared properties of sedimentary materials that are analogous to those found on Mars. He was made a collaborator on Mars Science Laboratory for his contributions to the neutron detector instrument on the rover, which is capable of identifying water. Hardgrove is the founder of Astrum Terra, a group of professional scientists who are avid video gamers who want to help incorporate scientific concepts into gaming. He is interested in using video games as educational tools and for communicating scientific concepts and is also interested in improving his own ability to explain scientific concepts clearly.