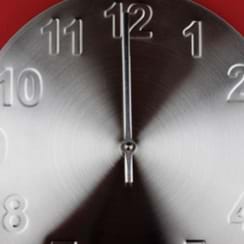 Ever since the first life forms developed, evolution has confronted the problem of timing: when should the organism eat, when should it reproduce, when should it rest? Across a span of nearly four billion years, our ancestors evolved to rise at dawn, sleep at dusk, feast in fall and fast in the winter.

That ancient schedule is still programmed into our genes, and we ignore it at our peril. Indeed, a growing body of evidence shows that the modern habits of waking to an alarm clock, sleeping after the "Tonight Show", and feasting all year round are largely responsible for some of the worst health problems of modern humans. The Academy's Diabetes and Obesity Discussion Group met on February 9, 2010 to discuss this interaction, in a meeting that featured presentations and a lively panel discussion by four leading researchers in the field.

Automated Morningness-Eveningness Questionnaire
This questionnaire was developed by Michael Terman and others at the Center for Environmental Therapeutics.

Joseph Bass is an associate professor in the Department of Medicine, Division of Molecular Medicine and Endocrinology, at the Northwestern University Feinberg School of Medicine, and in the Department of Neurobiology and Physiology. The major research focus of his group is on the molecular integration of circuits coordinating feeding, sleep, and wakefulness with systems controlling energy balance and nutrient utilization. This work stems from recent discoveries on the role of the circadian clock gene network in the integration of both brain and peripheral tissue energy sensing and metabolism. The Bass lab exploits approaches ranging from cell biology, to whole animal physiology, experimental genetics and behavioral analyses in order to elucidate the pathophysiology of diabetes, obesity, and metabolic syndrome in states of circadian and sleep disruption, and the reciprocal interplay between metabolic disease states and circadian disorders.

After starting her own lab at the University of Virginia in 1997, she continued to use that model system to study molecular mechanisms of retinal clock function, developing tools to perturb clock function molecularly in transgenic Xenopus. She also continued her studies on the Nocturnin gene and demonstrated that this gene encodes a deadenylase—a polyA-specific ribonuclease that removes the polyA tails from mRNAs. More recently, her lab has begun to focus on mammalian model systems and, in addition to a continued focus on Nocturnin and its role in clock control of metabolism, also works on the role of the Cryptochrome proteins in the central circadian mechanism.

In September of 2009, she moved to the University of Texas Southwestern Medical Center to join the Department of Neuroscience. Carla Green is a fellow of the American Association for the Advancement of Science.

Robert Levitan is an expert on atypical subtypes of mood disorders characterized by depressed mood and increased eating behavior, including atypical depression, seasonal affective disorder, and eating disorders such as binge eating disorder and bulimia nervosa. In many cases, these various disorders co-exist in the same individual, suggesting that one or more vulnerability factors are shared among them. Levitan integrates clinical research in adults with developmental research focused on the early origins of disease. This includes both genetic association studies and novel methodologies emerging from the rapidly evolving field of socio-biology, which focuses on the interplay of nature and nurture. A better understanding of the complexity inherent in these disorders will lead to new prevention strategies and treatment approaches.

Levitan is a senior clinical investigator in the mood disorders clinic at the Centre for Addiction and Mental Health, Toronto and is a full professor in the Department of Psychiatry at the University of Toronto. Levitan is also the immediate past-president of the Society for Light Treatment and Biological Rhythms (SLTBR).

Pere Puigserver received his PhD in biochemistry from the University of Illes Balears, Spain, in 1992. He did postdoctoral research with Bruce Spiegelman at DFCI before joining the faculty as an assistant professor of cell biology at Johns Hopkins University School of Medicine in 2002. In 2006, Puigserver rejoined the faculty of Harvard Medical School and DFCI to continue his research on the genetic and biochemical mechanisms underlying the control of intermediary metabolism by nutrients and hormonal signals in mammals. In 2008 Puigserver was promoted to associate professor of cell biology at Harvard Medical School and Dana-Farber Cancer Institute.

Michael Terman is professor of clinical psychology in Psychiatry at Columbia University, research scientist VI at the New York State Psychiatric Institute, director of the Center for Light Treatment and Biological Rhythms at New York-Presbyterian Hospital / Columbia University Medical Center (www.columbia-chronotherapy.org), and president of the Center for Environmental Therapeutics () an independent 501(c)(3) nonprofit consortium of mental health clinicians and chronobiologists. His animal research has focused on circadian rhythmicity in visual sensory and retinal function, circadian entrainment by feeding schedules, and the zeitgeber properties of naturalistic dawn-dusk transitions. His clinical research has led to the development of 10,000 lux light therapy, dawn simulation therapy, and negative air ionization therapy for depressive disorders. He is a co-author of the first treatment manual in the field, "Chronotherapeutics for Affective Disorders" (Karger, 2009).