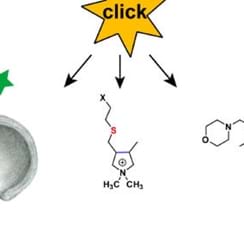 Click chemistry is a new approach to synthetic organic chemistry that uses simple chemical building blocks and mild aqueous conditions to produce high-specificity ligands and labeling molecules for the investigation of biological systems. These reactions mimic those found in nature for building large complex molecules such as proteins, DNA, and RNA. Since its inception by K. Barry Sharpless, click chemistry has yielded several novel reactions that have been used to produce experimental tools and therapeutic agents, some of which are now in preclinical testing. The products of these reactions are particularly useful for investigating difficult-to-synthesize biological products such as glycans, and challenging, highly transient signaling activities such as those depending on redox reactions. On September 15, 2014, pioneers and young investigators in the field presented their recent work, providing a glimpse into the expanding possibilities of this synthetic methodology. The symposium, Click Chemistry in Biology and Medicine: New Developments and Strategies, was presented by the Academy's Chemical Biology Discussion Group.

The Chemical Biology Discussion Group is proudly supported by

Peng Wu is an associate professor in the Department of Biochemistry and the director of the newly established Chemical Biology Core Facility at the Albert Einstein College of Medicine. He received his PhD from Scripps Research Institute in 2005 under the guidance of K. Barry Sharpless. He also spent time as a visiting student in the laboratory of Professor Craig J. Hawker at IBM Almaden Research Center and at the University of California, Santa Barbara. Wu was a postdoctoral fellow in the group of Dr. Carolyn R. Bertozzi at the University of California, Berkeley. Since joining the Albert Einstein College of Medicine in 2008, Wu has focused on developing a research program at the interface of chemistry and biology, particularly the invention of new tools for studying protein glycosylation related to human disease.

Jennifer Henry is the former director of Life Sciences at the New York Academy of Sciences. Before joining the Academy, she was a publishing manager in the Academic Journals division at Nature Publishing Group. She also served for eight years as editor of Functional Plant Biology for CSIRO Publishing in Australia. She received her PhD in plant molecular biology from the University of Melbourne, specializing in the genetic engineering of transgenic crops. As director of Life Sciences, she developed scientific symposia across a range of life sciences, including biochemical pharmacology, neuroscience, systems biology, genome integrity, infectious diseases and microbiology. She also generated alliances with organizations interested in developing programmatic content.

James C. Paulson obtained his PhD in biochemistry from the University of Illinois at Champaign–Urbana and did postdoctoral work at Duke University Medical Center. From 1978 to 1990 he was a member of the faculty in the Department of Biological Chemistry at the UCLA School of Medicine, where he developed an interest in analyzing the receptor specificity of influenza viruses from different host species. From 1990 to 1999 he served as vice president and a member of the Board of Directors at Cytel Corporation. Since 1999 he has been a professor at Scripps Research Institute, where he is chair of the Department of Cell and Molecular Biology with joint appointments in the Department of Chemical Physiology and the Department of Immunology and Microbial Sciences. His current research interests include the roles of glycan binding proteins in the modulation of immune cell signaling and the receptor specificity of mammalian and animal influenza viruses.

K. Barry Sharpless holds a PhD in organic chemistry from Stanford University and completed postdoctoral studies with Dr. J. P. Collman, also at Stanford, and with Dr. Konrad Bloch at Harvard University. Sharpless set up his own laboratory in 1970 at Massachusetts Institute of Technology. Except for several years in the 1970s when he was a member of Stanford's chemistry faculty, Sharpless remained at MIT until moving to Scripps Research Institute in 1990. At Scripps he is W. M. Keck Professor of Chemistry and a member of the Skaggs Institute for Chemical Biology. In 2011 Thomson Reuters named him fourth on the list of top 100 chemists whose papers published in the first decade of the 21st century achieved the highest citation impact scores. In 2001 Sharpless shared the Nobel Prize in Chemistry for his work on chirally catalyzed oxidation reactions (Sharpless epoxidation, Sharpless asymmetric dihydroxylation, Sharpless oxyamination). The other half of the prize was shared by Drs. William S. Knowles and Ryōji Noyori for their work on stereoselective hydrogenation.

Yimon Aye received her PhD in organic chemistry from Harvard University in 2009 under the guidance of Dr. David Evans. As a Damon Runyon cancer research postdoctoral fellow, she received training in mechanistic biology at Massachusetts Institute of Technology, mentored by Dr. JoAnne Stubbe. She is now the Milstein Junior Faculty Fellow and an assistant professor in the Department of Chemistry and Chemical Biology at Cornell University with a secondary appointment in the Department of Biochemistry at Weill Cornell Medical College. Aye established her laboratory at Cornell University in July 2012 and was recently recognized by the National Science Foundation CAREER and Beckman Young Investigator Awards.

David A. Spiegel is an associate professor at Yale University with appointments in the Departments of Chemistry and Pharmacology. He pursued a combined MD/PhD degree at Yale University, where he focused on synthetic organic chemistry, graduating in 2005. After postdoctoral studies at the Broad Institute of Harvard and MIT, Spiegel started his independent academic career at Yale University in 2007. His research group works on synthetic immunology, which involves the development of novel synthetic systems for modulating and manipulating immune function. Specific disease areas of interest include prostate cancer, HIV, Gram-positive bacteria, and aging. Spiegel has received awards including the NIH Director's New Innovator Award, the Department of Defense Era of Hope Scholar Award, the Ellison Medical Foundation New Scholar Award in Aging Research, the Novartis Early Career Award in Organic Chemistry, the Bill and Melinda Gates Foundation Grand Challenges Explorations Award, and the Alfred P. Sloan Foundation Fellowship.

Mingxuan Wu received his BS in biotechnology and MS in microbiology from Shanghai Jiao Tong University, China. Under the direction of Professor Huchen Zhou in the School of Pharmacy, he synthesized sugar nucleotides to study antibiotic glycosylation and diterpenoid probes to elucidate the mechanism of leukemia cell differentiation. In 2010, he joined the Fiedler lab in the Department of Chemistry at Princeton University to study diphosphoinositol polyphosphate signaling by non-hydrolyzable analogs and affinity reagents.

The Chemical Biology Discussion Group is proudly supported by