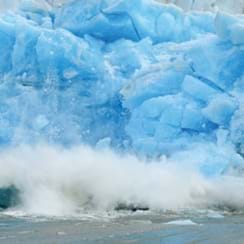 Climate Change: What We Know and What We Can Do

On January 29, 2008, the New York Academy of Sciences hosted an all-day meeting on global warming featuring talks from ten experts. The meeting was divided into two sections. The morning's talks presented evidence of climate change and its likely future impacts on land, oceans, people and ecosystems. The afternoon's speakers focused on adaptation and mitigation strategies.

Worldwide, land-based glaciers are retreating at a dramatic pace, and this meltwater adds to sea level rise. In addition, the edges of the Earth's major ice sheets in the Arctic and Antarctic are melting. How quickly this additional water will increase sea levels is unknown.

Most of the world's people live in coastal areas and are vulnerable to inundation from sea level rise—cities on river deltas are especially at risk. Possible ways to adapt include investing in clean energy solutions, managing our growth, and adopting a carbon tax or an emissions trading program.

Carbon Tax Center
This advocacy organization works to disseminate information about carbon taxation and to promote it as a strategy to reign in man-made climate change. Visit their links page for many more resources.

Intergovernmental Panel on Climate Change
The IPCC shared the 2007 Nobel Peace Prize for its efforts to build up and disseminate greater knowledge about man-made climate change. Click here to read the IPCC's reports on the scientific basis for climate change; on impacts, adaptation, and vulnerability; on mitigating climate change; and the AR4 summary report.

The Institute for Sustainable Cities, City University of New York
This CUNY institute conducts research on climate change and energy use, consumption of resources, and the sustainable of cities by the coast, and serves as a knowledge network for students and educators. Keep up to date with sustainability issues in New York City and beyond on the Sustainable Cities Blog.

PlaNYC
Among the goals of New York City's program for making itself more sustainable is to reduce its greenhouse emissions by more than 30%.

Smart Growth America
A coalition of national, state and local organizations working to improve the ways we plan and build towns, cities, and metropolitan areas. See their resources page for reports concerning sprawl, planning, and development.

United Nations Framework Convention on Climate Change
The UN program responsible for the 2007 Bali Roadmap and the 1997 Kyoto Protocol.

United Nations Commission on Sustainable Development
The CSD meets annually to focus on cross-cutting issues related to raising standards of life in the developing world in a globally sustainable manner. One recent focus is climate change.

U.S. Global Change Research Program
A federal program that supports research on the interactions of natural and human-induced changes in the global environment and their implications for society.

World Business Council for Sustainable Development
The Council brings together some 180 international companies that share a commitment to sustainable development through economic growth, ecological balance, and social progress. Its Energy and Climate Project is a major focus.

Gore A. 2006. An Inconvenient Truth: The Planetary Emergency of Global Warming and What We Can Do about It. Bloomsbury, New York.

Michael Oppenheimer is the Albert G. Milbank Professor of Geosciences and International Affairs in the Woodrow Wilson School and the Department of Geosciences at Princeton University. He is also Director of the Program in Science, Technology and Environmental Policy (STEP) at the Woodrow Wilson School and Faculty Associate of the Atmospheric and Ocean Sciences Program, Princeton Environmental Institute, and the Princeton Institute for International and Regional Studies. He joined the Princeton faculty after more than two decades with Environmental Defense, a non-governmental, environmental organization, where he served as chief scientist and manager of the Climate and Air Program.

Oppenheimer is a long-time participant in the Intergovernmental Panel on Climate Change (IPCC), which won the Nobel Peace Prize in 2007, and was a lead author of the IPCC's Fourth Assessment Report. He is currently a member of the National Academy of Sciences' Panel on Alternative Liquid Transportation Fuels. He is also a science advisor to Environmental Defense.

Paul Falkowski is a professor of biochemistry and biophysics, and physiological adaptation at the Rutgers University Institute of Marine and Coastal Sciences. He is also director of the Rutgers Energy Institute. His research focuses on topics including biogeochemical cycles, photosynthesis, biological oceanography, molecular biology, biochemistry and biophysics, physiological adaptation, plant physiology, evolution, mathematical modeling, and symbiosis. Before joining Rutgers, Falkowski was head of the Environmental Biophysics and Molecular Biology Program at Brookhaven National Laboratory, and holds adjunct or visiting researcher positions at the Israel Oceanographic and Limnological Research Institute; the State University of New York, Stony Brook; and the CNRS Laboratoire de physique et chimie marines, in Villefranche-sur-Mer, France.

William Schlesinger is president of the Cary Institute of Ecosystem Studies. He previously served as the James B. Duke Professor of Biogeochemistry and Dean of the Nicholas School of the Environment and Earth Sciences at Duke University. A graduate of Dartmouth College and Cornell University, he has been investigating the link between environmental chemistry and global climate change for over 30 years. His recent work focuses on understanding how trees and soil influence atmospheric carbon dioxide levels.

Schlesinger's distinctions include elected membership in both the National Academy of Sciences and the American Academy of Arts and Sciences. He is also a past president of the Ecological Society of America and an Aldo Leopold Leadership Fellow. He has testified before U.S. House and Senate Committees on a range of environmental issues, including desert habitat preservation, global climate change, and, most recently, carbon sequestration. Currently, he serves on the boards of The Doris Duke Charitable Foundation, the Southern Environmental Law Center, and Terrapass LLC.

William Solecki is chair of the Department of Geography at Hunter College of the City University of New York and acting director of the CUNY Institute for Sustainable Cities. He was a contributor to the IPCC Working Group Report II, writing on the implications of industry, settlement, and society in climate change. His work focuses on urban environmental change and management, land use/land coverage, hazards assessment and management, and GIS applications. Solecki completed his PhD at Rutgers University and held positions at Florida State University and Montclair State University before joining Hunter College.

Stephen Leatherman is chair professor and director of the International Hurricane Research Center and director of the Laboratory for Coastal Research at Florida International University. He is an expert in storm impacts on coastal areas, having served for many years on the National Academy of Science Post-Storm Disaster Field Team that was dispatched from Washington, DC to survey hurricane damage. He has published widely and has provided expert testimony to the U.S. Senate and House of Representatives committees on important science policy issues, especially coastal storm impacts and federal response. He has also given hundreds of invited talks at professional conferences and public workshops, and his research has been reported on television programs and in newspapers.

George Hendrey is Distinguished Professor of Earth and Environmental Science at Queens College. With academic training in both engineering and ecology he has worked to apply concepts from engineering to research on issues related to ecological change. His current research interests are in responses of photosynthesis to non-steady state environmental conditions, potential benefits and applications of green roofs, and methods for studying urban watersheds. After serving in the Peace Corps and working at Boeing as an engineer–chemist, Hendrey completed his PhD at the University of Michigan, and worked for many years as a senior ecologist at Brookhaven National Laboratory.

Distinguished Professor of civil engineering at City College of New York, Robert Paaswell has been involved in transportation operations, management, and planning since the late 1960s, when he helped design and implement the Model Cities transportation program for Buffalo, New York. While professor of civil engineering at SUNY Buffalo, he organized and directed the Center for Transportation Studies and Research. From 1980–1982, he chaired the Urban Planning Department at SUNY Buffalo. He has also directed the Urban Transportation Center at the University of Illinois was and served as executive director of the Chicago Transit Authority.

Michael Bobker is an energy engineer and a senior fellow at the CUNY Institute for Urban Systems. In partnership with City Institute for Urban Systems and the CUNY Graduate Center, Bobker is coordinating the CUNY Sustainable Building Initiative. He is also working to help CUNY establish a Building Performance Lab, which will study and practice methods for improving building energy performance. He has spent over 25 years working in NYC buildings and energy management organizations, and has experience in building equipment evaluation, energy analysis, engineering and construction management, technology application, and technician training.

Robert Bell is a professor of management and chair of the Economics Department at Brooklyn College. He has recently published a new book titled The Green Bubble: Waste into Wealth, the New Energy Revolution, and has authored seven previous books, including Beursbedrog (The Stock Market Sting), Les Pâchés capitaux de la haute technologie (The Capital Sins of High Technology), and Impure Science, 1992. He completed a PhD in cybernetics in 1972 at Brunel University, and lives in New York and Paris.

Charles Komanoff is an energy-policy analyst, transport economist, and environmental activist based in New York City. He is director of the consulting firm Komanoff Energy Associates, a founding trustee of the Tri-State Transportation Campaign, director of the Bridge Tolls Advocacy Project, and coordinator of the pedestrian-rights organization Right Of Way. In earlier work, he "refounded" NYC's bike-advocacy group Transportation Alternatives in the 1980s, and wrote or edited the landmark reports Subsidies for Traffic, The Bicycle Blueprint, and Killed By Automobile. Earlier, Komanoff described the economics of nuclear power as author-researcher and expert witness for states and municipalities across the United States. A Harvard University graduate in math and economics, Komanoff lives with his wife and two sons in lower Manhattan.

Jill Pope is a science writer and editor who lives in Brooklyn, NY.