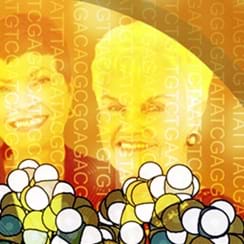 The availability of DNA sequence information, combined with high-throughput functional genomics technologies like microarrays, allows reasearchers to simultaneously monitor the expression of thousands of genes as RNA. The abundance of various RNA transcripts specifies the proteins and non-coding RNAs that define different cells and tissues. In the past few years, researchers have recognized that gene expression is itself a rich, quantitative phenotype that they can analyze using genetic tools. Such "genetical genomics," also known as "genetics of gene expression," was the subject of a March 1, 2006, symposium sponsored by the Systems Biology Discussion Group. Three speakers described how turning the genetics onto itself leads to new insights into how expression is regulated, the complex genetic networks that underlie disease, and potential targets for treatment.

Genetics Embraces Expression
A 2005 "Hot Papers" story from The Scientist by David Secko on genetical genomics.

Vivian Cheung is an associate professor of pediatrics at the University of Pennsylvania School of Medicine. She is affiliated with graduate study groups in cell and molecular biology, and genomics and computational biology. In the lab she directs, she and her associates study the genetic basis of human phenotypes and traits using genome-wide approaches. Her projects include study of the genetics of gene expression and of genetic radiosensitivity in humans, and she has developed an original type of genetic mapping called direct IBD mapping. Cheung earned her MD at Tufts University

T. Conrad Gilliam is professor and chair of the Department of Human Genetics at the University of Chicago. Gilliam has led international studies to map disease loci for all three forms of spinal muscular atrophy and an X-liked form of parkinsonism and to identify and characterize disease genes for Wilson disease, two forms of epilepsy, and retinitis pigmentosa. He currently investigates the genetic basis of common heritable disorders including: schizophrenia, autism, anxiety disorder, bipolar disorder, Alzheimer's disease and cardiovascular disease. Gilliam received his undergraduate and graduate degrees in biochemistry from Clemson University and the University of Missouri. He did his post-doctoral training at the University of London and Harvard University mapping the genetic loci for cystic fibrosis and Huntington's disease. In 1987 he was recruited to Columbia University where he was the John E. Born Professor of Genetics and Development and director of the Columbia Genome Center until 2004.

Eric Schadt joined Rosetta in November 1999 where he founded bioinformatics and computational genomics groups to mine large scale sets of data aimed at experimentally annotating the human genome. After Rosetta was acquired by Merck, Schadt formed a genetics department within the Molecular Profiling Department at Merck, in which the primary mission is elucidating common human diseases and drug response using novel integrative genomics approaches based on genetic and molecular profiling data. His research has helped define a new field in statistical genetics—the genetics of gene expression, and has led to a number of discoveries relating to the causes of common human diseases. Schadt also holds an affiliate professor position in the departments of Biostatistics and Pathology at the University of Washington in Seattle. Prior to joining Rosetta/Merck, Schadt was a senior research scientist at Roche Bioscience. He received his BS in applied mathematics/computer science from California Polytechnic State University, his MA in pure mathematics from UCD, and his PhD in bio-mathematics from UCLA (requiring PhD candidacy in molecular biology and mathematics).

Don Monroe is a science writer based in Murray Hill, New Jersey. After getting a PhD in physics from MIT, he spent more than fifteen years doing research in physics and electronics technology at Bell Labs. He writes on biology, physics, and technology.