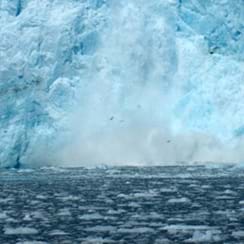 On February 27, 2007, the New York Academy of Sciences hosted an event to honor the launch of a scientific report titled Confronting Climate Change: Avoiding the Unmanageable, Managing the Unavoidable. The report was written by an expert panel organized by Sigma Xi, the scientific honor society, and sponsored by the UN Foundation.

The authors concluded that allowing the global average surface temperature to rise more than 2°C to 2.5°C over the next 100 years would sharply increase the risk of catastrophic events. Greenhouse gases now in the atmosphere have already committed the planet to a rise of about 1.5°C. Climate change will lead to major crop failures, more extreme weather events, and make environmental refugees of tens of millions.

They asserted that responding to climate change requires intelligent policymaking and sustained investment in appropriate technology, both of which could help avert disasters resulting from climate change while simultaneously boosting living standards worldwide.

This conference and eBriefing were made possible with support from:

Confronting Climate Change: Avoiding the Unmanageable and Managing the Unavoidable
The complete Sigma Xi–UN Foundation report, as well as a 12-page executive summary, are available for download on the Web site of the UN Foundation.

The Climate Group
This independent nonprofit works to advance business and government leadership on climate change. Based in the UK, the United States, and Australia, it operates internationally.

The Earth Institute at Columbia University
Directed by Jeffrey D. Sachs, the Institute draws from talent throughout Columbia University to address complex issues facing the planet, including sustainable development and the needs of the poor. Toward solving real-world problems, the institute supports pioneering projects in the biological, engineering, social, and health sciences, and it promotes interdisciplinary projects. Visit the Global Roundtable on Climate Change and these pages on Climate and Society for more information.

National Academies of Science
The National Academies have established a Science and Technology for Sustainability Program to encourage the use of science and technology to achieve long-term sustainable development. Its Marian Koshland Science Museum Web site offers a primer on climate change.

The Sky Is Falling (PDF, 529 KB)
An interview with John Holdren in the Bulletin of the Atomic Scientists.

Stop Global Warming
A citizens-based "virtual march" to "use our collective voices to demand that governments, corporations, and politicians take the steps necessary to stop global warming."

The United Nations Foundation
The UN Foundation builds and implements public-private partnerships to address the world's most pressing problems, with particular emphasis on areas such as children's health; women and population; and peace, security, and human rights. Their program page on the environment features a link to a podcast with Richard Moss, who discusses the 2007 IPCC Working Group I report.

United Nations Framework Convention on Climate Change
Among other resources, this Web site provides full text of the Kyoto Protocol and discussion of its implementation.

United Nations Commission on Sustainable Development
The CSD meets annually to focus on cross-cutting issues related to raising standards of life in the developing world in a globally sustainable manner. One focus of the Current Cycle is climate change.

U.S. Global Change Research Program
A federal program that supports research on the interactions of natural and human-induced changes in the global environment and their implications for society.

World Business Council for Sustainable Development
The Council brings together some 180 international companies that share a commitment to sustainable development through economic growth, ecological balance, and social progress. Its Energy and Climate Project is a major focus.

Peter Raven is vice chair of the United Nations–Sigma Xi Scientific Expert Group and a coordinating lead author of its report on climate change. He is director of the Missouri Botanical Garden and Engelmann Professor of Botany at Washington University in St. Louis.

Raven served for a decade as Home Secretary of the U.S. National Academy of Sciences, and has been very actively involved with the activities of the Academy and its operating arm, the National Research Council. He was also is a member of President Clinton's Committee of Advisors on Science and Technology, and was chairman of the National Geographic Society's Committee for Research and Exploration. Raven served as the first chair of the U.S. Civilian Research and Development Foundation, a government-established organization that funds joint research with the independent countries of the former Soviet Union. He is active internationally in science, science policy, and particularly conservation, where he has emphasized the need for a transition to global sustainability in forums held throughout the world.

Among his numerous awards and honors, Dr. Raven is the recipient the prestigious Environment Prize of the Institut de la Vie, the Volvo Prize, the Tyler Prize, and the Sasakawa Environment Prize. He has also held Fellowships with the Guggenheim Foundation and the John D. and Catherine T. MacArthur Foundation. In his research, Raven has worked as coeditor of a joint Chinese-American international project that is leading to a contemporary account of all the plants of China. He is also coauthor of the textbooks The Biology of Plants and Environment.

John Holdren is director of the Woods Hole Research Center. He also holds appointments at Harvard University's John F. Kennedy School of Government as Teresa and John Heinz Professor of Environmental Policy, and director of its Program in Science, Technology, and Public Policy. He is also also a coordinating lead author of the United Nations–Sigma Xi Expert Group on Climate Change. In 2006 he served as president of the American Association for the Advancement of Sciences, and in 2007 he became chairman of its board of governors.

A physicist by training, Holdren's work has focused on causes and consequences of global environmental change, analysis of energy technologies and policies, ways to reduce the dangers from nuclear weapons and materials, and the interaction of content and process in science and technology policy. After early career work in reentry aerodynamics and plasma and fusion research, he spent over 20 years in the Department of Energy and Resources at the University of California, Berkeley. He has authored or coauthored some 20 books and book-length reports.

Holdren has been recognized as a Fellow of the American Academy of Arts and Sciences, and as a recipient of a MacArthur Fellowship, the Volvo Environment Prize, the Tyler Prize for Environmental Achievement, and the Heinz Prize in Public Policy, among others. He gave the Nobel Peace Prize acceptance lecture on behalf of the Pugwash Conferences on Science and World Affairs (for which he served as chair of its executive committee), and was a member of President Clinton's Committee of Advisors on Science and Technology.

Rosina Bierbaum is dean of the School of Natural Resources and Environment at the University of Michigan, and vice chair of the United Nations–Sigma Xi Scientific Expert Group and a coordinating lead author of its report on climate change. She is also a trustee of the University Corporation for Atmospheric Research (UCAR) and a board member for the American Association for the Advancement of Science (AAAS), the Federation of American Scientists, the Energy Foundation, and the Environmental and Energy Study Institute.

In addition, Bierbaum is a member of the International Advisory Board for the journal Frontiers in Ecology and the Environment; the National Research Council's Board on Atmospheric Sciences and Climate; the Design Committee for the Heinz Center's "The State of the Nation's Ecosystems" project; the Selection Committee for the Tyler Prize; the Aldo Leopold Leadership Program advisory committee, and the advisory board for the National Ecological Observatory Network (NEON).

Bierbaum has been honored with the Waldo E. Smith Medal of the American Geophysical Union, the Climate Protection Award from the U.S. Environmental Protection Agency, and as a AAAS Fellow.

From 2000 to 2006, Moss directed the interagency U.S. Climate Change Science Program Office, which was established to coordinate President George W. Bush's Climate Change Research Initiative. He holds an appointment as staff scientist of the Joint Global Change Research Institute, based at the University of Maryland. He also serves on the editorial board of Climatic Change. His research interests include quantitative modeling of the sensitivity and adaptability of socioeconomic systems to environmental variability and change, and evaluation and communication of scientific uncertainty in assessments.

Earlier in his career, Moss worked with the IPCC, editing and authoring several reports. He also served as the deputy executive director of the Human Dimensions of Global Environmental Change Programme (HDP) and program officer of the International Geosphere-Biosphere Programme (IGBP) in Stockholm, Sweden, focusing on land use/cover change. Moss served on the National Research Council Panel on Assessment of NASA's Post-2002 Earth Observing Missions in 1999, and was a member of the editorial board of Annual Review of Energy and the Environment from 1994–1999.

Michael MacCracken is chief scientist for climate change programs with the Climate Institute in Washington, DC, and a member of the United Nations–Sigma Xi Scientific Expert Group on Climate Change. His activities focus on improving understanding of climate change and its impacts and conducting outreach efforts to improve public understanding of climate change. MacCracken is also president of the International Association of Meteorology and Atmospheric Sciences (IAMAS) for the period 2003–2007, and serves on the executive committees of the International Union of Geodesy and Geophysics and the Scientific Committee for Oceanic Research (SCOR). In addition, he is the review editor of the chapter on North America for the Fourth Assessment Report of the Intergovernmental Panel on Climate Change (IPCC).

In his research as an atmospheric physicist, MacCracken has conducted numerical modeling of various causes of climate change and of factors affecting air quality. He spent 25 years in the Physics Department of the University of California's Lawrence Livermore National Laboratory (LLNL), where he served as division leader for atmospheric and geophysical sciences from 1987–1993 and as deputy division leader from 1974–1987. In 1993, MacCracken joined the interagency Office of the U.S. Global Change Research Program (USGCRP) in Washington, DC, where he was senior global change scientist and the first executive director. From 1997–2001, he served as executive director of the USGCRP's National Assessment Coordination Office, and as the coordinating author for the chapter dealing with the impacts of climate change that was included in the official U.S. Government's 2002 submission to the UN Framework Convention on Climate Change. During this period with the Office of the USGCRP, MacCracken also coordinated official U.S. Government reviews of assessment reports prepared by the IPCC, and he was a coauthor/contributing author for various chapters in the IPCC assessment reports.