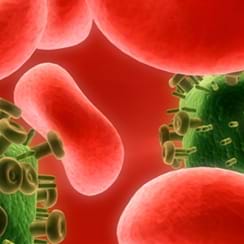 Cracking the Safe: Advances in HIV / AIDS Prevention and Treatment

This one-day symposium, Cracking the Safe: Advances in HIV / AIDS Prevention and Treatment,  held at the Academy on May 16, 2011 covered a range of issues facing researchers working towards the development of an HIV/AIDS vaccine. This eBriefing provides an update on current challenges and solutions. Among the topics covered by the speakers are the epidemiological challenges of vaccine development, advances and setbacks in HIV virology and immunology including ex vivo and in vivo imaging of viruses crossing the mucosal barrier, the latest in the search for HIV vaccines, HIV microbicides and PreP (including results from international trials) and an update on HIV-reactivating factor.

Editor's note:
Extremely promising results of the HPTN052 randomized clinical trial of anti-retroviral therapy as a pre-exposure prophylaxis, a study directed by Myron Cohen, have recently been featured in the New York Times. Click here to read more about the study in the National Institutes of Health press release.

Yegor Voronin is a Science Officer at the Global HIV Vaccine Enterprise (the Enterprise). In this role, he is responsible for identifying, developing, and managing science-related initiatives and activities for the Enterprise. In particular, he oversees the development of 2010 Scientific Strategic Plan. Prior to joining the Enterprise, Voronin completed his postdoctoral training with Michael Emerman and Julie Overbaugh at the Fred Hutchinson Cancer Research Center (FHCRC) in Seattle, Washington. Over the last ten years he studied HIV and other retroviruses on a variety of levels, from their potential use as gene therapy vectors at the West Virginia University, to molecular mechanisms of reverse transcription at the National Cancer Institute, to HIV and SIV evolution and population genetics at the FHCRC.

Voronin holds a master's degree in Molecular Biology from the Novosibirsk State University in Russia and a PhD in Biochemistry from the West Virginia University.

Michael Watson Leads the Global Immunisation Policy group at Sanofi Pasteur; based in Lyon, France. He leads the Sanofi Pasteur HIV steering committee. Prior to his current role he was Executive Vice President of Research and Development at the Vaccine company Acambis, based in Cambridge, USA and prior to that Head of Clinical and Epidemiology at Sanofi Pasteur MSD. He is a UK-trained physician who led the teams that developed and licensed Pediacel® in the UK and Gardasil® (Quadrivalent 6,11,16,18 HPV vaccine) in Europe and has worked on most classes of vaccines, including Pandemic Influenza vaccines. He is currently chair of the Biotherapeutics and Vaccines Committee of the IFPMA, leads the Pandemic Influenza Preparedness Group of the IFPMA and sits on the Board of the European Vaccines Manufacturers.

Myron S. Cohen is J. Herbert Bate Distinguished Professor of Medicine, Microbiology and Immunology and Public Health at the University of North Carolina at Chapel Hill. He is Associate Vice Chancellor for Medical Affairs–Global Health. Cohen received his BS (magna cum laude) from the University of Illinois, Champaign–Urbana. He received an MD from Rush Medical College. He completed an Infectious Disease Fellowship at Yale University, and he is a Fellow of the American College of Physicians and the Infectious Disease Society of America. Cohen serves as the Director of the UNC Division of Infectious Disease and the UNC Institute for Global Health and Infectious Disease. In addition, Cohen serves on the Leadership Groups of the NIH Center for HIV Vaccine Immunology (CHAVI) and the NIH HIV Prevention Trials Network (HPTN). Cohen serves as an Editor of the journal Sexually Transmitted Diseases and of the comprehensive textbook Sexually Transmitted Diseases. Cohen's research work focuses on the transmission and prevention of transmission of HIV, with emphasis on the role played by STD co-infections. He has conducted landmark studies related to the biology of HIV transmission, and use of antiretroviral agents for prevention. Cohen is the author of more than 500 publications.

David Cook is the Chief Operating Officer of the International AIDS Vaccine Initiative, a global non-profit organization working to ensure the development of preventive HIV vaccines. Cook has more than 20 years of experience in organizational management and operations in the biotechnology industry. Before IAVI, Cook served as a consultant for BIO Ventures for Global Health, a nonprofit that seeks to apply the resources and capabilities of biotech to develop vaccines and drugs for neglected diseases, where he led the development of new business, cross-sector partnerships and incentives for commercial enterprises. Immediately before BVGH, Cook was the CEO and co-founder of Anza Therapeutics, a biotechnology start-up company. Cook has led teams to commercialize several biotech products and is an inventor on more than 20 patents. Cook earned a PhDfrom the University of California, Berkeley and received undergraduate degrees from Harvard College and California State University. He completed the Stanford Executive Program at Stanford Graduate School of Business.

Cecilia Cheng-Mayer received her PhD in Microbiology from Columbia University and post doctoral training in Virology at the University of California San Francisco. She is currently a Staff Investigator and Professor at the Aaron Diamond AIDS Research Center. Her laboratory utilizes nonhuman primate infection models to study the impact of HIV-1 tropism on viral transmission and pathogenesis, and to test prevention modalities against AIDS.

Thomas J. Hope received his PhD from UC Berkeley in Immunology. During his postdoctoral training at UC San Francisco, he began to study the HIV Rev protein. The study of this HIV protein led Tom to begin to utilize the techniques of cell biology. As Tom began to learn more cell biology it became apparent that such approaches were under utilized to study HIV. Therefore, the Hope laboratory developed a series of techniques allow the fluorescent labeling of HIV particles or viral proteins. The Hope laboratory currently utilizes a cell biology approach to study various aspects of HIV from virus entry and assembly, to defining the earliest steps of the sexual transmission of HIV.

COL Jerome H. Kim is currently Deputy Director (Science) and Chief, Department of Molecular Virology and Pathogenesis, Division of Retrovirology, Walter Reed Army Institute of Research (WRAIR) (U.S. Military HIV Research Program), a multidimensional, international research program. He also serves as the HIV Vaccines Project Manager, U.S. Army Medical Material Development Activity, Fort Detrick, MD. Kim's current research interests include HIV molecular epidemiology, host genetics, and HIV vaccine development. Kim is an Associate Professor of Medicine, Uniformed Services University of the Health Sciences and a Clinical Associate Professor of Medicine at the John A. Burns School of Medicine, University of Hawaii. He is a Fellow of the American College of Physicians and a Fellow the Infectious Diseases Society of America. Kim graduated with highest honors in Biology and high honors in History from the University of Hawaii, Manoa in 1980. He graduated from the Yale University School of Medicine in 1984. Kim completed his training in Internal Medicine (1987) and fellowship in Infectious Diseases (1990) at Duke University Medical Center.

Olaf Kutsch is currently an Associate Professor, Division of Infectious Diseases, Department of Medicine at the University of Alabama at Birmingham and the Director of the UAB CFAR Flow Cytometry Core. Kutsch obtained a Diploma in Biology/Biotechnology in 1992, and doctoral degree in Immunology/Virology in 1997 at the University of Wrzburg, Germany. He then became a post-doctoral fellow in the laboratory of Etty Benveniste at the University of Alabama in Birmingham, where he initially worked on AIDS dementia related research. He started to work on HIV-1 latency in 2001. Kutsch's current research interests include HIV-1 latency at the level of molecular biology and drug discovery. He is also involved in drug discovery efforts on other anti-HIV-1 and TB drugs.

Hendrik Streeck completed his medical training at Charite University, Berlin, Germany in 2006 and received his PhD from Friedrich-Wilhelm University, Bonn, Germany in 2007. After his postdoctoral fellowship with Marcus Altfeld he was promoted to Junior Faculty at the Ragon Institute of MGH, MIT and Harvard. Streeck's laboratory focuses on the role and function of HIV-specific CD4 T cells in the context of spontaneously controlled HIV-1 infection and how these responses may be applied to HIV vaccine induced protection.

This program is supported by an educational grant from Gilead Sciences, Inc. This event is funded in part by the Life Technologies™ Foundation.