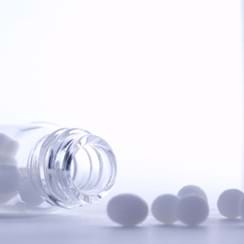 It's no secret that the pharmaceutical industry has a pipeline problem. The enormous high-throughput screening campaigns that pharmaceutical companies are waging yield a steady stream of "hits," or compounds with interesting activities in biochemical assays. A small number of these go on to become "leads," which are active in more complex and biologically relevant systems. The attrition continues in subsequent animal tests, and even into clinical trials. At each stage, failure becomes more expensive.

What the industry needs is a whole new approach, and that was the subject of a meeting on innovative discovery platforms at the Academy. Discovery platforms are tools for the first phase of drug development, which entails reaching into the universe of possible chemical structures and plucking out a useful drug. Compression of the early development time would be enormously helpful, giving companies more time to profit from new products.

David Bearss is the chief scientific officer of SuperGen, Inc., a pharmaceutical company dedicated to the discovery and development of novel cancer therapies. Bearss leads SuperGen's discovery and pre-clinical development strategies and execution as SuperGen continues to accelerate the discovery and advancement into the clinic of novel drug candidates. Bearss is at the core of SuperGen's scientific innovation, and has enabled the discovery of several compounds under development by SuperGen including MP-470 and SGI-1776, which are in early phase clinical trials in cancer patients. Bearss holds a PhD in cell and molecular biology from the University of Texas Health Science Center at San Antonio. He has published more than 30 manuscripts and book chapters and has won several awards for his scientific achievements.

Thomas C.K. Chan is chief scientific officer of ArQule, Inc., a cancer drug discovery and development biotechnology company. Before joining ArQule in 2005, he was vice president of research and development and chief technology officer of MacroChem Corporation, a specialty pharmaceutical company. From 1997 to 2000, he served as senior director of pharmacology and toxicology at EPIX Medical, Inc (now EPIX Pharmaceuticals). Before that, he served as director of therapeutic development at Creative BioMolecules, Inc. (now Curis).

Prior to joining the industry, Chan's academic appointments included service as a director at the Purdue Cancer Center, and he taught as a tenured professor at Purdue/Indiana Universities from 1983 1992. Chan earned a BSc in Biochemistry/Microbiology, and a doctorate in pharmacology from the University of British Columbia Faculty of Medicine. He then completed a fellowship in Hematology/Oncology at the University of California, San Diego Cancer Center. Chan continues to serve as a member of several NIH Study Sections, and he consults on research programs for the Department of Defense.

Richard A. Friesner is a professor in the Department of Chemistry at Columbia University, a position he has held since 1990. He obtained his PhD in 1979 at the University of California, Berkeley, working in the laboratory of Kenneth Sauer. He then spent three years as a postdoctoral fellow working with Robert Silbey at the Massachusetts Institute of Technology. Friesner joined the Chemistry Department at the University of Texas at Austin in 1982 as an assistant professor.

Freisner is the recipient of an Alfred P. Sloan Foundation fellowship, Camille and Henry Dreyfus Teacher–Scholar Award, and an NIH Research Career Development Award. His work is currently focused on computational modeling of complex systems biology and materials sciences. Specific interests include protein structure prediction, structure based drug design, modeling of enzyme reactions, and modeling of nanosystems such as silicon nanoparticles and carbon nanotubes with a particular focus on solar energy applications.

In 1990, Friesner cofounded Schrodinger, Inc., a leading provider of computational chemistry software to the pharmaceutical and biotechnology industries, and he currently serves as the head of its Scientific Advisory Board. Working with scientists in his academic group at Columbia and at Schrodinger, Friesner has led the development of many innovative, widely used software programs for computational chemistry and drug design, including Jaguar (ab initio quantum chemistry), Glide (high throughput docking and scoring), and Prime (high resolution protein structure prediction, modeling of induced fit effects in protein–ligand complexes). In 2008, he was elected as a fellow of the American Academy of Arts and Sciences.

Randall Peterson received his doctorate from Harvard University after studying as a Howard Hughes Medical Institute predoctoral fellow in the laboratory of Stuart L. Schreiber. Following graduation, he completed a postdoctoral fellowship with Mark Fishman at Massachusetts General Hospital. Peterson is currently assistant professor of medicine at Harvard Medical School, associate member of the Broad Institute of MIT and Harvard, and director of the Chemical Biology Program at the MGH Cardiovascular Research Center. Peterson has pioneered the use of zebrafish for small molecule discovery. His current research program is developing applications for in vivo chemical biology in the areas of leukemia, anemia, psychiatric disease, and counterterrorism.