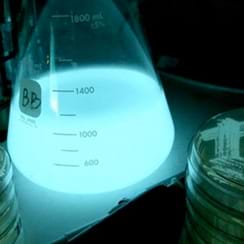 The enigmas of nature and science present vast opportunities for discovering novel therapeutics. The quest for knowledge and solutions leads to unanticipated innovation as disciplines intersect and as researchers converge on particular scientific questions. Thus, the findings from one discipline may benefit another avenue of scientific exploration. A symposium held on the evening of Wednesday, April 4, 2012, Discovering Antibacterial and Anticancer Therapeutics in Unexpected Places, attested to the benefit of these innovative approaches to drug discovery and presented a wide array of intriguing accounts in antimicrobial and anticancer therapy development. Bonnie Bassler and Arturo Casadevall enlightened the audience with their work on quorum sensing in bacteria and on melanin in fungal organisms, respectively.

After detailing what researchers have learned from investigations of bacterial communication, Bassler described how she is exploiting the quorum sensing method bacteria use to coordinate growth. Quorum sensing—one way bacteria identify and count members of their species and of other bacterial species in their surroundings—allows bacterial communities to coordinate the transcription of important, and sometimes pathogenic, factors. By shutting down quorum sensing in the pathogenic Chromobacterium violaceum, Bassler's team was able to increase the survival time of nematodes infected with the bacteria. These results raise the possibility that similar manipulations could influence bacterial propagation in humans, leading to less virulent disease. Arturo Casadevall has been using discoveries from studies of Cryptococcus neoformans to probe promising new cancer treatments. Melanin produced by C. neoformans and deposited in the yeast's cell walls confers resistance to ultraviolet light, heat, enzymatic degradation, heavy metal ions, oxidized free radicals, defensins, and even to anti-fungal agents. By targeting the melanin that protects yeast cells and melanoma tumor cells alike from radiation, researchers may be able to render melanoma more vulnerable to treatment. In fact, in Casadevall's experiments, tumors in mice implanted with human melanoma stopped growing when the mice were treated with radiolabeled antibodies against fungal melanin. Bassler's and Casadevall's results demonstrate the fortuitous application of molecular findings from microbial research to problems of great significance to human health.

Nosanchuk JD, Casadevall A. The contribution of melanin to microbial pathogenesis. Cell Microbiol. 2003;5(4):203-223.

S. Marvin Friedman is Professor Emeritus in the Department of Biological Sciences at Hunter College of CUNY in New York City. His research has focused on the molecular biology of bacterial growth at elevated temperatures. He has published many articles on this subject as well as editing the proceedings of an East–West meeting in Honolulu titled "Biochemistry of Thermophily." He currently writes blogs for the ASM blog site, Small Things Considered.

Jennifer Henry received her PhD in plant molecular biology from the University of Melbourne, Australia, with Paul Taylor at the University of Melbourne and Phil Larkin at CSIRO Plant Industry in Canberra, specializing in the genetic engineering of transgenic crops. She was then appointed as Associate Editor, then Editor, of Functional Plant Biology at CSIRO Publishing. She moved to New York for her appointment as a Publishing Manager in the Academic Journals division at Nature Publishing Group, where she was responsible for the publication of biomedical journals in nephrology, clinical pharmacology, hypertension, dermatology, and oncology. Henry joined the Academy in 2009 as Director of Life Sciences and organizes 35 – 40 seminars each year. She is responsible for developing scientific content in coordination with the various life sciences Discussion Group steering committees, under the auspices of the Academy's Frontiers of Science program. She also generates alliances with outside organizations interested in the programmatic content.

Bonnie Bassler is a member of the National Academy of Sciences and the American Academy of Arts and Sciences. She is a Howard Hughes Medical Institute Investigator and the Squibb Professor of Molecular Biology at Princeton University. Bassler received a BS in Biochemistry from the University of California at Davis, and a PhD in Biochemistry from the Johns Hopkins University. She performed postdoctoral work in Genetics at the Agouron Institute, and she joined the Princeton faculty in 1994. The research in her laboratory focuses on the molecular mechanisms that bacteria use for intercellular communication. This process is called quorum sensing. Bassler's research is paving the way to the development of novel therapies for combating bacteria by disrupting quorum-sensing-mediated communication. Bassler currently chairs Princeton University's Council on Science and Technology which has revamped the science curriculum for humanists. Bassler is a passionate advocate for diversity in the sciences, and she is actively involved in and committed to educating lay people in science. She was awarded a MacArthur Foundation Fellowship in 2002. She was elected to the American Academy of Microbiology in 2002 and made a fellow of the American Association for the Advancement of Science in 2004. Bassler is currently the Chair of the American Academy of Microbiology Board of Governors. President Barak Obama nominated Bassler for membership on the National Science Board, which oversees the NSF and determines the nation's research and educational priorities in science, math, and engineering. She was an editor for a decade for Molecular Microbiology, is currently an editor of mBio, is Chief Editor of Annual Reviews of Genetics, and serves on a number of other editorial boards and in multiple capacities for many scientific organizations.

Arturo Casadevall is the Leo and Julia Forchheimer Professor of Microbiology & Immunology at the Albert Einstein College of Medicine of Yeshiva University. He is Chairman of the Department of Microbiology and Immunology and served as Director of the Division of Infectious Diseases at the Montefiore Medical Center at the Albert Einstein College of Medicine from 2000–2006. Casadevall received both his MD and PhD (biochemistry) degrees from New York University. Subsequently, he completed internship and residency in internal medicine at Bellevue Hospital in New York City. Later, he completed subspecialty training in Infectious Diseases at the Montefiore Medical Center and at Albert Einstein College of Medicine. Casadevall's major research interests are in fungal pathogenesis and the mechanism of antibody action. In the area of Biodefense he has an active research program to understand the mechanisms of antibody-mediated neutralization of Bacillus anthracis toxins. Casadevall was elected to membership in the American Society for Clinical Investigation, the American Academy of Physicians, and the American Academy of Microbiology. He was elected a fellow of the American Academy for the Advancement of Science and has received numerous honors. Casadevall is the Editor in Chief of mBio, the first open access general journal of the American Society of Microbiology. He serves in the editorial board of the Journal of Clinical Investigation, The Journal of Experimental Medicine, and The Journal of Infectious Diseases. Previously he served as Editor of Infection and Immunity. He has served in numerous NIH committees including those that drafted the NIAID Strategic Plan and the Blue Ribbon Panel on Biodefense Research. He is currently a member of the National Science Advisory Board for Biosecurity.

Anubhav Kaul is a graduating medical student at Ross University, with a BA in Molecular Biology and Biochemistry from Boston University. His research experience ranges from investigations of prostate cancer immunotherapy to clinical studies in cardiology and nephrology, including public health investigations in palliative care, chronic disease management, and patient care coordination. This year, he will begin a Masters in Public Health from the Dartmouth Institute and will subsequently pursue a residency in Internal Medicine. He is also the director of recruitment at Doctors for America, a non-profit organization advocating for accessible, affordable, and quality healthcare for all Americans.