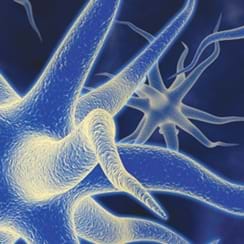 In the years since the identification of microRNAs , researchers have found that these nucleic acids—and other small noncoding pieces of RNA—comprise an enormously important, highly conserved, and previously unknown gene regulation system in animals. On November 2, 2009, leading neuroscientists gathered at the Academy to talk about how these RNAs control the development and operation of another important system: the brain.

The presentations spanned a wide range of model organisms and biochemical pathways, but three general themes emerged. Eric Lai, Shai Shaham, and Mark Mehler discussed the many ways in which noncoding RNA regulates and directs neuronal development; Fiona Doetsch, Anne Schaefer, Ken Kosik, and Priya Rajasethupathy showed how these molecules govern and maintain brain function postnatally; and Neil Renwick and Markus Hafner described new techniques researchers can use to analyze noncoding RNA regulation, regardless of what systems they study.

Multimedia is available from:

Eric Lai received his BA from Harvard University and performed thesis work in the laboratory of Gary Ruvkun, where he learned about developmental gene regulation in C. elegans. He did his PhD at UC San Diego with James Posakony on Drosophila neural patterning and Notch signaling, and continued to study these topics as a postdoc with Gerald Rubin at UC Berkeley. He joined the faculty of Sloan-Kettering Institute in 2005.

Thomas Tuschl received a diploma in chemistry from the University of Regensburg in Germany and a PhD in chemistry from the Max Planck Institute for Experimental Medicine and the University of Regensburg. He is associate professor and head of the laboratory for RNA molecular biology at the Rockefeller University. He has received the Wiley Prize in the Biomedical Sciences from the Wiley Foundation and the 2003 AAAS Newcomb Cleveland Prize for an outstanding paper in Science.

Fiona Doetsch is an assistant professor in the Departments of Pathology, Neurology, and the Center for Neurobiology and Behaviour at Columbia University. She received her PhD from the Rockefeller University in New York City. She was a junior fellow in the Society of Fellows at Harvard University and at the Radcliffe Institute for Advanced Studies. She joined the faculty of Columbia University in 2003.

Markus Hafner obtained his Diplom in chemistry from the University of Bonn, Germany in 2002. In 2007 he obtained a PhD in biochemistry under the supervision of Michael Famulok at the University of Bonn, working on the identification of small-molecule inhibitors for cytohesins, a class of small guanosine exchange factors. Since 2007 he is a postdoctoral fellow in the lab of Thomas Tuschl at the Rockefeller University.

Kenneth Kosik is Harriman Professor of Neuroscience Research of the Department of Molecular, Cellular, and Developmental Biology and codirector of the Neuroscience Research Institute at the University of California, Santa Barbara. Kosik's research focuses on both the mechanisms of neuronal plasticity and its impairment in neurodegeneration.

Mark F. Mehler is the Alpern Professor and University Chairman of the Saul R. Korey Department of Neurology, director of the Institute for Brain Disorders and Neural Regeneration, professor of neurology, neuroscience, and psychiatry, and behavioral sciences, and neurologist-in-chief at the Albert Einstein College of Medicine. His recent research focus has included molecular mechanisms mediating mammalian forebrain development, neural stem cell biology, the pathogenesis of nervous system disorders, with a particular emphasis on neurodegenerative diseases, and epigenetics and epigenomic and regenerative medicine with special emphasis on the roles of different classes of non-coding RNAs and RNA editing and DNA recoding in neural lineage specification, maturation, maintenance, plasticity and neural connectivity and in dynamic interactions with other components of the epigenome.

Neil Renwick is an instructor in clinical investigation in the Laboratory of RNA Molecular Biology (Tuschl Lab), Rockefeller University. His research focuses on defective post-transcriptional regulation of gene expression in neurological diseases. He received his MBChB from the University of Otago, New Zealand and his PhD in virology from the University of Amsterdam, the Netherlands, and is a diplomate of the American Board of Pathology.

Anne Schaefer is a research associate in the Laboratory of Molecular and Cellular Neuroscience, headed by Paul Greengard, Vincent Astor Professor and Nobel Laureate 2000, at the Rockefeller University. Schaefer did her graduate work in Berlin and New York City, receiving her MD/PhD from the Charité Berlin in 2004. Schaefer began her postdoctoral fellowship in the Greengard Laboratory at the end of 2004 studying the role of miRNAs in adult brain function. She has received a number of awards including the German National Merit Foundation scholarship, the Hans-Hench award, a German Research Foundation (DFG) scholarship, and a Robert Leet and Clara Guthrie Patterson Trust Research Grant Award.

Shai Shaham is an associate professor at the Rockefeller University in New York. After completing doctoral studies at the Massachusetts Institute of Technology with H. Robert Horvitz, and postdoctoral studies at the University of California, San Francisco with Ira Herskowitz and Cori Bargmann, Shaham joined Rockefeller as an assistant professor in 2001. Since then, his lab has continued studies of programmed cell death, initiated during his graduate studies, uncovering a novel morphologically conserved pathway for cellular demise. His lab has also developed the model organism C. elegans as a unique setting to study glial cells, the major components of vertebrate nervous systems. These studies have revealed that glia play essential and dynamic roles in the development and function of the nervous system.