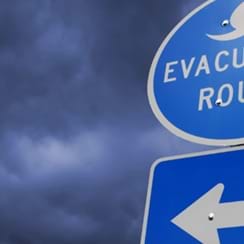 Facing the Elements: Transportation System Resilience in an Era of Extreme Weather and Climate Change

Presented by the Greening Transportation and Infrastructure Discussion Group

On March 2, 2011 the Greening Transportation and Infrastructure Discussion group hosted a panel discussion titled Facing the Elements: Transportation System Resilience in an Era of Extreme Weather and Climate Change. In terms of weather, it has been an eventful autumn, with freak snowstorms and tornado-like windspeeds in Brooklyn. Given these problems with snow and wind, New Yorkers might be surprised to learn that the primary source of concern for policy-makers is actually the potential for more frequent and intense flooding events.

In her introduction Rae Zimmerman, Professor of Planning and Public Administration at New York University, emphasized the capricious character of weather events. She opened the panel discussion by querying whether the now-separate efforts of various government agencies can be combined to better combat flooding. She also solicited panelists' feedback on the efficacy of using incremental change to undertake the massive challenge of fortifying transportation and infrastructure against the impacts of climate change.

According to Ken Kunkel, NOAA's (National Oceanic and Atmospheric Administration's) lead scientist for the National Climate Assessment, "Nor'easters" are the main extreme weather threat to New York City. Nor'easters, storms that exhibit an area of low pressure with a center off the East Coast and with winds coming in from the northeast, occur throughout the year. In fact, this past winter's snowstorm was a Nor'easter. Kunkel began his presentation by identifying weather events that would have an effect on transportation in general. He then narrowed the scope to events that are particular to the North East. Kunkel's data showed that extreme precipitation events have become more frequent—instead of getting four inch events every five years as we did three or four decades ago, these events are now occurring every three years or so. Interestingly, the total number of winter snow storms has not increased; however, there has been a significant increase in the number of strong winter snow storms, those with wind speeds greater than 50 miles per hour. By contrast, the number of geographic areas that now experience low snowfall, as opposed to higher snowfall, has gone up.

Thomas Abdallah, a representative from the Metropolitan Transportation Authority (MTA), provided an overview of the mechanisms being implemented by MTA New York City Transit to meet its pollution prevention and sustainability goals, as well as to mitigate the impact of severe weather. During flood events, the main concern for the MTA is keeping water from reaching the "third rail," the electrified rail that carries power to the trains. If water reaches the third rail the subway system will inevitably shut down.

Andy Wiley-Schwartz provided insights into how the NYC Department of Transportation (DOT) has been developing a program for public space and has been changing city streets and transportation infrastructure to mitigate the effects of climate change and to adapt to future extreme weather events. Wiley-Schwartz also provided an overview of the NYC Street Design Manual, a document provided by the DOT as a source of policy and design guidance for those involved in street and sidewalk improvement projects.

Since the early 2000s, the NYC Department of Environmental Protection (DEP) has been looking into the impacts of climate change and doing so by drawing from the expertise of regional academic institutions. Angela Licata illustrated how the DEP has been working to implement PlaNYC goals, which were further described by Adam Freed. One of the DEP's new initiatives focuses on understanding changes to intense five-year storms (a term that describes the statistical frequency of a storm of a particular rainfall and duration) and on using green infrastructure to manage storm water. This strategy is based on the expectation that the frequency of these intense storms is set to increase.

Adam Freed, deputy director of Mayor Bloomberg's Office of Long-Term Planning and Sustainability, ended the speaker presentations by revealing how NYC views the issue of climate change. City Hall, he said, considers a quantification of the impacts of climate change, an identification of how those impacts will affect NYC, and a strategy for dealing with these NYC ramifications. The PlaNYC process has been a crucial part of the City Hall's engagement with climate change. The third step in the PlaNYC process was the launching and continuous review of a city-wide strategic plan. The research component of PlaNYC was conducted by the NPCC (NYC Panel on Climate Change) assembled by Mayor Michael Bloomberg, and the panel's report was published by the Annals of the New York Academy of Sciences and can be found here. The NPCC also held a meeting at the Academy, the eBriefing of which is available here.

Rae Zimmerman is Professor of Planning and Public Administration at New York University's Wagner Graduate School of Public Service and since 1998, Director of its Institute for Civil Infrastructure Systems (ICIS www.nyu.edu/icis). Her research and teaching include transportation from the perspectives of sustainability, climate change, natural hazards, environmental impacts and security. Publications in these areas appear in the Journal of Risk Research, Risk Analysis, the Journal of Applied Security Research, the Journal of Urban Technology, and Current Issues in Environmental Sustainability. She is a Fellow of the American Association for the Advancement of Science, past president and Fellow of the Society for Risk Analysis, an appointed member of NYC Panel on Climate Change, and an appointed member of the Homeland Security Advisory Committee of the U.S. Environmental Protection Agency's Science Advisory Board. In 2010 and 2011 she presented at the Transportation Research Board Annual Meetings under the auspices of the TRB Critical Transportation Infrastructure Protection committee. She has a BA in Chemistry from the University of California, Berkeley, an MA in City Planning from the University of Pennsylvania, and a PhD in planning from Columbia University.

Thomas Abdallah is Chief Environmental Engineer for the Capital Program Management Department (CPM) of MTA New York City Transit. He holds a BS in Chemical Engineering from Rutgers University and he is both a Professional Engineer and a LEED® Accredited Professional. Abdallah has been with NYCT for 24 years and has extensive experience with all areas of the environmental disciplines including the National Environmental Policy Act, Waste Management, Air & Water Pollution Prevention, and Green Design. Abdallah is also directly responsible for CPM's ISO 14001 certified Environmental Management System. He has appeared in numerous television programs outlining NYCT's sustainability efforts, including, Sundance Channel's Big Ideas for a Small Planet, Discovery's Science Channel, and most recently in Channel 13's Going Green New York film documentary.

Adam Freed is the Deputy Director of Mayor Bloomberg's Office of Long-Term Planning and Sustainability, which was charged with developing and implementing New York City's long-term sustainability plan ("PlaNYC"). Since releasing PlaNYC in 2007, the City has enacted landmark legislation to increase energy efficiency in existing buildings, invested $80 million a year to reduce City government's greenhouse gas emissions, and launched a comprehensive climate resilience program. Freed developed the City's resilience efforts, chairs the NYC Climate Change Adaptation Task Force, which consists of 40 city, state, and federal agencies and private companies, is identifying climate vulnerabilities to the city's critical infrastructure, and is developing strategies to mitigate these risks. Freed has over 10 years of experience in city and state government. Prior to joining the Bloomberg Administration he served as the Assistant Comptroller for NYC in the Office of the New York State Comptroller. He also worked on several city, state, and national political campaigns. Freed received his master's in Urban Planning from NYU and is a member of the American Institute of Certified Planners.

Kenneth E. Kunkel is Lead Scientist for Assessments with the NOAA Cooperative Institute for Climate and Satellites and Research Professor with the Department of Marine, Earth and Atmospheric Sciences, North Carolina State University. He holds a BS in physics from Southern Illinois University–Edwardsville and an MS and a PhD in meteorology from the University of Wisconsin–Madison. His research has focused on regional climate variability, extremes, change, and modeling and he has published numerous scientific articles and book chapters on these topics. He has led several projects on the development and quality control of U.S. surface climate datasets used for evaluation of long-term historical trends in extreme climate events, including extreme precipitation, heat and cold waves, and snowfall. He is one of the lead authors on two recent synthesis and assessment reports of the U.S. Climate Change Science Program, entitled Weather and Climate Extremes in a Changing Climate and Climate Change Models: An Assessment of Strengths and Limitations.

Angela Licata is a Deputy Commissioner for the New York City Department of Environmental Protection (NYCDEP) and the director of the Bureau of Environmental Planning and Analysis (BEPA). She has worked for over 20 years with a diversified portfolio in the field of drinking water and wastewater infrastructure and is engaged in key initiatives for ensuring that long-term sustainability objectives are met. These include the opportunities for green infrastructure, water conservation, and improved harbor water quality. Licata oversees the forecasting and projections for water consumption, trend analysis, regulatory review, and scientific modeling and research. She is currently overseeing multiple planning efforts to increase storm water management, develop strategies and data for climate change adaptation, provide Superfund support for two recently listed NYC water ways (Gowanus Canal and Newtown Creek). Licata is a graduate of the State University of New York at Binghamton, where she earned a BA in Political Science with a concentration in Environmental Policy from Harpur College.

Andy Wiley-Schwartz is an Assistant Commissioner for Planning and Sustainability at New York City Department of Transportation. Wiley-Schwartz was hired by Commissioner Janette Sadik-Kahn in 2007 to develop a public space program, and a complete street design and planning process for DOT. In this capacity he developed and launched the NYC Plaza Program, an initiative of Mayor Bloomberg's PlaNYC2030 to develop new public spaces out of existing streets in communities across New York City. He also co-managed an effort to streamline and standardize streetscape improvements on New York City's streets. In addition, Wiley-Schwartz has supervised several special projects for the DOT Commissioner to measure, evaluate and promote public life in New York.

Prior to working at NYCDOT, Wiley-Schwartz was a Vice President at Project for Public Spaces, Inc. where he directed their Transportation Program. Wiley-Schwartz has conducted in-depth research into park partnerships, transportation facility development, public space programming and downtown and neighborhood revitalization programs. Prior to working at PPS, Wiley-Schwartz was a political analyst for Washington Analysis Corporation, an investment research firm, where he wrote and commented on political affairs and the impact of trade, monetary, and domestic policy on the financial markets.