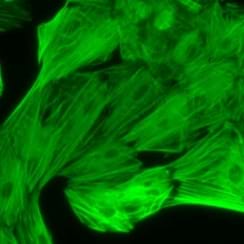 On October 22, 2013, scientists convened at the New York Academy of Sciences for a symposium titled Fibrosis: Therapeutic Target or Inevitable Outcome? It provided an opportunity for researchers in academia and the pharmaceutical industry to discuss gaps in our knowledge of the underlying biology of different fibrotic diseases, as well as challenges and promising strategies in drug development. As a condition occurring in many different organ systems and implicated in a variety of diseases, fibrosis represents an area of significant unmet medical need. Most of the talks focused on kidney or lung fibrosis, and researchers grappled with the difficulties posed by problematic animal models and the heterogeneity of patient populations affected by fibrosis. The symposium was presented by the Academy's Biochemical Pharmacology Discussion Group.

Katalin Kauser is vice president at Bayer HealthCare, heading the Hematology Research Department. Before joining Bayer she was vice president at Actelion Pharmaceuticals, leading the Cardiovascular Pharmacology Department. She also held positions at Boehringer Ingelheim and Berlex Biosciences. Kauser is a graduate of Semmelweis Medical University, Hungary, and completed a postdoctoral fellowship at the Medical College of Wisconsin. In addition to her MD, she also holds a PhD in physiology, and a Doctor of Science from the Hungarian Academy of Science. Kauser is interested in the pathophysiology of cardiovascular remodeling, the balance between fibrotic changes and regenerative mechanisms, and the cross-talk between structural and functional components of the cardiovascular system. She has been recognized for her research in vascular biology, especially in the field of endothelial dysfunction and endothelial nitric oxide synthase regulation bridging from physiology to regenerative medicine applications.

Scott MacDonnell obtained his undergraduate and Master's degrees in exercise physiology from the University of Delaware and completed his doctoral work in cardiovascular physiology at Temple University. He completed a postdoctoral fellowship at Temple University Medical School in the lab of Dr. Steve Houser. His fellowship research focused on identifying mechanisms responsible for the pathogenesis of heart failure. Specifically, his work examined the role of CaMKII in altered contractility, myocytes apoptosis, and transcriptional regulation associated with heart failure progression. This work has been published in Circulation Research and was recognized as a Best Manuscript by the editorial board in 2010. MacDonnell has also been recognized by the International Society for Heart Research and awarded the Young Investigator of the Year in 2008. MacDonnell is a principal scientist at Boehringer Ingelheim in the Department of CardioMetabolic Disease Research. He is focused on identifying novel therapeutic treatment options for chronic kidney disease, heart failure, and fibrosis.

Yasmina Bauer graduated from the University of Brittany, France, with a major in molecular microbiology and completed her Master's degree at the Biotechnology Research Institute of Novartis. During her PhD she discovered novel mechanisms of polarized growth in the lab of Prof. Peter Philippsen at the Biocenter in Basel, Switzerland, using genomics and cell biology tools. Following a postdoctoral position at the Biocenter, she joined the biotechnology company Morphochem, where she established a DNA microarray facility for chemical genomics. She joined Actelion Pharmaceuticals in 2004 as a lab head in the Drug Discovery Department. She established a genomics core unit dedicated to pharmacogenomics and toxicogenomics. Her work is focused on biomarker discovery using genomics and systems biology tools. She has worked on the discovery and characterization of biomarkers related to lung disease, cardiovascular disease, and fibrosis.

Jeremy S. Duffield is a physician scientist who graduated from Oxford University and Edinburgh University in the UK. After setting up his own lab as an assistant professor of medicine at Harvard Medical School he moved to the University of Washington, where he is an associate professor of medicine and pathology and an established NIDDK investigator at the Institute of Stem Cell & Regenerative Medicine and the Center for Lung Biology. He is also a member the Kidney Research Institute. His laboratory is focused on the role of innate immune response cells and monocytes in injury and repair and on the role of pericytes in microvascular remodeling and fibrosis. Duffield is a recipient of Young Investigator Awards from the British Renal Association and the Medical Research Society, of an NIDDK Young Investigator/Scholar Award, and of the American Society of Nephrology Young Investigator Award. He practices nephrology part-time at the University of Washington Medical Center, with special interests in systemic lupus erythematosis, systemic vasculitis, and pregnancy-related kidney disorders.

Raghu Kalluri is a professor in the Department of Cancer Biology at the University of Texas MD Anderson Cancer Center. He focuses on cancer biology and clinical and translational sciences. He holds a PhD from the University of Kansas Medical Center and an MD from Brown University School of Medicine.

Kumar Sharma is the director of Translational Research in Kidney Disease and a professor of medicine at the University of California, San Diego. Sharma takes a translational approach to diabetic complications and has expertise in developing phenotype analysis using imaging, molecular, and biochemical tools, genomics, microarray, proteomics, and metabolomics. His group has linked clinical phenotypes of patients with genomics and biomarkers. His recent studies have employed novel imaging and systems biology approaches to understand mechanisms of obesity-related complications and diabetic kidney disease. His work has elucidated anti-fibrotic therapies for chronic kidney disease and his group has recently completed a multi-center National Institutes of Health-funded clinical trial with an oral anti-fibrotic agent. He is currently focused on developing biomarkers for chronic kidney disease and diabetic complications with new funding from the NIH. In particular, recent metabolomic studies in humans have led to insights into the pathogenesis of diabetic complications and the role of the kidney in energy metabolism.

Dan Wu is a professor in the Department of Pharmacology at Yale University School of Medicine. He is also a member of the Vascular Biology and Therapeutics Program at Yale Cancer Center and of Yale Stem Cell Center. He received his PhD working with Dr. Gordon Sato at Clarkson University's W. Alton Jones Cell Science Center and completed postdoctoral training with Dr. Melvin I. Simon at California Institute of Technology. He started his independent research career at the University of Rochester, relocated to the University of Connecticut Health Center, and then moved to his current position at Yale Medical School. His research interests focus on signaling mechanisms for Wnt and chemoattractants and their functions in a broad range of biological and pathophysiological processes. His laboratory is working on the characterization of a novel mTORC2-mediated persistent PKC activation mechanism that is important for fibroblast migration and lung fibrosis development.

Alla Katsnelson is a freelance science writer and editor, specializing in health, biomedical research, and policy. She has a doctorate in developmental neuroscience from Oxford University and a certificate in science communication from the University of California, Santa Cruz, and writes regularly for scientists and non-scientists alike.

This symposium has been endorsed by the American Thoracic Society.