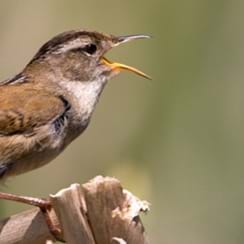 From Birdsong to Baby Talk: Studies of Language Development

Anyone who has raised a child knows that infants have a remarkable desire and ability to learn to use language. How they do so, however, is not well understood, and presents a question that is of great interest to researchers from many different disciplines.

In an October 26, 2006, meeting of the Academy's Imaging Discussion Group five language researchers gathered to describe recent animal and human studies of how auditory information is processed in the developing brain. Their work focused not only on normal and language-disordered human infants, but also on birds whose song provides a model of language development.

David Vicario is an associate professor in the Department of Psychology at Rutgers University. His research focuses on sensorimotor processes that are used to acquire and produce learned behaviors.  Vicario's laboratory utilizes behavioral, physiological, and anatomical techniques to study important aspects of the vocal communication system in developing and adult songbirds, including the acquisition and patterning of learned vocalizations, auditory discrimination and auditory memories for species-typical vocal sounds, and how auditory information relevant to vocal learning reaches defined vocal motor regions in the forebrain.

Lori Holt is an associate professor in the Department of Psychology at Carnegie Mellon University and is affiliated with Pittsburgh's Center for the Neural Basis of Cognition. Her research interests include how general perceptual and cognitive mechanisms contribute to speech perception and how speech can be used to broadly understand auditory cognition. In her studies, she employs human perceptual and learning paradigms as well as animal behavioral experiments and computational models.

Holt earned her PhD at the University of Wisconsin-Madison, where she trained in the psychology and neurophysiology departments. She was recently awarded a James F. McDonnell Foundation 21st Century Scientist Award for bridging Mind, Brain and Behavior and has been recognized by the Acoustical Society of America and Sigma Xi.

Michael Goldstein is an assistant professor in Cornell University's Department of Psychology. Goldstein's research interests include prelinguistic vocal development, social development and learning, developmental psychobiology, and comparative approaches to the development of communication. He studies infant development in the context of the family, with a focus on mechanisms of social learning.

Goldstein received his PhD in developmental psychology from Indiana University in 2001 and his BA in psychology and philosophy from the University of Colorado at Denver.

Jason Zevin is an assistant professor of psychology in psychiatry at the Sackler Institute for Developmental Psychobiology at Weill Medical College of Cornell University. He is currently involved in a wide range of neuroimaging and behavioral experiments to examine how speech perception in a second language depends on when learning occurs, how similar it sounds to one's native language, and how these factors are reflected in the activity of particular brain regions that are specialized for speech. He also uses computational models of word recognition to study how people translate spelling into sound. Zevin received his PhD from the University of Southern California in 2003.

April Ann Benasich is a professor of neuroscience and the director of the Infancy Studies Laboratory at the Center for Molecular & Behavioral Neuroscience (CMBN), Rutgers University, Newark. She is also the director of the Carter Center for Neurocognitive Research, one of the Carter Centers for Brain Research in holoprosencephaly and related malformations.

Benasich received her PhD from New York University in experimental and clinical psychology. She also has a BSN in nursing and fifteen years of medical experience, including work as supervisor in pediatrics and experience with high-risk infants in the NYU Medical Center Neonatal Intensive Care Unit. Her research at NYU focused on early infant behaviors (i.e. attention, habituation, and memory) and their relation to later cognitive and linguistic competence.