Condensed matter physics, broadly defined as the study of the structure and properties of matter at the atomic scale, has grown to be the largest sub-field of physics. Spanning the physics of "soft" matter (thermally deformable) and "hard" matter (characterized by structural rigidity), this field claims many topics from superconductivity to superfluids. On November 11, 2011, researchers convened for the biannual Gotham-Metro Condensed Matter Meeting at The New York Academy of Sciences. This conference provided the opportunity for enlightening discussion on findings in a diverse range of topics and featured presentations by graduate students as well as by researchers at the top of their fields.

Vinothan Manoharan of Harvard University gave the plenary talk on soft condensed matter physics wherein he discussed his exploration of the interactions that lead to controlled self-assembly. Self-assembly, a spontaneous thermodynamic process in which matter forms an ordered structure, is a common phenomenon in biology and holds promise in engineering for achieving a bottom-up fabrication approach for nanotechnology. Manoharan's group explored the statistical mechanics of assembly in colloidal particles as a function of n particles (where n ≤ 10). The group used optical imaging to determine what structures were assembled from the particles. Results indicated that the number of possible distinct configurations increases rapidly with the number of particles. Manoharan was then interested to determine what structures should occur from a thermodynamic perspective. To answer this question, Manoharan's colleagues used a computational rigid packing approach which enumerated all possible adjacency matrices i.e., all the ways the particles could be positioned relative to one another. The theoretical results further elucidated the exponential increase of possible configurations as a function of n and also showed that, for each n, the possible configurations are energetically degenerate.

Manoharan then delved in to the possibility of achieving directed self-assembly, which means achieving a global energy minimum in the free energy landscape. The researchers hybridized colloidal particles to DNA to drive specific interactions between particles, thus energetically stabilizing those interactions over other previously degenerate states. However these modifications did not completely eliminate local minima so the yield of desired structures was not 100%. Manoharan concluded his presentation with an introduction to his current work exploring perfect assembly: a system with no local minima that will always spontaneously form one specific structure.

Shoucheng Zhang of Stanford University gave an in-depth presentation of theoretical and experimental progress in the field of topological insulators—materials that are insulators in the bulk but conductive along their surface edges. Prior to the discovery of topological insulators, every known state of matter was classified by its spontaneously broken symmetries. For example, crystalline solids are distinguished by their broken translational symmetry and magnetic materials by their broken rotational symmetry. The discovery of the quantum Hall state defied this classification, as the quantum system has no spontaneously broken symmetry, and the material is instead characterized by its topology. Because of their dependence on topology rather than on specific geometry, materials in the quantum Hall state are called topological states.

The quantum Hall (QH) effect is the quantized form of the Hall Effect. In the classical Hall Effect when a magnetic field is applied transverse to an electric current, a potential difference, known as the Hall voltage is induced. The quantum Hall (QH) effect has been observed in semiconductors that are exposed to a strong magnetic field at low temperatures. The QH effect makes it possible to have spatially separated, counter-propagating charge flow because electrons only travel along the outer edge of the semiconductor. This ordered and dissipation-free charge transport state would be favorable for semiconductor applications because it eliminates the random scattering of colliding electrons that gives rise to resistance. However, the requirement of a strong magnetic field and low temperature make it impractical. Materials exhibiting quantum spin Hall (QSH) states, also known as topological insulators, have been shown to circumvent this restriction. Here, QSH states make it possible for charges with opposing spins to flow in opposing directions without breaking time reversal symmetry (and without the need of a magnetic field). The spin and momentum of a topological insulator's charge carriers are, at the material's surface, locked at right angles, suppressing scattering and increasing conductivity. Backscattering around impurities is eliminated by destructive interference. 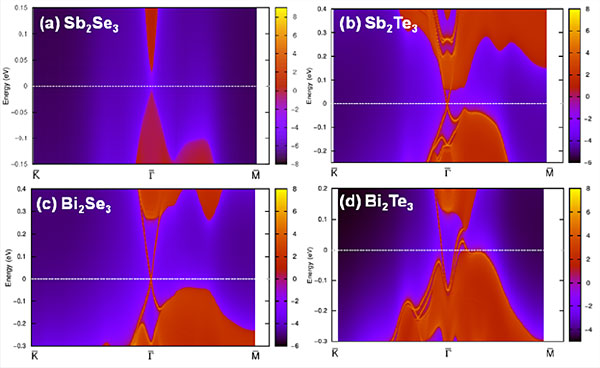 Surface states of 3D topological insulators, confirmed to be a single Dirac state by use of Angle-resolved photoemission spectroscopy (ARPES). The surface bands intersect at the "Dirac point" inside of the bulk energy band gap. (Image courtesy of Shoucheng Zhang)

Zhang then expounded on topological field theory, a method of computing certain kinds of topological properties and therefore a means of predicting how a topological insulator will behave. Zhang illustrated that the electromagnetic response can be written in terms of topological terms where the parameter is expressed as an integral of a total derivative. This computation results in integer values, which explains quantized Hall conductance, and is topological for a periodic system, which means that global properties are robust to slight changes in material properties. Because 3D topological insulators experience a topological magneto-electric effect that is quantized, an applied electric or magnetic field results in, respectively, a magnetic moment or electric polarization with a quantized coefficient. Zhang explained that this quantized description of the fine structure constant can be expressed experimentally in terms of in terms of a Kerr and Faraday rotation of linearly polarized light. Zhang concluded his talk with an introduction to topological superconductors, which are analogous to quantum spin Hall states: with Majorana particles with helical chirality on the edge. Zhang posited He3B as a potential topological superconductor system.

Kicking off the student talks, Shiqi Li of the City College of New York offered a strong case for the existence, currently debated, of a metal-insulator transition as temperature goes to zero in two dimensions. Li and colleagues measured the thermoelectric power at low temperatures in a strongly-interacting metal-oxide–semiconductor field-effect transistor (MOSFET) system. Their results indicate that the thermopower, the induced thermoelectric voltage in response to a temperature gradient, tends to approach infinity with decreasing electron density at a finite density independent of disorder. To Li, this suggests that the transition is interaction driven.

The afternoon's short talks began with Wei Li of Lehigh University, who discussed the use of self-assembly to drive encapsulation in Janus oblate ellipsoids. The team derived the efficiency of these amphiphilic (geometrically and chemically anisotropic) ellipsoids at encapsulating spherical particles in a computational model of self-assembly. They computed and visualized the encapsulation process using Monte Carlo simulation. Li demonstrated a high encapsulation efficiency that is encouraging for practical applications in biomedical engineering and materials science.

Daniel Gopman of New York University presented the development of a model of switching field distributions of Cobalt/Nickel nanomagnets in the presence of spin torque transfer and thermal fluctuations. Co/Ni nanomagnets form a two-state spin transfer device that is appropriate for testing magnetization reversal induced by spin transfer with thermal activation. Gopman modeled the switching field distributions (SFD) by a single field energy barrier with current dependence. The model showed the magnetic reversal to be asymmetric. Gopman also showed that the SFD was valid in a non-equilibrium state even in the presence of spin transfer torque.

Sriram Ganeshan of Stony Brook University discussed developments of a new class of fluctuation relations for individual currents in specific electrical circuit configurations. Fluctuation theorems provide universal constraints for understanding non-equilibrium systems. Ganeshan demonstrated that fluctuation theorems can be expanded to the regime of individual circuit components, which might not be universally valid, but which are important for understanding local system parameters. These Fluctuations for Current Components (FRCCs) are also applicable in the presence of some quantum coherence effects.

Guy German of Yale University then presented his findings on fluid interface interactions of colloidal particles. German focused his discussion on Janus Dumbbell particles developed in his advisor Eric Dufresne's lab, which are characterized by their chemical and geometrical anisotropy (amphiphilicity). For highly asymmetric wetting, membranes were formed at interfaces. As the amphiphilicity of particles increases, the contact angle at the interface becomes more oblique. For strongly amphiphilic particles, the stress required to break the membranes is much higher than predicted by thermodynamic stabilization. German argued that this discrepancy could be due in part to packing phenomena. Following the short talks, representatives from academia and industry joined a panel discussion moderated by Matt Dawber of Stony Brook University on the subject of the future of condensed matter in industry. Panelists weighed the pros and cons of research in industry.

Vinothan N. Manoharan is an Associate Professor of Chemical Engineering and Physics at Harvard University. His research focuses on understanding how systems containing many particles suspended in a liquid—such as nanoparticles, proteins, or cells—organize themselves into ordered structures like crystals, viruses, and even living tissues. His lab uses optical microscopy and holography to watch these systems self-assemble in real time. The goal is to discover new, general physical principles that underlie complex systems and to apply these principles to practical problems in nanotechnology and medicine. Manoharan received his PhD from the University of California, Santa Barbara in 2004 and worked as a postdoctoral researcher at the University of Pennsylvania before arriving at Harvard in 2005.

Shoucheng Zhang is the JG Jackson and CJ Wood professor of physics at Stanford University. He received his BS degree from the Free University of Berlin and in 1983, and his PhD from the State University of New York at Stony Brook in 1987. He was a postdoc fellow at the Institute for Theoretical Physics in Santa Barbara from 1987 to 1989 and a Research Staff Member at the IBM Almaden Research Center from 1989 to 1993. He joined the faculty at Stanford in 1993. He is a condensed matter theorist known for his work on topological insulators, spintronics and high temperature superconductivity. He is a fellow of the American Physical Society and a fellow of the American Academy of Arts and Sciences. He received the Guggenheim fellowship in 2007, the Alexander von Humboldt research prize in 2009, the Europhysics prize in 2010 and the Oliver Buckley prize in 2012 for his theoretical prediction of the quantum spin Hall effect and topological insulators.

Demi Ajayi is a second year PhD student in Mechanical Engineering at Columbia University where she works in the Optical Nanostructures Laboratory. Her research currently focuses on studying energy transfer properties of quantum dots for solar energy applications.