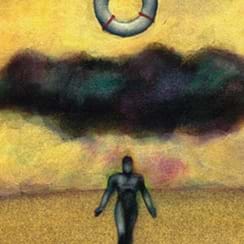 From Molecules to Mind: The HPA Axis in Mood, Metabolism, and Stress

The hypothalamic-pituitary-adrenal (HPA) axis is best known as the "stress response," and that's not a bad way to think of it, at least for a start. This system is famous for its ability to rapidly dial up or dampen down a huge variety of body functions—oxygen and glucose levels, water balance, blood pressure, immune activation, and overall arousal—in response to a stressor.

A daylong conference on the role of hypothalamic-pituitary axis in CNS disease was held at the Academy on February 19, 2008. The talks introduced new research in such diverse subjects as the connection between sleep and obesity, stress-related pathology in Alzheimer's disease, the distinction between sleepiness and fatigue, and the predilection for fatty, sugary foods. Each of these subjects was part of a constellation of ideas that begins to explain how vertebrates quickly modify their physiologies in response to changing environmental conditions—and what goes wrong when these mechanisms go out of balance.

Brain Basics: Understanding Sleep
The National Institute of Neurological Disorders and Stroke put together this primer on sleep and the brain.

The Hypothalamus and Pituitary Gland: Introduction and Index
A primer on hypothalamic-pituitary-adrenal axis function and anatomy can be found at Colorado State University's pathophysiology Web site.

The Neurobiology of Stress, Fear, and Anxiety: Basic and Clinical Aspects
Six lectures on stress and the brain featuring Joseph LeDoux, Elizabeth Phelps, and others produced especially for the Web are hosted by International Affairs Committee/U.S. National Committee of the Society for Neuroscience and the National Academy of Sciences.

Obesity Research at the NIH
This website presents information about NIH-supported research to facilitate progress towards obesity prevention and treatment.

Stress and the Struggles of Modern Life: Obesity, Insomnia, and Inflammation

Lupien SJ, Evans A, Lord C, et al. 2007. Hippocampal volume is as variable in young as in older adults: implications for the notion of hippocampal atrophy in humans. Neuroimage 34: 479-485.

Carlos Forray has worked for more than 16 years in the discovery and target assessment of G-protein coupled receptors at Synaptic Pharmaceutical Corp and Lundbeck Research USA, where he led efforts in the discovery of small molecule ligands for GPCRs to enable in vivo target assessment and lead optimization. An integral part of these efforts involved the discovery of novel GPCRs activated by neuropeptides, as well as in the identification of endogenous ligands for orphan GPCRs. Currently his work is in the translational research arena, to support the development of new treatments for depression and anxiety.

Forray holds an MD degree from the National University of Mexico, and was a senior research fellow in pharmacology at the Mayo Clinic. Before joining Synaptic, Forray was an assistant professor in the Department of Pharmacology at the University of Maryland, School of Pharmacy, and earlier associate professor at the Mexican Institute of Psychiatry, in Mexico City. Forray is a member of the Endocrine Society and the Society for Neuroscience.

Mary Dallman majored in chemistry at Smith College, where she fell in love with the cyclopentanoperhydrophenanthrene ring structure of cholesterol and the steroid hormones. Since then, she has focused on the physiology of stress steroids during her PhD work in physiology at Stanford, and as a post-doctoral fellow and then as a faculty member in physiology at UCSF. Much of her work has entailed the study of the inhibitory feedback regulation of the brain-pituitary-adrenal stress axis by its final product, corticosterone. In the most recent years she has examined the effects of chronic stress on corticosteroids, and their effects on feeding behavior and obesity.

Merali's research endeavors, supported by grants from CIHR and NSERC, strive to characterize the body's response to stressful and appetitive events, and the relationship of stressors (including early-life trauma) to mood and anxiety disorders. Another focus of his research is also to determine how pharmacological interventions (pharmaceutical and nutriceutical) may attenuate stress-induced pathophysiology. In this vein, he and his colleagues have been attempting to isolate anti-anxiety compounds from a variety of rare plants. Merali's research investigations extend from the behavioral to the cellular and molecular levels, and involve experimental animals as well as human subjects. Merali has published over a hundred scientific papers, more than 20 book chapters and over 100 conference presentations.

Alexandros Vgontzas is a professor of psychiatry at Penn State College of Medicine. He received his MD from the Faculty of Medicine University of Athens in 1978. He completed his residency at Penn State Milton S. Hershey Medical Center.

Sonia Lupien is the founder and director of the Centre for Studies on Human Stress at the Douglas Hospital in Montreal, Canada, and is a scientist affiliated with the Department of Psychiatry at McGill University. She received her PhD from the University of Montreal, and she completed postdoctoral research training at the University of California in San Diego and at Rockefeller University in New York. She leads the Laboratory of Human Stress Research that specializes in measuring the acute and chronic impact of stress hormones on learning and memory in human populations.

In 1998, Lupien found that high levels of stress hormones in older adults are linked to both memory impairments and atrophy of the hippocampus, a brain structure critical to memory and which shrinks as Alzheimer's disease progresses. Two years later, she showed that children from low socioeconomic status present higher levels of stress hormones, when compared to children from high socioeconomic status. Her future projects include a research program on detection and intervention for stress in the workplace, as well as the development of the DeStress for Success Program that aims at educating children and teenagers on stress and its impact on learning and memory.

Frank LaFerla is professor of neurobiology and behavior at the University of California, Irvine, codirector of the Institute for Brain Aging and Dementia, and a fellow at the Center for the Neurobiology of Learning and Memory. LaFerla's research focuses on the molecular pathogenesis of Alzheimer's disease. The lab has shown that the intracellular domain of APP plays a physiologic role in phosphoinositide-mediated calcium signaling. Gamma-secretase inhibition affects this process, as do presenilin mutations. The lab also is conducting extensive research with its triple-transgene mouse.

LaFerla received his PhD in microbiology from the University of Minnesota in 1990. After a postdoctoral fellowship in virology at the American Red Cross, where he studied HIV, he became interested in how viral mechanisms get protein into the brain, and thus in neurobiology and Alzheimer's disease. He joined UC Irvine in 1995 and became professor in 2005. He has been recognized, among other honors, with the Ruth Salta Junior Investigator Achievement Award in Alzheimer's Disease Research, as a Zenith Fellow by the Alzheimer's Association, and with a MetLife Foundation Award for Medical Research in Alzheimer's disease in 2006.