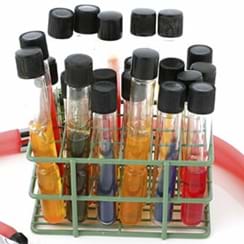 From Test Tubes to Patient Care: Deciding if an MD-PhD is Right for You

Physician-scientists who can navigate the worlds of patient care and academic research are in great demand; as a result, over 100 combined MD-PhD programs that integrate training in both areas have been established in the U.S. The full curriculum, including coursework, doctoral research, and clinical experiences, takes an average of 7 to 8 years, after which graduates typically enter residencies and fellowships, and many ultimately end up in faculty positions at medical research institutions.

Representatives from the AAMC-GREAT Group (Association of American Medical Colleges Group on Graduate Research Education and Training) came to the Academy on July 1, 2010, to advise an audience of over 200 undergraduates engaged in summer research programs. Past chair of the AAMC-GREAT Group, Skip Brass, MD, PhD, opened with the presentation "MD-PhD: Is it Right for Me?" He gave a comprehensive overview of the physician-scientist training and career path, how to apply to MD-PhD programs, and what schools look for in applicants. Following the presentation, a panel of MD-PhD program directors and administrators took questions from the audience.

If you are struggling with the decision of whether to apply to medical school or graduate school, this seminar can help you weigh the option of a combined degree program.

MD-PhD: Is It Right for Me?

Professor of Medicine and Pharmacology
University of Pennsylvania
e-mail

Lawrence (Skip) Brass is a 1970 graduate of Harvard College and received his MD and PhD from Case Western Reserve University in 1977. He stayed at CWRU for residency training in internal medicine before becoming a fellow in Hematology-Oncology at Penn in 1979. He has been a member of the Penn faculty since 1982, served as vice chair for research in the Department of Medicine from 2004 to 2007, and is currently professor of medicine and pharmacology. He became associate dean and director of the MD-PhD program in 1998. He has been active at the national level in the development of training programs for physician-scientists and is a past president of the National Association of MD-PhD Programs and was chair of the AAMC GREAT group section on MD-PhD training programs. He is a current member of the NIH study section that reviews T32 training grants, including NIGMS MSTP grants.

Skip's research interests lie in the fields of hemostasis and vascular biology. He is an elected member of the American Society for Clinical Investigation and Association of American Physicians, an Established Investigator of the American Heart Association, and was a recipient of the IXth Biennial Award for Contributions to Hemostasis Research from the International Society of Thrombosis and Hemostasis.

Ruth Gotian was born in Israel, raised in New York, and is bilingual in Hebrew and English. She received her BS and MS in Business Management from the University at Stony Brook in New York in 1992 and 1994, respectively. After a two-year stint as an investment banker at Bank Leumi, Gotian realized that she missed working with students, something she had always done in college and graduate school. In 1996, Gotian joined the Weill Cornell/Rockefeller/Sloan-Kettering Tri-Institutional MD-PhD Program in New York City and has served as their administrative director ever since. Since joining the staff of the Tri-Institutional MD-PhD Program, Gotian has seen the size of the program increase by nearly 25%, the number of applications to their MD-PhD Program has increased by over 30%, and the number of underrepresented minority students in the program has doubled and is now one of the highest in the country.

Gotian also oversees the Gateways to the Laboratory Summer Program, unique program for college freshman and sophomores of underrepresented minority/disadvantaged backgrounds who may wish to pursue the combined MD-PhD degree. This first of a kind program has given Gotian the opportunity to speak about minority recruitment across the country at national conferences as well as the NIH, National Association of Allied Health Professionals Meetings, Annual Biomedical Research Conference for Minority Students (ABRCMS) and the National Association of MD-PhD Programs Meetings. Recently, she has been asked to advise program directors from Belgium, South Korea and England as they try to establish MD-PhD Programs in their countries.

David Roth was born in Houston, Texas and grew up partly in Texas and partly in Anchorage, Alaska. He went to Rice University, and after turning down a music scholarship majored in Biochemistry. He joined the MD/PhD program at Baylor College of Medicine in 1981, and graduated with the dual degrees in 1987. His Ph.D. studies focused on mechanisms of DNA end joining. He then pursued a residency in Anatomic Pathology at the National Cancer Institute, followed by a postdoctoral fellowship in Martin Gellert's lab at the NIH, where he became interested in the mechanisms underlying antigen receptor gene rearrangement and lymphomagenesis. Roth returned to Baylor College of Medicine in 1993 as a faculty member, where he was also an HHMI investigator. Following the devastating flood of the Texas Medical Center associated with Tropical Storm Allison, Roth moved his lab to NYU in 2002, where he joined the Skirball Institute and the Department of Pathology as the Irene Diamond Professor of Immunology. In 2004, Roth became the Chairman of the Department of Pathology, and in 2008 he became the Director of the NYU MSTP. The Roth lab continues to investigate mechanisms of lymphomagenesis, using a variety of mouse models. Roth has trained 21 graduate students, including 2 MSTP students, has won several teaching awards, and has a passion for Pugs.

Patrice Spitalnik is an assistant professor of clinical pathology at Columbia University College of Physicians and Surgeons. She has been the assistant director of the MD-PhD program for the past 7 years and is responsible for the coordination and management of the program in the medical, public health, bioengineering, and graduate schools. She is also the course director for the medical and dental school histology course and lectures in the pathology and surgical pathology courses to second and third year medical students, as well as to MD-PhD students.

She recently created a web-based teaching source of microscopic histology and pathology slides for the medical and dental school histology and pathology courses. Six years ago she created a new course for MD-PhD students on "Responsible Conduct of Research," in addition to a new clinical medicine program for MD-PhD students during the PhD portion of the program. She is interested in medical education related to the interface between basic research and clinical medicine and the training of physician-scientists. Finally, Spitalnik teaches science to middle and high school students in the Washington Heights neighborhood of New York City and thereby hopes to increase the diversity of physician-scientists, by recruiting and training middle school, high school, and undergraduate students.