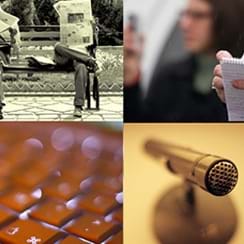 Genomes to Galaxies: Top Science in 2011

Scientific American is one of the oldest scientific magazines in the United States, and its mission is to give readers "the science beyond the headlines." As the magazine's editor-in-chief, Mariette DiChristina reviews the vast expanse of science, technology, engineering, and math (STEM) news and decides not only what is newsworthy but also what is of interest to the general public and, more importantly, to the magazine's readership.

DiChristina is the eighth person and the first woman to hold the title editor-in-chief at Scientific American. She joined the staff in 2001 as executive editor after a 14-year stint at Popular Science. She served as the president of the National Science Writers Association for 2009 and 2010 and has been an adjunct professor in the graduate Science, Health, and Environmental Reporting program at New York University for the past few years.

On March 16, 2011, DiChristina, spoke to the New York Academy of Sciences membership of K-12 teachers about her selection of the top science stories of 2011. The event was slightly modified to provide teachers with information about the March 11, 2011, earthquake and tsunami that hit Japan, information which they could use in their classes. She divided the content by topics: life science, chemistry, energy, earth science, and space science.

According to DiChristina, the life sciences are set for some big breakthroughs emerging from stem cell research, including FDA trials for treatments of macular degeneration. DiChristina also commented that there will be news on adult skin cell-derived pluripotent stem cells, as they begin to be used as models for studying medical conditions, especially those conditions without good animal models. Using adult stem cells side steps many of the ethical issues associated with embryonic stem cells.

In addition to more applications of stem cells, this may be the year we finally get a way to sequence a genome cheaply (for less than $1000) because of new, cheaper, table-top sequencers coming on the market. Such inexpensive sequencers could improve, among other functions, our ability to diagnose infections by sequencing bacterial genomes and to investigate the biochemical associations between genomes and diseases.

DiChristina then introduced the audience to the science of optogenetics. This technique offers less invasive ways of treating certain neurological conditions. Genes that respond to specific frequencies of light will be inserted into and expressed by certain neurons in the brain, and then a small fiber optic cable can be inserted to stimulate the protein products of those genes and to activate or silence the particular neurons. While still an invasive treatment this method is significantly less invasive that some current therapies.

DiChristina also predicted that we will see breakthroughs that allow us to understand how life began on this planet. While DNA and RNA can form spontaneously, they don't do so easily. Scientists are working to replicate the right chemistry and environment to figure out how to give life a little kick. All the individual steps for spontaneous life have been performed, and she thinks that this year they may find just the right spark for the whole process.

By far the biggest story of the year will be energy, and while DiChristina spoke about the specifics of nuclear power in Japan, she emphasized that there are dangers associated with all our methods of getting energy. The Deepwater Horizon oil spill, mountain top removal and the collapse of coal mines, and the hazards to birds by wind farms all serve as reminders that energy never comes without a price.

The big news in energy this year (aside from the dangers associated with obtaining it) is that scientists are very close to completing a fusion reactor that creates more energy than it expends. DiChristina was quick to joke that scientists always promise that fusion is 20 years in the future, but she noted that the National Ignition Facility may be up and running much sooner than expected. She warned, however, that some steep engineering challenges stand in the way of successful fusion: creating a structure that can withstand the heat, the complex process of making tritium (the radioactive isotope that forms part of the reactor's fuel), and the need to improve the reliability of lasers needed for the reactor.

One of the most fascinating topics discussed involved a shift in the way scientists and the public view minerals. Traditionally, the general public has not viewed the study of minerals as a dynamic and important field. According to DiChristina, a shift in thinking has allowed them to be cast in a new light, as artifacts of an evolving planet in a geologic timeframe. While all the matter in the universe is made of the same basic building blocks, it takes time for a planet's processes to mold these elements into the different chemical combinations needed for the earth's minerals. As we search for habitable planets, mineral composition can help us learn the characteristics of a foreign planet and understand the history of our own.

The MESSENGER satellite, whose descent to Mercury coincided with this event, is another big story of 2011. In a parallel to the changing perception of minerals, new scientific tools and theories have changed how the public thinks about Mercury. Once thought geologically dead, the MESSENGER mission has shown the planet to be volcanically active and magnetically dynamic because of its proximity to the Sun. By early April, 2011 NASA will have learned a tremendous amount about the planet from this satellite.

One of the reasons that science is so popular and energized right now is that a technology-aided movement called Citizen Science has made it possible for anyone to participate in research, DiChristina remarked. Some programs, such as Cornell University's BirdSleuth and the Great Sunflower Project from San Francisco State University allow anyone to gather data for large scale projects. Others like Galaxy Zoo from Zooniverse and SETI@Home from the University of California, Berkeley take advantage of people's amazing ability to detect patterns in images. These projects enlist members of the public to help look for galaxies and planets.

As DiChristina's presentation highlighted, 2011 is shaping up to be an amazing time in science. Publications like Scientific American have embraced their capacity to provide the public with "the science behind the headlines," and technology has expanded the ways these publications can deliver content and interact with readers and science enthusiasts.

Genomes to Galaxies: Top Science in 2011

Mariette DiChristina oversees Scientific American, ScientificAmerican.com, Scientific American MIND and all newsstand special editions. She is the eighth person and first female to assume the top post in Scientific American's 165-year history. A science journalist for more than 20 years, she first came to Scientific American in 2001 as its executive editor. She was named an AAAS Fellow in 2011. She was also the president (in 2009 and 2010) of the 2,500-member National Association of Science Writers. She is a former adjunct professor in the graduate Science, Health, and Environmental Reporting program at New York University.

Previously, she spent nearly 14 years at Popular Science in positions culminating in executive editor. Her work in writing and overseeing articles about space topics helped garner that magazine the Space Foundation's 2001 Douglas S. Morrow Public Outreach Award. In spring 2005 she was Science Writer in Residence at the University of Wisconsin–Madison. Her chapter on science editing appears in the second edition of A Field Guide for Science Writers. She is former chair of Science Writers in New York (2001 to 2004) and a member of the American Society of Magazine Editors and the Society of Environmental Journalists.