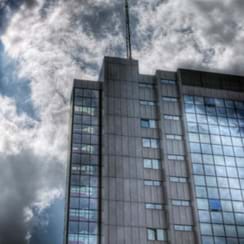 Get Past the Past: Climate Change In & Around NYC

Climate change holds great uncertainties, but the fact of climate change is not in doubt. Cities in which more than half the world's populations now live are ever more at risk. The New York Metro Area—with its dense population, concentration of essential infrastructure systems, and high-value buildings—is particularly vulnerable. Today, City government, the Port Authority, and private insurers are developing risk management tools for identifying, assessing, and managing risks posed by climate change. On the evening of September 23, 2010, experts Gary Yohe, a professor of economics at Wesleyan University, Megan Linkin of Swiss Reinsurance Corporation, and Christopher Zeppie of the Port Authority of New York and New Jersey, provided insights on how each of these stakeholder groups are thinking through complex climate adaptation issues—some of which are beyond the realm of past experience—and how decisions about adaptation are being made. This discussion followed from a New York City Panel on Climate Change (NPCC) report, Climate Change Adaptation in New York City: Building a Risk Management Response, which dealt with this subject matter in depth.

Gary Yohe of Wesleyan University provided some historical context for institutional climate action in New York City. As co-author of Chapter Two of the NPCC report, 'Adopting a risk-based approach,' he was well-placed to describe the origins and role of the NPCC as independent advisor to City's Climate Change Task Force. Yohe's presentation included a slide that emphasized the value of adaptation in the near to mid-term. At the core of Yohe's presentation was a methodology for assessing risk and prioritizing adaptation projects. The procedure for calculating risk takes into account the probability and consequence of an extreme event and assigns a risk level based on the multiplicative product of those two characteristics. In order to prioritize adaptation projects, the opportunity cost of using the resources available for one adaptation or another is weighed against the risk level from climate change and other sources of social and/or economic stress.

Megan Linkin of Swiss Re provided an insurer's perspective on climate risk. She began by describing how insurers and re-insurers chiefly determine risk by evaluating the prevalence of natural catastrophes against the increased exposure that results from human settlement in high peril areas. Based on that data, Linkin provided a risk outlook scenario for New York City and revealed that relative to other coastal cities, New York is considered highly susceptible to weather related perils. Insurers acknowledge that climate change has the potential to alter both the frequency and intensity of the events they protect against – high impact, low probability events. Therefore, the insurance industry has a vested interest in understanding the future implications of climate change. The Nat Cat models that insurers have developed to calculate the costs of natural catastrophes could be of significant use to adaptation planners; however, they are only as good as their input data. Linkin went on to describe the uncertainties that arise from the use of historical data and to highlight the need for regular updates to those data in order to improve the accuracy of projections.

The Port Authority of New York and New Jersey (PANYNJ) is unique as an independent, bi-state institution that serves the region by facilitating the transport of people and goods within and the region and with the rest of the world. PANYNJ announced its sustainability policy in March 2008 and indicated that it was aiming to reduce green house gas emission by 80% by 2050. Christopher Zeppie of PANYNJ's Office of Environmental Policy, Programs and Compliance, outlined what PANYNJ is doing not only to mitigate but also to adapt to the effects of climate change. Using available climate change data PANYNJ has identified which of its resources would be vulnerable to climate change. Zeppie detailed the Port Authority's plans and current activities and reiterated a need for regularly updated climate data, projections and models, and spoke also of a need for collaboration between stakeholders.

Use the tab above to find multimedia from this event

Megan Linkin is the atmospheric perils specialist for Swiss Reinsurance America Corporation in Armonk, NY. Her primary responsibility is assessing the insurance risk posed by hurricanes, tornadoes, hail and winterstorms globally by the development of tools and techniques for underwriters and actuaries. She also provides real-time weather forecasts during impending catastrophic events and is one of Swiss Re's experts on climate change science. She is a regular presenter at the annual meetings of the American Meteorological Society and the American Geophysical Union and has manuscripts published in the Journal of Climate and Weatherwise magazine. Linkin received her Masters of Science in 2006 and PhD in 2008 in atmospheric and oceanic science from the University of Maryland with her dissertation entitled "North Pacific Climate Variability and Arctic Sea Ice." She graduated magna cum laude from Rutgers University in 2004 with a Bachelor of Science in meteorology and a minor in mathematics. Linkin is an active member of the American Meteorological Society, American Geophysical Union, ReUnder40 and the New York City Panel on Climate Change. She currently resides in Manhattan.

Gary Yohe is the Woodhouse/Sysco Professor of Economics at Wesleyan University; he has been on the faculty at Wesleyan for more than 30 years. He was educated at the University of Pennsylvania, and received his PhD in Economics from Yale University in 1975. He is the author of more than 100 scholarly articles, several books, and many contributions to media coverage of climate issues. Most of his work has focused attention on the mitigation and adaptation/impacts sides of the climate issue. He is a senior member of the IPCC that was awarded a share of the 2007 Nobel Peace Prize. Involved with the Panel since the mid 1990's, he served as a lead author for four different chapters in the Third Assessment Report that was published in 2001 and as convening lead author for the last chapter of the contribution of Working Group II to the Fourth Assessment Report. In that Assessment, he also worked with the core writing team to prepare the overall Synthesis Report; and he continues to work for the IPCC as it begins preparations for the Fifth Assessment Report that will be published in 2013.

Office of Environmental and Energy Programs,
the Port Authority of New York and New Jersey
e-mail

He is a member of the Dean's Council, SUNY at Stony Brook, School of Marine and Atmospheric Studies, a member of the Advisory Committee of the Environmental Section of the New York Academy of Sciences, and a member of the Transportation Research Board's Committee on Climate Change and U.S. Transportation. Zeppie has been appointed by Mayor Bloomberg to serve on the Jamaica Bay Watershed Advisory Committee, and has represented the Port of New York and New Jersey at the C40 Conference working group on Port Facilities in Rotterdam and the C40 Aviation meeting in Los Angeles. Zeppie holds a BS degree in biology and ecology from Manhattan College, an MS degree in marine environmental science from State University of New York at Stony Brook, and a JD degree from St. John's University School of Law.

Alyssa Katz is the author of Our Lot: How Real Estate Came to Own Us (Bloomsbury, 2009), about the political history of the housing bubble and mortgage crisis. She teaches journalism at New York University and writes for The American Prospect, The Big Money, Salon, Partnership for Sustainable Communities, Housing Watch, Mother Jones, The Next American City and other publications. Katz also works with the Pratt Center for Community Development, an organization that helps community-based organizations in New York City's low- and moderate-income communities influence city planning and development, and teaches at New York University and Hunter College.

Alyssa was previously editor-in-chief of City Limits, an award-winning magazine investigating the institutions and policies at work in New York City's neighborhoods. Before covering urban policy, politics and housing, Alyssa was a cultural critic for The Village Voice, The Nation, and Spin. She received her BA from the University of Michigan, Ann Arbor, and was a 2005–2006 Revson Fellow at Columbia University.