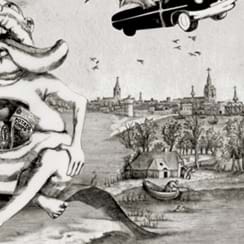 Have you ever wondered why the lists of ingredients on your favorite snack foods are so long? What is polysorbate 60 and why is it in a Twinkie? These food mysteries and more were revealed in the finale of Science & the City's Science and the Seven Deadly Sins series on May 23, 2013. Gluttony: Deconstructing Dinner featured moderator Dan Pashman, creator of The Sporkful; author Steve Ettlinger; and photographer Dwight Eschliman. The discussion explored the science, necessity, and controversy behind the mysterious—and sometimes linguistically challenging—ingredients in processed foods such as Twinkies, the topic of Ettlinger's 2008 book Twinkie, Deconstructed. He and Eschliman also highlighted excerpts from their upcoming book, Foodstuff, which will be available in 2014, presenting some of the unusual ingredients in processed foods, often with surprisingly common origins.

Ettlinger opened the evening by describing how he became interested in analyzing food. He found it challenging to explain to his children why ice cream contains so many ingredients—and what purposes the additives serve—and decided to investigate what we are really eating. He delved into the world of processed foods, choosing the familiar and iconic Twinkie as his subject. The Twinkie is an ideal choice to study the food industry, with 14 of the 22 most common industrial chemicals used in its manufacturing. His goal was to understand the history of Twinkie ingredients, determining how and why they are used as opposed to simply deconstructing the recipe. Despite some resistance from the manufacturer and its suppliers, Ettlinger uncovered the origins of Twinkie ingredients, which are sourced from around the world, and traced their paths to Drake Bakeries in Wayne, NJ, where Twinkies are produced.

Unlike Bordeaux wine and Camembert cheese, Ettlinger explained, most foods do not easily proclaim their origins. He began by identifying the sources of both natural and artificial ingredients in Twinkies and many other baked goods. Recognizable ones include flour, sugar, baking soda, salt, and oil. Unfamiliar ones include cotton cellulose, whey protein, sodium stearoyl lactylate, calcium sulfate, polysorbate 60, and others. Many ingredients are naturally occurring and are mined from the earth. Perhaps surprisingly, some are explosive before being chemically converted to the more inert substances used in baking. Ettlinger traced the origins of soda ash, the main component of baking soda, to Green River, Wyoming, the largest rock deposit of soda ash in the United States. Soda ash has many uses, such as for leavening, as a digestive aid in pig and cow feed, and as a component of glass and soap. Ettlinger pointed out that these rocks are, ironically, converted into the main leavening agents that give the Twinkie its light and airy appeal.

Ingredients in the Twinkie come from geographically disparate areas, from the oil palms of Asia to the cornfields of the Midwestern U.S. Some undergo many rounds of processing, which far removes them from their natural state (corn, for example, is processed to make high fructose corn syrup). Other ingredients are more enigmatic. Artificial flavors are often produced through pure chemistry and are not derived from the original foods they mimic. The creamy Twinkie filling contains no real cream, a fact many in the audience found stunning. Ingredients like diglycerides, polysorbate 60, and cotton cellulose create a smooth filling that will not spoil, helping to extend the life of a Twinkie far beyond the shelf life of the original recipe. 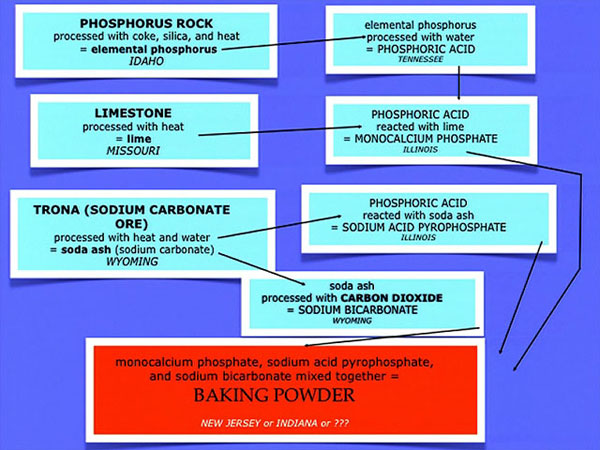 The process of forming baking powder exemplifies the complex chemistry that goes into creating many familiar food ingredients. (Image courtesy of Steve Ettlinger and Dwight Eschliman)

Another major food ingredient base that is mined from the earth may be more surprising: petroleum. Petroleum serves as a source of carbon, oxygen, and nitrogen in many food additives. Even vitamins, naturally abundant in fruits and vegetables, are manufactured in chemical plants using carbon derived from petroleum. Should we be concerned about sourcing ingredients from chemicals such as this? This question spurred a discussion of the fear and distrust that surround many of the additives in processed foods, popularly termed chemophobia. Pashman commented that many locavores, who consume only locally sourced food, believe that all chemicals and man-made foods are bad and that foods with fewer ingredients are better. Ettlinger pointed out that carbon, regardless of its source, is an organic building block, and that even an apple is composed of chemicals. He said that people often fear chemicals they do not recognize and avoid foods with a long list of ingredients. Instead, he said, consumers should evaluate the nature of the ingredients; even a five-ingredient food may not be healthy.

As well as traveling extensively to document the sources of Twinkie ingredients, Ettlinger investigated why these ingredients are necessary. In the 1930s, the Twinkie contained only a handful of ingredients, substantially fewer than the current thirty-seven. What purposes do they serve? The answer is quite simple: preservation. Techniques for food preservation have been used for thousands of years: jams, pickles, salt cod, and beef jerky are all examples. World War II and the population boom that followed it sparked a need for increased production and preservation of common foods such as baked goods, and thus the food-chemistry industry was born. Consumption trends in recent decades have led to the extensive use of processed foods in lieu of preparation from scratch. Preservation increases shelf life, allowing consumers greater flexibility, protecting companies from losing money to spoilage, and increasing manufacturing and large-scale mass production profits.

Chemical additives made it possible to mass-produce Twinkies and other baked goods for nationwide distribution. Ettlinger explained that the accurate baking, assembly, and packaging necessary for mass production would not be possible without consistency in the baking outcome, which is accomplished through the addition of chemical additives. In fact, many additives are used simply for production and preservation purposes and to keep food costs low. One audience member asked why processed foods are so cheap when their ingredients are numerous and labor-intensive to manufacture. Despite the complexity of the ingredients, it costs more in land and manual labor to produce a bag of carrots than a bag of chips; the chips also have a lower risk of spoilage, which drives up the price of natural, temperature-sensitive foods.

Not long after its publication, Twinkie, Deconstructed attracted the attention of Eschliman, a photographer who is interested in deconstructing things, including food. After reading Ettlinger's book, he decided to document the Twinkie's thirty-seven ingredients in photographs. Combining their interests, Eschliman and Ettlinger teamed up for the upcoming book Foodstuff, which will unravel the mystery ingredients in food favorites and feature photos of each ingredient. The panelists gave the audience a taste of their new book, with short excerpts from chapters on a popular soda and more nutritious-sounding items like beef stew and instant oatmeal. Eschliman also presented a visual breakdown of the ingredients in these foods, demonstrating the many natural and chemically derived additives in their unadulterated forms. He chose to display the ingredients in equal amounts because this presentation is more visually appealing and practical, since the ratios of the ingredients vary widely. The foods featured in Foodstuff share a number of ingredients with the Twinkie, particularly ingredients that enhance flavor, color, and texture; improve consumer appeal; and allow for a long, stable shelf life. So what does polysorbate 60 look like? It is a white waxy substance that is similar to other ingredients in snack cake fillings and instant oatmeal.

In a final question and answer session, Ettlinger and Eschliman were asked what their greatest concerns are for the food industry. Eschliman mentioned fear of the unknown, and explained that we do not fully understand the chemistry of some major ingredients and how their use will affect our health in the future. Ettlinger's response focused on our reliance on these ingredients—which require an international industrial network—and what this dependence means for the future of the food industry. Cost corruption, health laws, product availability, and government subsidies are variable and can significantly influence the industry's ability to obtain and utilize essential ingredients. He also argued that although processed foods may not be bad for us in small amounts, too many people rely on them as staples and therefore consume unhealthy quantities.

Eschliman and Ettlinger both reported that they have changed little about their eating habits and still consume sweet treats in moderation. Consumers are bombarded by nutrition labels, ingredient lists, calorie counts, and allergy warning labels, leading many to become distrustful of the additives in our foods. Indeed, with fast food, yellow no. 5, and chemically treated vegetables, it may seem difficult to avoid developing this fear. The best advice is to become proactive in understanding food ingredients. For better or for worse, we now know a little more about what we are really eating.

The Sporkful with Dan Pashman
Dan Pashman's blog features his adventures through the world of molecular gastronomy with interviews and personal stories.

Twinkie, Deconstructed
Steve Ettlinger's website presents excerpts from Twinkie Deconstructed, as well as information about his other books and details of upcoming presentations.

Dan Pashman is the creator and host of the James Beard Award-nominated podcast and blog The Sporkful, where he discusses, debates, and obsesses over ridiculous food minutiae in search of new and better ways to eat. According to Pashman, the blog is "not for foodies; it's for eaters." He is also a contributor to NPR's Weekend Edition Sunday and the co-host of Slate's Table to Farm podcast and Cooking Channel's Good to Know program. He is currently working on the first Sporkful book, to be published in 2014 by Simon & Schuster.

Dwight Eschliman is a photographer based in San Francisco. His work spans a variety of subjects, from athletic shoes to Legos, clean rooms to castles in Germany, the newest tech products to Twinkie ingredients. His editorial photography appears in New York Times Magazine, San Francisco Magazine, Esquire, WIRED, and other publications. His advertising projects include Apple, Palm, Scion, Microsoft, Audi, T Mobile, and others.

Steve Ettlinger is an author, editor, and book producer, and has helped create over forty books, all but two in the popular reference area. His books explain complex and daunting but common things like wine, artificial food ingredients, and DIY hardware. His seventh and most recent book is Twinkie, Deconstructed, which describes where artificial food ingredients come from and how they are made. He has written or edited books on ethnic cuisines, beer, and kitchenware, contributed to web sites, and helped create the bestselling series Wine for Dummies. Ettlinger is an occasional contributor to the Huffington Post and The Daily Beast and has written Op-Ed pieces for the Los Angeles Times and the New York Sun.