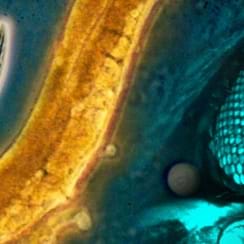 Angela DePace discussed high-spatial-resolution mapping of Drosophila embryos that gives a wealth of quantitative data for developing models of gene regulation. Stanislav Shvartsman showed that MAP kinase, the endpoint of a highly conserved protein phosphorylation cascade, features a common docking site for kinases that phosphorylate it, phosphatases that dephosphorylate it, and substrates that it acts on. Antonio Iavarone described how systems biology analysis helps to identify specific molecular pathways that lead cells to remain in a stem-cell state or to begin differentiation.

Berkeley Drosophila Transcription Network Project
The Berkeley Drosophila Transcription Network Project is a multidisciplinary team at Lawrence Berkeley National Laboratory, the University of California, Berkeley, and the University of California, Davis. Their goal is to decipher the transcriptional information contained in the extensive cis-acting DNA sequences that direct the patterns of gene expression that underlie animal development. Using the early embryo of the fruitfly Drosophila melanogaster as a model, they are developing experimental and computational methods to systematically characterize and dissect the complex expression patterns and regulatory interactions already present prior to gastrulation.

Angela DePace received her PhD in Biochemistry from the University of California, San Francisco in 2002, where she worked with Jonathan Weissman on the molecular mechanism of yeast prion propagation. By measuring the growth of individual prion fibers she was able to demonstrate that a single protein can fold into multiple pathogenic conformations, each giving rise to different phenotypes, providing powerful evidence for the protein-only hypothesis. As a Helen Hay Whitney postdoctoral fellow, she worked with Michael Eisen at UC, Berkeley, and as part of the Berkeley Drosophila Transcription Network Project to apply 2-photon microscopy and image processing techniques to characterize the transcriptional network directing embryonic development of multiple species of Drosophila. She started her own lab in the Department of Systems Biology at Harvard Medical School in April 2008, where her group is broadly interested in the molecular mechanisms of gene regulation and how they shape evolution of regulatory networks.

Stanislav Shvartsman was born in Odessa (Ukraine) and received his undergraduate degree in physical chemistry from the Moscow State University in Russia. His graduate degrees are in chemical engineering from Technion and Princeton. After postdoctoral work at MIT, he opened his laboratory at the Lewis-Sigler Institute for Integrative Genomics at Princeton. The Shvartsman lab combines genetic, imaging, and computational approaches to study pattern formation and morphogenesis. The model system is Drosophila development and the main emphasis is on the direct connection between experiment and theory.

Antonio Iavarone is an associate professor at the Institute for Cancer Genetics and the Departments of Neurology and Pathology of Columbia University Medical Center, New York. He received an MD degree and Pediatric Residency from the Catholic University of Rome. He was a research fellow at the University of California at San Francisco and the Memorial Sloan Kettering Cancer Center, New York. In 1998, he joined the Faculty of Neurology and Developmental and Molecular Biology at the Albert Einstein College of Medicine, New York. He assumed his current position in 2002. His research has focused on delineating the role of Id2 and the retinoblastoma tumor-suppressor protein in development and pediatric cancer of the nervous system. His lab is collaborating with Andrea Califano's group at Columbia University on the identification of master regulatory factors in neural development and brain tumors.