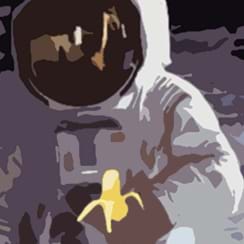 Presented by Science & the City, the Sackler Institute for Nutrition Science, and Astronomy on Tap

Space missions take scientists out of the lab into dangerous, accident-prone territory where a tiny margin of error determines success or failure. But other concerns, such as what to eat for dinner and how to eat it in zero gravity, are also important to those who venture into the final frontier. Scientists at NASA work to develop foods that are not only practical for space travel but also tasty and healthy. The first event of the Mis/Adventures in Science series, jointly presented on March 13, 2014, by Science & the City, the Sackler Institute for Nutrition Science, and Astronomy on Tap, offered an insider's perspective on some of the less discussed challenges of life in space. How to Make Eggs in Space featured moderator Dave Mosher, a projects editor at Popular Science, as well as panelists Charles Camarda, a senior advisor at the NASA Office of the Chief Engineer and former astronaut, and Sara Zwart, a senior scientist and deputy manager for nutritional biochemistry at NASA Johnson Space Center. The discussion featured topics from how to prevent bone loss in astronauts and plan food for a mission to Mars, to insights from space-based research that is helping us to better understand the human body and its needs here on Earth.

Mosher began by asking Camarda about "astronaut ice cream," which is marketed to children. Although developed for space, this freeze-dried ice cream turned out to be a poor space food because it is crumbly. Crumbs can float into astronauts' eyes and other unwanted places, so food choices include substitutes such as tortillas instead of bread. Camarda recalled enjoying chocolate-covered espresso beans (a substitute for coffee) and curried chicken in space. Many astronauts complain that food lacks flavor in space, so heavily spiced foods are common choices. Astronauts can taste test and select meals before missions, including choices from space programs in other countries such as Japan and Russia.

Astronauts often chose salty foods because of the perceived blandness of food in space. But this diet choice poses health risks. Bones lose density in space and become weaker without the need to withstand gravity. Zwart explained that excess dietary sodium can exacerbate bone loss, increasing the danger of breakage. The food lab tries to limit the sodium content in astronauts' meals, and although it has successfully reduced their daily intake to that in an average American diet, there is still room for improvement because most Americans consume too much sodium. Exercise can also mitigate bone loss in space, and Zwart reported a recent study showing that astronauts who used an exercise device called an ARED (Advanced Resistive Exercise Device) maintained bone density at pre-flight levels. "This is the first time in 50 years of flight we've seen that bone mineral density is being maintained," she noted, "which is pretty incredible."

When bones break down, compounds called collagen crosslinks are released into the blood and excreted in the urine. NASA monitors astronauts for bone loss through blood and urine samples, and Mosher inquired as to how these samples are collected in space, noting that it is difficult to work with liquids in zero gravity. Zwart replied that astronauts use devices containing chemicals that are used as volume markers so that smaller aliquots of liquids can be frozen and brought back to Earth later.

"We're signed up to be guinea pigs for life," Camarda joked as he explained how NASA studies former astronauts throughout their lives to understand how the body recovers from time in space. The agency's collection of urine samples—going back as far as the Apollo missions—is viewed by space nutrition researchers like Zwart as "gold for medical research." Most NASA research happens on Earth because spaceflight is so costly. To model space, researchers use ground analogues such as long-term bed rest, in which volunteers are kept in a 6 degree head-down tilt for 90 days and monitored for changes in bone density and other physiological characteristics. NASA also conducts research during Antarctic winters, which provide an environment similar to space in that people must be supplied with vitamin D to compensate for lack of sunlight. (In space, the sun's UV rays are intentionally blocked to prevent overexposure.)

Mosher next asked the panelists about how food could be prepared for longer missions that might send astronauts to an asteroid or to Mars. Zwart discussed the need to develop a system to stabilize food for up to five years while retaining its vitamin content. Space crafts are exposed to damaging cosmic radiation once outside Earth's atmosphere and NASA is working to determine the effect this exposure will have on food. In one study comparing food stored on Earth and the International Space Station (ISS), the duration of storage, not radiation exposure, had the greatest effect on food deterioration. Zwart also emphasized the importance of developing a "really good toilet" for travel to Mars—one that could process waste and reclaim valuable materials such as water. One example is the urine-processing assembly in operation on the ISS, which extracts potable water from urine. Another important planning aspect for Mars missions will be to ensure that astronauts onboard get along. Crew members must have compatible personalities and complementary skill sets, and their ability to work as a team will be especially important because it could take 20 to 40 minutes to receive troubleshooting advice from NASA. "It's almost like the psychological matchmaking is going to be just as important as the technology you're going to use to get there," Mosher observed.

Camarda and Zwart both underscored the applicability of NASA research to life on Earth. For example, studies on bone loss in space have informed research on the pathology and treatment of osteoporosis. Astronauts lose bone density at ten times the rate of an osteoporotic person, and the results of countermeasures such as diet and exercise are visible in as few as 4 to 6 months. NASA's work in Antarctica has also informed new Institute of Medicine guidelines for daily intake of vitamin D. In addition to its work in life sciences, NASA has developed technology with widespread uses, including satellites and deep sea drills, and has helped the U.S. to stay at the forefront of technological innovation. The panelists highlighted the need for people from all disciplines to contribute to the space program; NASA employs not only scientists and engineers but also accountants, lawyers, historians, writers, artists, and others. They also called attention to the importance of engaging the public and inspiring young minds.

In the question and answer session, audience members asked about the utility of simulated (artificial) gravity for mitigating bone loss in astronauts. Zwart described a ground analogue study that placed bed rest study participants in a large, slowly rotating centrifuge that induces a force on bones similar to gravity. A spin of 2.5 g for 1 hour per day for 21 days was not enough to maintain bone density in the study; however, it is possible that longer centrifugation times would successfully mimic gravity and prevent bone deterioration. In response to a question about waste management in space, Camarda explained that waste from the ISS is usually compacted and stored to be loaded on the next Progress spacecraft, an expendable Russian craft used to transport supplies unmanned. Waste is disconnected on the return journey and burned up in Earth's atmosphere. Camarda noted that research into closed-loop biospheres for long-duration spaceflight will spur the development of environmentally sustainable cities, another way in which NASA research benefits life on the ground. One audience member asked how eggs are made in space, and Zwart explained that like other foods eggs are cooked and dehydrated on Earth. In space, astronauts inject the packet with fluids and the eggs fluff up, ready to eat. And, according to Camarda, "They're not bad!"

Dave Mosher is a science and technology journalist and the projects editor at Popular Science. While reporting for outlets such as WIRED, Scientific American, Popular Mechanics, Discover, National Geographic News, the Discovery Channel, and Space.com, Mosher has watched humans and robots launch into space, toured defunct nuclear reactors, and flown over the North Pole to witness a total solar eclipse.

Charles Camarda began working at the NASA Langley Research Center (LaRC) after graduating from the Polytechnic Institute of Brooklyn. He later obtained an MS in mechanical engineering from George Washington University and a PhD in aerospace engineering from Virginia Polytechnic Institute. He headed the Thermal Structures Branch at LaRC before leading the structures and materials efforts of the National Aero-Space Plane (NASP) and the Single-Stage-to-Orbit Program. He was selected to be an astronaut in 1996 and flew on the return-to-flight mission of Space Shuttle following the Columbia accident (STS-114), in 2005. He became director of engineering at Johnson Space Center in 2005 and is now the senior advisor for innovation at NASA's Office of the Chief Engineer.

Sara R. Zwart is a senior scientist and deputy manager for nutritional biochemistry at NASA Johnson Space Center. She joined NASA in 2003 as a National Research Council postdoctoral fellow and became a research scientist in 2005. The Nutritional Biochemistry Laboratory is charged with defining the nutritional requirements for extended-duration spaceflight. Operational and research activities are being conducted to define the impact of spaceflight on human physiology and nutritional requirements. Zwart has been involved with research investigating relationships between nutrition and the physiological effects of spaceflight, including bone and muscle loss, changes in iron metabolism, and oxidative damage. Spaceflight studies include nutritional assessments during long-duration missions and dietary modification to mitigate bone loss associated with spaceflight. Ground-based research is used to understand the role of nutrition in ground-analog studies that simulate various aspects of space travel. This research includes rotating cell culture models, NASA Extreme Environment Mission Operations (NEEMO) undersea missions, extravehicular activity analogs at the Neutral Buoyancy Laboratory, and bed rest and Antarctic winter studies. Zwart earned her doctorate in nutritional sciences from the University of Florida.

Andrea Egizi is completing a PhD in ecology and evolution at Rutgers University. Her work examines the ecological and microevolutionary processes underlying the establishment and spread of invasive species, using a cold-adapted mosquito with recently established populations in warmer climates as a model. She is also interested in improving science literacy and fostering enthusiasm for scientific discovery among a broader audience.