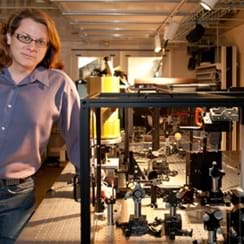 On April 12, 2011, Ben Oppenheimer, a comparative exoplanetary scientist, spoke to educators, students, and amateur astronomers at the New York Academy of Sciences about Inter-Galactic Biodiversity: Astrophysicists' Search for Habitable Planets. Oppenheimer's work often straddles the world of philosophy and science as he tackles the engineering and astrophysics of the search for habitable planets. He constantly grapples with the question "What if we actually find life on other planets?" as he engineers better ways to collect, analyze, and interpret the brightness of light as a function of wavelength, that is emitted or reflected by not too distant planets and their stars.

While Oppenheimer is an astrophysicist by training, his main area of study and the subject of his talk at the Academy offer something for teachers and students interested in the big questions of the universe—not only "Are we alone?", but also "What does a planet with life look like?" His work and his answers to these questions traverse the historical divisions between physics, biology, and engineering. In addition to describing the recent redefinition of planetary bodies in our solar system, he explained his use of adaptive optics (AO) to improve spectroscopy. The improvements to AO, which are technologies that decrease effects of wavefront distortion introduced when light travels through our inhomogeneous atmosphere, allow Oppenheimer a better, clearer picture of the radiating energy from planets and stars.

The combination of big, philosophical questions about the nature of the universe with a rich thought experiment about how life changes a planet makes Oppenheimer's work an enticing topic for educators. His talk not only highlights a new and exciting interdisciplinary science but also clearly outlines the process by which he and other scientists combine experimental design, philosophy, and engineering to conceive, test, and refine their ideas.

Ben Oppenheimer is a comparative exoplanetary scientist: he studies planets orbiting stars other than the Sun. This nascent field is so young that much of the work involves developing the techniques needed to see these planets, so that their light can be dissected and analyzed. His optics laboratory in the Rose Center is the birthplace of a number of new astronomical instruments designed to tackle this problem.

Oppenheimer also works on faint white dwarfs, the remnants of normal stars, and brown dwarfs, star-like objects that are too small to be stars but too large to be called planets. He is the co-discoverer of the first brown dwarf, called Gliese 229B, and was the first scientist to study the atmospheric composition, chemistry and physics of a sub-stellar object outside our solar system.

Oppenheimer has served on numerous national and international committees related to astronomical research, physics and the state of astrophysics. He is also an Adjunct Associate Professor of Astronomy at Columbia University. He received his BA in Physics from Columbia University and his PhD in Astronomy from the California Institute of Technology.