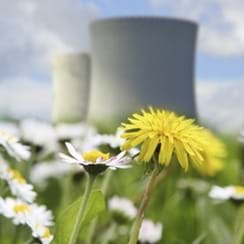 On January 20, 2011, the Green Science and Environmental Policy discussion group heard from three experts regarding the potential role of nuclear power generation as a low carbon energy alternative for New York State.

Jared Snyder outlined the State's climate planning process and how some of the elements of this process relate to nuclear power. The Climate Action Council, for which Snyder is the designated representative of the Department of Environmental Conservation, is governed by an Executive Order issued by Governor Paterson in 2009. The council was set up to make recommendations on how the state could reduce its greenhouse gas emissions by 80% from 1990 levels by the year 2050. The process began with a visioning exercise at the New York Academy of Sciences, and then the Brookhaven National Lab was commissioned to prepare an analytical report that identified the changes that would be necessary to achieve that vision. Next, over one hundred stakeholders were convened and assembled into technical working groups (TWGs), charged with turning the Brookhaven analysis into policy recommendations. In keeping with its mandate, the Council subsequently produced an interim report. Public comment for this report closed on February 7th, 2011, and the next step in the process will be a macro-economic cost-benefit analysis to determine the socio-economic feasibility of these recommendations for New York State.

The analysis by Brookhaven National Lab concluded that any scenario that achieved the "80 by 50" goal would require the scaling up of nuclear power. However, the Council’s Power Supply and Delivery Sector TWG preferred a focus on 'renewables' such as solar, supplemented by Carbon Capture and Storage (CCS) and nuclear power.

In order to assess the economic feasibility of the Brookhaven Lab's recommendations, policymakers need to understand the possible funding sources for a scale up of nuclear power. Gary Krellenstein called on his experience with investors and his familiarity with energy markets to provide a comprehensive analysis of the market in New York State. The thesis of his talk was that it is possible to find investors for nuclear power projects but that the lack of political interest means that these projects may not be the best use of financial and political resources in NYS. Krellenstein pointed out that investors are primarily concerned about increasing the level of certainty regarding their return on investment, especially for investment in hot button projects such as nuclear power generation. Factors such as low natural gas prices, New York's strong anti-nuclear sentiment, large capital requirements, high tax rates, high labor rates, and regulatory costs are major disincentives to investment. Furthermore, NYS may not see much demand growth for energy—due to emphasis on energy efficiency and demand side management as well as on other energy-use reduction strategies.

Despite the limited political interest at this stage, nuclear power may still prove to be a crucial part of reducing carbon emissions in the future. According to the Carbon Mitigation Initiative's "Stabilization Wedges" doubling global nuclear power capacity is equivalent to increasing solar power 700-fold. William Horak described current nuclear technologies and provided a detailed cataloging of those in the development pipeline. The criteria for Department of Energy investment in nuclear research programs are—safety, economics, non-proliferation aspects, fuel cycle, environmental impact, and enhancement of grid security. And each of the technologies in the pipeline emphasizes one or two of these criteria. Horak began by describing the current variety of energy sources in New York State, revealing that at this time 33% of power comes from nuclear power plants. Current nuclear plants in NYS are open-cycle, uranium-based Generation II plants producing 600MW & 1000MW of electricity. Six of them have been licensed to operate until 2020–2030, while the licenses for Indian Point 1 & 2 are currently under review. He explained that elimination of nuclear power from the mix of energy sources would require a significant scaling up of other sources.

George Hendrey is an ecologist and Distinguished Professor in the School of Earth and Environmental Science at Queens College and the Graduate Center of the City University of New York. He came to Queens College in 2004 following a long career at Brookhaven National Laboratory where he was Head of the Earth Systems Science Division. He is an author of 130 peer-reviewed publications and over 150 other contributions to science. With an MS in civil engineering and PhD in comparative limnology from the University of Washington, he has taken an engineering perspective into research in both aquatic and terrestrial ecosystems. His early career dealt with the effects of acid precipitation, and he designed experiments to manipulate the pH of both artificial and natural streams. He then became interested in the impact of increasing atmospheric CO2 on terrestrial ecosystems and was intrigued with the problem of controlling the concentration of CO2 in open-air experiments. He conceived and designed several large-scale CO2 manipulation experiments.

Horak has a BS in aeronautical and astronautical engineering and an MS and a PhD in nuclear engineering from the University of Illinois. He is an internationally recognized expert on energy issues and has served on numerous boards, committees, and panels, both in the U.S. and for international organizations, such as the European Bank for Reconstruction and Development.

Gary Krellenstein is an Investment Banker and Managing Director in JPMorgan's Energy and Environmental Group. He specializes in electric utilities, alternative energy technologies and project financing. Prior to rejoining Morgan in 2000, Krellenstein was the Director of Municipal Research, at First Albany Corporation. He has also worked as a utility analyst at Lehman Brothers, Merrill Lynch and Morgan Guaranty & Trust, and as a nuclear engineer and systems analyst for the Envirosphere Company, the U.S. Department of Energy and the U.S. Nuclear Regulatory Commission.

Krellenstein holds advanced degrees in Nuclear Engineering, Computer Science, and an MBA. He is the former chairman of The Bond Marketing Association's (now SIFMA) Credit Committee and the NFMA's "Best Practices" committee for utilities and also sat on the Advisory Committee for Public Utilities Fortnightly magazine. Krellenstein is a member of the Institute of Electrical and Electronics Engineers, the American Nuclear Society, the Natural Resource Defense Council (NRDC), the IEEE Power Engineering Society, the NYC Partnership Energy Task Force, and the American Association for the Advancement of Science. He currently serves on the Board of Directors of the Climate Response Fund, an NGO which focuses on technologies to address global warming.

Jared Snyder is Assistant Commissioner for Air Resources, Climate Change & Energy at the New York State Department of Environmental Conservation. In that capacity, he oversees New York's development and implementation of clean air programs and programs to reduce greenhouse gas emissions, including the Regional Greenhouse Gas Initiative. He has served as the DEC designee on the New York Climate Action Council and the New York Energy Planning Board.

Prior to joining DEC in 2007, he served as Chief of the Affirmative Litigation Section of the Environmental Protection Bureau for the State Office of the Attorney General for the past 12 years. In that position, he handled numerous climate change and clean air lawsuits for the State of New York.

From 1990–1995, he worked at the U.S. Department of Justice as the lead attorney for enforcement in the areas of air pollution, water pollution, and hazardous waste. Prior to his federal service, Snyder worked in private firms in New York and Los Angeles. Snyder graduated with a BA in economics from Cornell University and a JD from Harvard Law School.