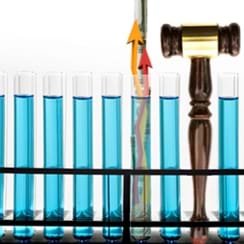 Look Before You Leap: Careers for Scientists in Business and Law

For science PhDs in search of career alternatives, the business and legal fields can be attractive options. Many PhDs find their abilities in communication and analytical thinking are readily transferable, and positions in these fields are almost always more financially rewarding than research. In addition, they are often better suited to certain personalities and work styles.

So, who are employers in the business and legal world seeking, and how do scientists get noticed? A May 27, 2007, event presented by the Science Alliance for Students and Postdocs featured a panel of professionals from a range of fields, including management consulting, venture capitalism, equity research, quantitative analysis, and patent law. They offered insights into career options open to science PhDs, and advice on how to break into the field you're interested in.

Use the tabs to find a meeting report on this event.

Jessica Blumstein is a manager in the life sciences practice of Capgemini, where she provides consulting services to life sciences companies. Her experience in management consulting has focused on strategic planning, operational decision-making, and therapeutic area and product-specific support. Prior to consulting with Capgemini, Blumstein helped build several startups, ranging from her own biotechnology company to a life sciences advisory services company.Her graduate research was conducted in the Department of Cell Biology at the University of California, San Francisco. The focus of her thesis was the characterization of a neuronal adaptor protein complex determined to be required for synaptic vesicle formation from endosomes. Her undergraduate research was performed at the Carnegie Institution of Washington on the campus of the Johns Hopkins University, where she received a BA in biology.

Jose Haresco is a senior vice-president within the Healthcare Equity Research Group of Merriman Curhan Ford & Co., a San Francisco-based boutique brokerage firm specializing in high-growth equity sectors. He currently focuses on small-cap biotechnology and medical device companies in the aesthetics, cardiovascular, and orthopedics sectors. Prior to joining the firm in 2005, Jose worked in the healthare investment banking group of C.E. Unterberg, Towbin, where he focused on financing and mergers & acquisitions across various healthcare verticals. Haresco earned his PhD from the University of California, San Fransisco in 2002 from the lab of Tack Kuntz.

Russell Hirsch is a Managing Director of Prospect Venture Partners. He cofounded Prospect Venture Partners II and III as dedicated life science funds with over $1 billion in capital under management. Earlier, he was a member of the Health Care Technology Group at Mayfield, where he served as a venture partner from 1993 to 1994 and as a general partner from 1995-2000, playing a key role in Mayfield's investment activities in the biotechnology and medical device sectors. Hirsch serves or has served on the board of directors of many publicly and privately held companies. He is vice chairman of the board of directors of Interplast and is on the genetics advisory council of the Harvard Medical School-Partners Healthcare Center for Genetics and Genomics.

Lila Hope is an associate in the life sciences practice group at Cooley Godward Kronish and a member of its business department. She joined the firm in 2002 and is a resident in the Palo Alto office. Her practice focuses on the representation of technology companies, primarily in the life sciences industry. Hope graduated with a JD magna cum laude in 2002 from Duke University School of Law, where she was elected to Order of the Coif. And was awarded the Class of 1968 Scholarship. She earned her PhD in cancer biology from Stanford University School of Medicine in 1999. As a Stanford Markey Predoctoral Fellow, she characterized a novel tumor susceptibility gene, including its cell cycle-dependent localization, its effects on genome stability and receptor-mediated endocytosis, and its interaction with other gene products. Prior to entering Stanford, she graduated with an MS from the Oregon Graduate Institute in 1993, and received her undergraduate education at the University of San Francisco and the University of Science and Technology of China. Hope is a member of the State Bar of California and the American Bar Association.

Michael Leventon is a quantitative analyst at D. E. Shaw & Co. where he uses mathematical techniques to analyze problems relevant to trading in the financial markets. Prior to D. E. Shaw & Co., Dr. Leventon was vice president of research and development at MD OnLine, Inc. The company developed a medical image search engine for use as a diagnostic aid for radiologists.

Leventon received his PhD in electrical engineering and computer science at MIT, where his research focused on incorporating statistical models into computer vision and medical imaging problems. In a collaboration between MIT and Brigham and Women's Hospital, he designed and implemented a surgical navigation system used to guide the chief of neurosurgery through hundreds of intra-operative procedures. The system allows the surgeon to navigate through the patient's head more safely and accurately by referring to a preoperative scan.

Prior to joining Darby & Darby, Sakai worked at another intellectual property law firm in New York City, where he gained litigation experience. He also spent time as a summer research assistant at Columbia Law School under Jack Greenberg, a recipient of the Presidential Citizens Medal from former President Bill Clinton for his contributions to civil rights. Prior to attending Columbia, Sakai was a postdoctoral researcher at Princeton University, where he carried out theoretical and computer-simulation research on disordered heterogeneous materials, liquids, and amorphous solids.

For his dissertation work at UCLA, Sakai conducted studies on adapting Fourier transformation for the purpose of extracting information on correlation lengths of non-crystalline macroscopic systems that are only modestly ordered. For his bachelor's thesis work at the University of Tokyo, he was engaged in the syntheses of organic compounds in which a thermodynamically unstable group such as a nitrogen radical is kinetically stabilized by means of steric protection.

Arthur Tinkelenberg is a venture capitalist with Ascent Biomedical Ventures. Previously, he worked in the Healthcare Investment Banking and Mergers and Acquisitions Groups at Robertson Stephens, where he advised clients on strategic and financing alternatives, and participated in over $250 million in public, private, and merger transactions for biotechnology, medical device, and diagnostics companies. He currently serves on the board of directors of Crosstrees Medical and is a board observer for Azevan Pharmaceuticals and Metronome Therapeutics.

Tinkelenberg conducted research in lipid metabolism, genomics, biochemistry, and cell biology as a research scientist at Columbia University, and is an inventor on a number of issued and pending patent applications. He earned his PhD in molecular genetics from the Rockefeller University, where he studied cell growth regulation and signal transduction as a Rockefeller and National Science Foundation Fellow. He earned his BA in biology (with honors) from Grinnell College.

Fabrice Vincent is a partner at Lieff Cabraser Heimann & Bernstein, LLP. He graduated from the University of California, Berkeley in 1989, and then attended Cornell Law School, where he received his JD in 1992, graduating cum laude. He was admitted to practice law in the State of California in 1992. In 2006, he was named a "Northern California Super Lawyer," by Law & Politics. The objective of the Super Lawyers selection process is to create a credible, comprehensive, and diverse listing of outstanding attorneys that can be used as a resource to assist attorneys and consumers in the search for legal counsel. Vincent is a member of the State Bar of California, the Bar Association of San Francisco, the American Bar Association, the Association of Trial Lawyers of America, and the Association of Business Trial Lawyers.

Adelle Caravanos is a freelance science writer based in Queens, New York.

Alison Wallace, PhD was a postdoctoral fellow at Columbia University studying the molecular mechanisms of smoke-induced lung disease. Alison has recently returned to her hometown, Vancouver, to pursue a MD degree at the University of British Columbia.

Percy Luu, PhD is a postdoctoral fellow in the Department of Psychiatry and Behavioral Sciences at Stanford University. When he is not busy scrutinizing his own psychiatry and behavior, he studies the synaptic physiology of motivation and reward.

Michele Caton, PhD, is a postdoctoral fellow in immunology at Columbia University Medical Center, where she explores the genetics of dendritic cells. Michele also enjoys writing about science and playing the guitar in her free time.