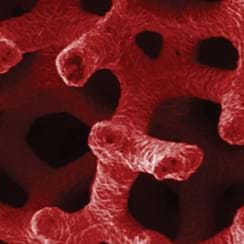 In recent years, diversity has been touted as an essential property of schools, companies, government, and other human endeavors. It is also important in the chemical world, because increasing the diversity of available chemical compounds improves our ability to discover biologically active molecules that can be used as drugs or research tools.

On February 26, 2009, researchers came together at the Academy to hear presentations on the creation and uses of chemical diversity. John Porco's group combines a high-throughput, combinatorial, parallel approach to the investigation of chemical reactions with intensive study of the reaction mechanisms and intermediates that result in interesting new compounds. R. Kiplin Guy narrated his decade-long quest to design new compounds that can be used to study the physiological roles of the thyroid hormone receptors. Daniel Erlanson provided an overview of a relatively new approach to generating chemical diversity, known as fragment-based ligand discovery.

Before joining Sunesis, Erlanson was an NIH postdoctoral fellow with James A. Wells at Genentech. He earned his PhD in chemistry from Harvard University in the laboratory of Gregory L. Verdine and his BA in chemistry from Carleton College in Northfield, Minnesota. Erlanson is an inventor on more than a dozen issued patents and published patent applications as well as an author of more than two dozen scientific publications.

R. Kiplin Guy is currently chairman and member of the Department of Chemical Biology and Therapeutics at St. Jude Children's Research Hospital (SJCRH), Memphis, Tennessee. In 1996, Guy received his PhD in organic chemistry from the Scripps Research Institute (TSRI) La Jolla, CA. He also carried out additional training in physiology at the Woods Hole Research Institute during this period. From 1996 to 1998, he did a postdoctoral fellowship in cellular biology with Michael Brown and Joseph Goldstein at the University of Texas Southwestern Medical Center, Dallas, TX.

Guy has held academic positions at UCSF (assistant to full professor, currently adjunct professor), St. Jude Children's Research Hospital (member and chair), and Vanderbilt University (adjunct professor). His research is focused on the discovery and development of novel small molecules that target the pathophysiology of orphan pediatric diseases, particularly pediatric oncology and protozoal infectious diseases. Most of his group's work falls into the categories of chemical validation of novel targets, lead discovery and optimization of novel chemical matter for validated disease targets, and use of non-targeted whole-cell strategies for lead discovery and optimization. He is the author of 89 papers and book chapters, and the inventor on 9 issued patents.

John Porco is professor of chemistry at Boston University and director of the Center for Chemical Methodology and Library Development at Boston University (CMLD-BU). He obtained his BA degree in 1985 from the College of the Holy Cross. He then moved to Yale (1986–1989) and Harvard University (1989–1992) where he earned his PhD under the direction of Stuart L. Schreiber. He worked on syntheses of the enediyne antibiotics. Porco was an NSF postdoctoral fellow with Chi Huey Wong at the Scripps Research Institute (1992–1994) where he studied carbohydrate chemistry. After his postdoctoral studies, Porco went on to work in venture capital (Avalon Ventures, La Jolla, CA) and industry as director of chemistry at Argonaut Technologies, which he co-founded in 1995.

Porco joined the Department of Chemistry at Boston University in 1999 as assistant professor and was promoted to professor in September 2004. In 2002, he successfully led an effort to establish the CMLD-BU. Funded by the National Institutes of Health (NIH) as a Center of Excellence, the focus of the CMLD-BU is the discovery of new methodologies to produce novel chemotypes and derived chemical libraries of unprecedented complexity for biological screening. In addition to multiple grants from the NIH, in 2001 Porco received the American Cancer Society Research Scholar Award for "Studies Towards the Synthesis of Torreyanic Acid and Related Epoxyquinoids" and, in 2003, the Bristol-Myers Squibb Unrestricted Grant in Synthetic Organic Chemistry. In 2009, Porco will receive the Arthur C. Cope Scholar Award from the American Chemical Society. Since beginning his research program at Boston University in 1999, he and his colleagues have published over 70 manuscripts in peer-reviewed journals and presented over 95 invited seminars at universities, pharmaceutical companies, and conferences.