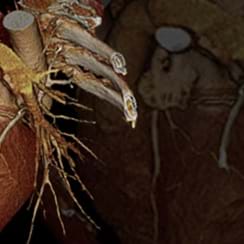 Coronary heart disease resulting from atherosclerosis, the buildup of complex plaques composed of fatty and fibrous material in artery walls, is the number one cause of death among Americans. The buildup commences as early as childhood or adolescence, and after years of growth, the plaques can rupture and block blood flow to the heart, brain, legs, or other parts of the body. Often, a heart attack or stroke is the first indication that a person suffers from atherosclerosis.

Atherosclerosis can be managed via lifestyle changes or statin drugs, which inhibit cholesterol synthesis and upregulate LDL receptors in the liver. However, researchers would like to improve upon current treatments using new strategies, such as raising good cholesterol (HDL) levels and blocking the inflammatory response. Possible approaches discussed at an April 22, 2008, meeting at the Academy include leukotriene inhibition, promotion of peroxisome proliferator-activated receptor (PPAR) agonists, and blocking the action of the peptide hormone angiotensin II.

American Heart Association
Provides information about how to prevent and treat heart disease.

CV Therapeutics
A biopharmaceutical company primarily focused on the discovery, development and commercialization of new small molecule drugs for the treatment of cardiovascular diseases.

Lipids Online
An educational resource that provides information about cholesterol and atherosclerosis.

Colin Funk is a professor in the Departments of Physiology and Biochemistry in the Faculty of Health Sciences at Queen's University in Kingston, Ontario. He is also serving as the Canada Research Chair in Molecular, Cellular, and Physiological Medicine and career investigator of the Heart and Stroke Foundation of Canada until 2011. Prior to his position at Queen's University, Funk was an associate professor in the Department of Pharmacology at Vanderbilt University in Nashville and as a professor of Pharmacology at the University of Pennyslvania School of Medicine.

Funk received his PhD in experimental medicine from McGill University in Montreal. He was a postdoctoral fellow in the laboratory of Bengt Samuelsson in the Department of Physiological Chemistry at the Karolinksa Institutet in Stockholm.

Born in Liverpool, England, Alan Daugherty's educational training is in pharmacology. He earned a bachelor's degree from Sunderland Polytechnic, and post-doctorate and doctor of science degrees from University of Bath.

He serves as principal investigator on numerous NIH-funded research initiatives, as well as sponsor and co-investigator on many NIH- and American Heart Association-funded projects. Daugherty's research concentrates on the role of angiotensin peptides in the development of atherosclerosis and abdominal aortic aneurysms. His funded research initiatives currently total more than $28 million.

Daugherty provides volunteer-service to the American Heart Association, serving in numerous capacities including chair of the Arteriosclerosis, Thrombosis and Vascular Biology Council; the American Diabetes Association, and the International Atherosclerosis Society.

Richard Lawn received his BA in astronomy from Harvard College in 1969 and his PhD in molecular, cellular, and developmental biology from the University of Colorado in 1977. Lawn is considered one of the pioneers in the field of cloning and expressing human genes. As a postdoctoral fellow in the laboratory of Tom Maniatis at CalTech, he constructed the first human genomic DNA clone library and characterized the human beta globin gene locus, the first human genes so isolated.

Lawn has served as senior scientist and staff scientist at Genentech, Inc., from 1980–1990, as professor of medicine at Stanford from 1990–1998 and as vice president, discovery research at CV Therapeutics, Inc. from 1998 to the present.

He has cloned a number of genes involved in coagulation and heart disease, including the globin genes, serum albumin, anti-thrombin III, tissue factor, lipoprotein lipase, lecithin cholesterol acyl transferase, cholesteryl ester transfer protein, apolipoprotein(a) and anti-hemophilia factor VIII. Subsequent to his role in identifying ABCA1 as the defective gene in Tangier disease, he has been seeking to discover a therapeutic approach to increase reverse cholesterol transport and HDL cholesterol to reduce cardiovascular disease.

Lawn received the Dr. Murray Thelin Award in 1989 and the Distinguished Inventor Award from the Intellectual Property Owner's Association in 1999 for his role in the development of recombinant factor VIII.

Rajendra Tangirala is an assistant professor of medicine at the David Geffen School of Medicine at the University of California, Los Angeles. He is also director of the Mouse Phenotyping Core and co-director of the Inflammation Core at the UCLA/UCSD Diabetes Endocrinology Research Center.

Tangirala received his PhD from the Medical College of Pennsylvania and was a postdoctoral fellow at the University of California, San Diego School of Medicine and the University of Pennsylania Medical Center. Prior to his position at UCLA, Tangirala was on the research faculty in the Departments of Cardiovascular Medicine and Experimental Therapeutics from 1997–2000. From 2000–2003 he was a leader and research scientist II at X-Ceptor Therapeutics, Inc., in San Diego, CA.

Tangirala is the recipient of numerous honors and awards including the International Atherosclerosis Society's Young Investigator Award for Scientific Excellence and the Scientist Development Award from the American Heart Association.

Catherine Zandonella is a science writer based in New York City, covering such topics as environmental science, public health, and applied technology. She has a master's degree in public health from the University of California, Berkeley. Zandonella has written for a number of publications, including New Scientist, The Scientist, and Nature.