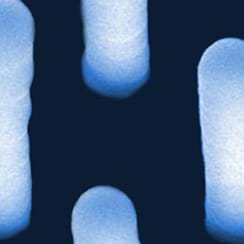 On May 18, 2007, leading experts in nanoscale electronics presented their latest work at a symposium held at the Academy. Mark Ratner of Northwestern University discussed the current state of molecular electronics theory, and some of the cutting-edge experiments that are already testing it. Latha Venkataraman of Columbia University and Mark Hybertsen of Brookhaven National Laboratories presented a new automated strategy that can test thousands of nanoscale connections a day, and a promising new way to improve these circuits.

Paul McEuen of Cornell University provided an overview of his work on several types of nanoscale electrical and mechanical devices, most of which are built with carbon nanotubes and nanoscale graphene sheets. Colin Nuckolls of Columbia University discussed his group's efforts to connect molecular wires to silicon circuits, a major hurdle that nanoelectronics will need to clear for most practical applications.

Nanoscale Science and Engineering Center
Founded in 2001, the NSEC is a program at Columbia University affiliated with the National Science Foundation Center for Electron Transport in Molecular Nanostructures. Its mission is to understand and manipulate the transport of electrons through molecules and molecular assemblies on a nanometer scale. Additional information about Latha Venkataraman and Mark Hybertsen is available here. Also visit its downloads page for additional background information, and their links page to learn more about other institutions affiliated with the NSEC.

McEuen Group
The Laboratory of Atomic and Solid State Physics at Cornell University.

The Nuckolls Laboratory
More information about efforts to design and understand the properties of self-assembling molecular devices.

Widely recognized as a pioneer in molecular electronics, Mark Ratner first proposed using organic molecules as circuit components more than 30 years ago. Trained as a chemist at Harvard University and Northwestern University, he is now a professor of chemistry at Northwestern.

Ratner is a Fellow of the American Academy for the Advancement of Science and a member of the American Academy of Arts and Sciences, the National Academy of Science, and the International Academy of Quantum Molecular Science. He has also received the Feynman Award in Nanotechnology, the Langmuir Award from the American Chemical Society, and many other awards and honors. The author of numerous publications in several fields, Ratner currently focuses on theoretical and experimental models of electron transfer, molecular electronics, and biomolecule binding.

Latha Venkataraman is a research scientist affiliated with the Columbia University Nanoscale Science and Engineering Center, and recently accepted a position as an assistant professor in Columbia's Applied Physics and Applied Mathematics Department. She completed her PhD at the Massachusetts Institute of Technology.

Until early 2007, Mark Hybertsen was a senior research scientist in the Department of Applied Physics and Applied Mathematics and with the Center for Electron Conduction in Molecular Nanostructures at Columbia University. He recently moved to Brookhaven National Laboratories, but he continues to work closely with his colleagues at Columbia.

Hybertsen holds a PhD in Physics from the University of California, Berkeley, where he studied exchange and correlation in semiconductors and insulators. Hybertsen joined Bell Laboratories as a postdoctoral member of the technical staff in 1986. After finishing his postdoctoral work, he remained a member of the technical staff from 1988 to 1997, conducting a variety of research projects in the theory of the electronic properties of materials From 1997 to 2001, Hybertsen supervised the Device and Materials Physics Group in the Semiconductor Photonics Research Department, first at Bell Laboratories and then as a part of Agere Systems (formerly the microelectronics business of Lucent Technologies). He continued as a consulting member of the technical staff with Agere Systems through 2002.

Paul McEuen describes his principal research interest as "anything, as long as it's small." Currently, that encompasses a range of molecular-scale electronic devices, including circuit components, nanomechanical systems, and even musical instruments made from both nanotubes and graphene sheets.

McEuen received his bachelor's degree in engineering physics from the University of Oklahoma in 1985, then moved to Yale University for doctoral work in applied physics. After a postdoctoral stint at the Massachusetts Institute of Technology, he joined the faculty at the University of California, Berkeley. In 2001, he moved to Cornell, where he is now a professor of physics.

The author of numerous research publications, McEuen is also the recipient of multiple professional awards, including the Office of Naval Research Young Investigator Award, Fellowships from the Alfred P. Sloan Foundation, and the Packard Foundation, and the Lawrence Berkeley National Laboratory Outstanding Performance Award.

Nuckolls received his bachelor's degree in chemistry at the University of Texas in Austin before going to Columbia for his PhD. After postdoctoral work at the Scripps Research Institute, he returned to Columbia, where he is now an assistant professor of organic chemistry. Nuckolls now works on building interfaces between silicon-based circuits and molecular electronic components, and is studying new strategies for synthesizing carbon nanotubes.