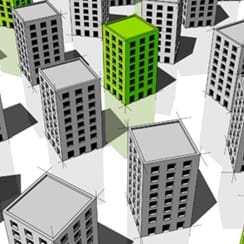 Net-Zero Energy Buildings: Moving From Demonstration Projects to the Mainstream

Since the completion of the Lewis Center at Oberlin College in 1999, which at 13,000 square feet (sf) was at that time the largest net-zero energy building (nZEB) in the country, the green building community has been conceptualizing and developing strategies to scale up nZEBs and to make them more commonplace within the industry. Nonetheless energy neutral buildings are still rare, and those that do exist are typically low-intensity use buildings under 15,000 sf. On January 25th, 2011, three speakers at Net-Zero Energy Buildings: Moving From Demonstration Projects to the Mainstream presented inspiring projects that are achieving new levels of sustainability in a challenging marketplace. They provided expert insights into metrics of success, best practices, trends, and prospects in the realm of low / net-zero energy building development.

Paul Torcellini, a commercial buildings researcher at the National Renewable Energy Laboratory (NREL), presented a follow-up to the research he presented at a previous panel discussion at the New York Academy of Sciences on commercial, net-zero energy buildings Zero Net Energy Buildings: Reality or Fiction. During his presentation he switched his perspective from that of researcher to that of building owner and outlined how, by setting sustainability targets and committing to them, owners can ensure the success of an ambitious green building project. Torcellini began by describing the goals and vision that guided the design of the NREL–RSF (NREL–Research Support Facility) building. He pointed out the long-term impact of energy decisions made for buildings and provided the example of the New York City skyline—which represents centuries of energy decisions that continue to have an impact today.

As a highly motivated owner NREL preferred the design-build bid that would meet as many goals as possible from NREL's list of priorities. The energy goals held particular significance. According to Torcellini, the success of the NREL–RSF design-build process was that it provided performance-based guidelines rather than design solutions—thus allowing the design-build contractors to be creative and develop their designs within the performance guidelines. The resulting building, which represents a great step forward in the net-zero energy realm, was constructed with the budget typical for a regular office building. Notably, most of that budget was spent on design and modeling rather than on construction.

The value of a front-loaded design process of this sort was echoed by Philip Macey who leads Haselden Construction's sustainable building division. Macey framed his presentation as a reflection not only on the collaboration between the people involved in the lab project but also on the interaction between architecture and the environment. The design form and function was modeled to meet the energy goal. This required designing the building's components for synergistic roles and multiple uses, and Macey explained that designing with a 'multi-purpose' concept for a building's elements was not new: architects have been applying the same idea to work within space constraints, but the difference this time was that the constraint was an unequivocal and precise energy savings goal. Macey emphasized that a performance-based design-build process requires an innovative contract to match this innovative process.

Macey articulated that being goal-oriented at the beginning of the project was crucial to maintaining control, achieving those goals, and reaching project completion within budget. Most buildings reach for sustainability too late in the process, which results in an amplification of the costs. Reducing the cost of green building will require energy goals to be prioritized at the outset of the design and construction process. Taking this principle one step further, Macey advocated investment in new net-zero energy construction because he views them as a new real estate asset class. He proposed that the discussion should include a conversation about investing in green buildings as assets that produce returns on initial investment rather than just as means to achieve environmental sustainability goals.

Bert Gregory, Chairman and CEO of Mithun, expanded the discussion beyond individual buildings to neighborhoods. Collections of buildings can offer benefits unavailable to single buildings. For instance, integrating water systems is better achieved at the district scale. Gregory imparted the lesson that every neighborhood is unique and that the strategies to meet sustainability performance goals will therefore differ from one area to the next.

He outlined several sustainable urban design projects where the stated goals varied from carbon neutrality, to water neutrality, and, in the case of the Lloyd Crossing project, to having a neighborhood that has an environmental footprint equivalent to that of a native Northwest forest by 2050. Mithun's Lloyd Crossing project aims to transform the Lloyd district study area, a 35 block area in Portland, Oregon, into an environmentally and financially sustainable community. In all his examples, the goals and performance metrics were stated at the outset and were followed by the development of strategies to achieve these goals within various constraints such as zoning regulations, electricity demand reduction capabilities, renewable energy generation capacity, resource recovery, governance models, financing, and perhaps most importantly human behavior. According to Gregory, when it comes to achieving the energy saving goals of demand-side management initiatives, human behavior is the "final frontier."

Chris Garvin is an accomplished practitioner and active voice in the sustainable design community. His interests include high-performance design at both the building and community scale, zero energy communities, biomimicry, and water conservation. Garvin serves as a project lead for many of Terrapin Bright Green's consulting engagements while also managing projects for Cook + Fox Architects where he is a Senior Associate. Complementing his work at Terrapin, Garvin lectures on sustainable design and has taught at the Pratt Institute's Center for Professional Practice since 2002. He also advises several organizations on sustainability issues, including the National Building Museum. Garvin is a member of the New York Academy of Sciences's Green Building steering committee and serves on the Board of Directors for the U.S. Green Building Council - New York Chapter and on the Advisory Board for Mayor Michael Bloomberg's Office of Long-term planning and sustainability.

Philip Macey leads Haselden Construction's division dedicated to the expert construction of highly sustainable and low energy use development and facilities. Haselden is a Colorado-based construction company with over 30 years of experience in complex facility construction, including extensive history in leading edge project delivery methods, including performance based design-build and firm-fixed price contracts. Haselden has developed a Collaborative Delivery process that centers on an integrated approach that views the whole project delivery as precious resources. Under Macey's leadership those resources are evaluated, protected and managed by a wide range of design and construction participants, all in support of high performance facility construction and sustainable outcomes delivering long term performance to the Client Team.

As a licensed architect with over 20 years of specialized expertise in the design of laboratory and biotechnology facilities Macey has led teams in the creation of challenging projects from corporate headquarters to clean rooms for genomic research. These experiences have provided a keen insight into the demands of advanced buildings including the integration of architecture and energy management, raw land development, and the requirements of Safe Design. Macey has also been recognized for his leadership in successfully directing diverse client, design and construction teams in the creation of leading-edge facilities.

Paul Torcellini is the Principal Group Manager for Commercial Buildings Research at the National Renewable Energy Laboratory in Golden, Colorado. The laboratory is one of the National Laboratories for the U.S. Department of Energy. Torcellini leads the Commercial Building's Research Efforts. This effort is dedicated to making a substantial energy reduction in the commercial building. One of the focus areas is developing design methods such that energy features are integral to the building. This work not only includes passive solar design, but also includes daylighting strategies, control strategies, and HVAC design. Torcellini has been with NREL for 16 years. He holds a Master's degree and PhD from Purdue University specializing in passive solar design and control of commercial buildings. He is also a registered Professional Engineer.