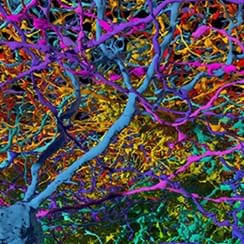 The brain is a puzzle of remarkable genetic, structural, and functional complexity. Projects that aim to map the brain and define its circuitry are complemented by advances in our understanding of how development and experience shape the connectivity underlying its functions. On March 22, 2016, the Academy's Biochemical Pharmacology Discussion Group presented Neuronal Connectivity in Brain Function and Disease: Novel Mechanisms and Therapeutic Targets to explore both the importance of structural synaptic plasticity in shaping neuronal connections and the technical advances that enable functional analysis of the brain's ultrastructure and circuitry. Mapping brain circuitry and its relationship to behavior elucidates the formation of thoughts and emotions as functional outputs of brain connectivity. As biomedical and computational technologies expand, so too does research on neuronal connectivity, promising unprecedented insights into the brain and its disorders and new options for diagnosis and therapy.

EyeWire: Explore
Play EyeWire to map the 3D structure of neurons and contribute to crowdsourced scientific discovery from the Seung Lab.

Thomas F. Franke is an associate professor of psychiatry and biochemistry & molecular pharmacology at the NYU School of Medicine. Franke received an MD from the University of Lübeck in Germany and an MD, PhD in medical virology from Justus Liebig University in Germany. Franke's research focuses on Akt signal transduction. He was the first to demonstrate the regulation of Akt by growth factors downstream of activated PI 3-kinase. His current work investigates the relevance of Akt in behavioral neuroscience by exploring the biochemical and structural consequences of Akt activity in higher-order neural functions. Building on his previous research on Akt dysfunction in cancer biology, Franke uses pharmacology and mutant mouse models to examine the involvement of Akt in mental disorders, including addiction and depression. This work will elucidate how Akt contributes to normal brain physiology and create new opportunities for diagnostic and therapeutic approaches to psychiatric and neurodegenerative disorders.

Eric Nestler is the Nash Family Professor of Neuroscience at the Icahn School of Medicine at Mount Sinai, where he serves as chair of the Department of Neuroscience and director of the Friedman Brain Institute. He received PhD and MD degrees at Yale University, where he also completed psychiatry residency training. He served on the Yale faculty until 2000 as the Elizabeth Mears and House Jameson Professor of Psychiatry and Neurobiology and director of the Division of Molecular Psychiatry. He then served as the Lou and Ellen McGinley Distinguished Professor and chair of the Department of Psychiatry at the University of Texas Southwestern Medical Center before moving to Mount Sinai in 2008. Nestler is a member of the Institute of Medicine and a fellow of the American Academy of Arts and Sciences. He is a past president of the American College of Neuropsychopharmacology and president-elect of the Society for Neuroscience. Nestler's research aims to better understand the molecular mechanisms of addiction and depression, using information from animal models to develop treatments.

Wenbiao Gan is a professor in the Department of Neuroscience and Physiology and the Skirball Institute at New York University School of Medicine. He obtained his PhD in neurobiology from Columbia University. Gan's research focuses on understanding how the brain integrates new information continuously while stably maintaining previously stored memories. Using transcranial two-photon microscopy to study changes in postsynaptic dendritic spines in living mouse cerebral cortex, his laboratory has shown that the majority of dendritic spines in diverse regions of the cortex persist throughout adulthood and can serve as a structural basis for long-term information storage. His laboratory has contributed to the understanding of how motor learning, fear learning and extinction, stress hormone glucocorticoids, microglia, and sleep affect synaptic plasticity in the living mouse cortex. Recently, the group has developed behavioral paradigms to image the activity of dendrites and dendritic spines in the cortex of awake behaving mice and has identified a fundamental role of dendritic calcium spikes in learning-dependent synaptic plasticity.

Bruce S. McEwen holds a PhD in cell biology from the Rockefeller University. He is a member of the National Academy of Sciences, the National Academy of Medicine, and the American Academy of Arts and Sciences, and past president of the Society for Neuroscience. A neuroscientist and neuroendocrinologist, McEwen studies environmentally regulated, variable gene expression in the brain, focusing on sex differences and the actions of sex and stress hormones on the adult brain, particularly related to structural and functional plasticity via epigenetic mechanisms. His laboratory's discovery of adrenal steroid receptors in the hippocampus in 1968 was the gateway for discovering the effects of circulating hormones on cognitive function, mood regulation, and other CNS functions. His laboratory combines molecular, anatomical, pharmacological, physiological, and behavioral methodologies and relates its findings to human clinical information.

Amy Robinson is executive director of EyeWire, a game to map the brain that began at Massachusetts Institute of Technology. EyeWire crowdsources neuroscience, challenging players around the world to solve 3D puzzles that map out neurons. Robinson has advised the White House Office of Science and Technology Policy and the U.S. Senate on crowdsourcing and open innovation. EyeWire's neuroscience visualizations have appeared at TED conferences and at New York City's Times Square. Robinson helped create the first neuroscience virtual reality experience. She curates the National Institutes of Health 3D Print Exchange Neuroscience collection, which features several 3D printable neurons discovered by EyeWire gamers. Fast Company credits Robinson with "making neuroscience into a playground for the hot tech du jour." Robinson has written for the BBC,Vice, Nature, and Forbes, and tweets @amyleerobinson. She founded the TEDx Music Project, a collection of the best live music from TEDx events around the world. She was named to the Forbes "30 Under 30" list in 2015.

Bernardo Sabatini obtained a PhD in neurobiology and an MD from the Harvard/Massachusetts Institute of Technology Program in Health Sciences and Technology. He completed a postdoctoral fellowship at Cold Spring Harbor Laboratory and then joined the faculty in the Department of Neurobiology at Harvard Medical School, where he is now the Alice and Rodman W. Moorhead III Professor of Neurobiology. In 2008 Sabatini was named an investigator of the Howard Hughes Medical Institute, and in 2010, the Takeda Professor of Neurobiology at Harvard Medical School. His laboratory researches the mechanisms of synapse and circuit plasticity that permit new behaviors to be learned and refined, creating optical and chemical methods to observe and manipulate the biochemical signaling associated with synapse function. In 2014 Sabatini was elected to the American Academy of Arts and Sciences. He is the recipient of the 2013–2014 A. Clifford Barger Excellence in Mentoring Award and serves on scientific advisory boards for the Simons Center for the Global Brain, the Max Planck Florida Institute, and other organizations.

David Sulzer is a professor of neurology, psychiatry, and pharmacology at Columbia University Medical Center and the New York Psychiatric Institute. He received his PhD in biology from Columbia University. His lab investigates the function and alteration of the synapses of the cortex and the basal ganglia, including the dopamine system, in normal behaviors such as habit formation and action selection and in diseases of the system. This work has elucidated the roles of these synapses in Parkinson's and Huntington's diseases, schizophrenia, autism, and drug addiction. His laboratory has developed optical, electrophysiological, and electrochemical methods to record neuronal activity, performing the first direct recordings of quantal neurotransmitter release (the fundamental unit of neurotransmission) from synapses and developing the first optical methods to observe neurotransmitter release and reuptake. It has also studied the life cycle of synaptic vesicles, cellular structures that package neurotransmitter release.

Evguenia Alexandrova is a postdoctoral associate working at the intersection of cancer and stem cell biology at Stony Brook University. She is also an aspiring writer, passionate about disseminating scientific knowledge to the general public.