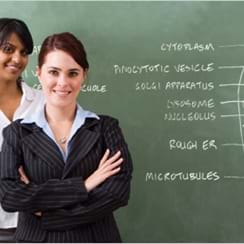 Next Generation Science and Engineering Standards

On September 21, 2011, Stephen Pruitt from Achieve, Inc, an independent, non-profit organization of government and corporate leaders dedicated to raising education standards, spoke at the Academy's Next Generation Science and Engineering Standards event, presented by the Science Education Initiative, the State University of New York, and New York University Steinhardt School of Education. The Next Gen Standards, as they are known, are an effort to update both what science is taught and how it is taught in the Nation's classrooms. The Standards aim to provide guidance to State and local education administrators on how to shape classroom environments in their region.

The Next Gen Standards are not part of the Common Core Standards, which are sponsored by the National Governors Association and which require student achievement to be measured by tested competence in a "core" of knowledge. By contrast, the Next Gen Standards are an update to the National Science Education Standards created by the National Research Council in 1996. These Standards provide guidance on scientific content and scientific processes to include in curricula, as well as interdisciplinary recommendations for subject matter to feature in the classroom. The updated Standards will also reflect changes in international standards. As one can imagine, since 1996 a tremendous amount of new scientific content has become available, an expanded understanding of how people learn has emerged, and an explosion of technology has occurred, all of which need to be incorporated into the 21st century science classroom.

To address new scientific content, the National Research Council convened a group of expert scientists to determine what concepts in science and engineering are critical for scientific literacy. In his talk, Pruitt described a process by which scientists argued for the inclusion of specific scientific topics and ideas. While the Council were not able to include everything, Pruitt emphasized that there was nothing stopping State or local educational administrators, or even individual teachers, from teaching their favorite topics in addition to the Council's recommendations. Once the Council drafted the framework, they distributed it widely to teachers and scientists who commented upon the draft. That feedback shaped the final version of the framework.

After the framework was complete, Achieve, Inc. began the process of shaping the Next Gen Standards, which will be organized by grade bands and which will try to develop a consistent story of science that builds student understanding in a developmentally appropriate way. One major change from previous versions is the way in which the scientific method is treated. Instead of outlining a single scientific method, the Next Gen Standards will breakdown the inquiry process into a series of skills essential for actually doing science.

The next steps in the process of developing the Standards include the completion and review of a draft of the Next Gen standards. Once the Standards are completed and revised, administrators and educators at the State and local levels will use them to craft their own standards, assessments, curricula, and professional development mechanisms. More information about the Standards can be found at www.nextgenscience.org.

Developing the Next Generation Science Standards

Stephen Pruitt was named Vice President for Content, Research, and Development for Achieve in November of 2010. He joined Achieve as the Director of Science in July of 2010. In addition to his new role, he will continue to lead the development of the Next Generation Science Standards. Pruitt began his career as a high school Chemistry teacher in Georgia, where he taught for 12 years. In addition, Pruitt served as President of the Council of State Science Supervisors and as a member of the writing team for the Science College Board's Standards for College Success. Most recently, he served on the National Academy of Science's "Committee on Conceptual Framework for New Science Education Standards," which is developing the framework for the Next Generation Science Education Standards. A native of Georgia, Pruitt earned a bachelor's degree in chemistry from North Georgia College and State University, a master's in science education from the University of West Georgia, and a PhD in chemistry education from Auburn University.