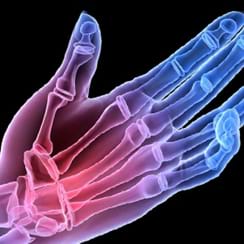 Novel Mechanisms in Resolution of Inflammation: Implications in Health and Disease

Uncontrolled, chronic inflammation is considered a major component of many common diseases, including asthma, atherosclerosis and peripheral vascular disease, Alzheimer's disease, and cancer. These are now understood to be "inflammatory diseases" in the sense that inflammation contributes to disease progression, tissue dysfunction, and ultimately organ failure, but it may not be the causative factor. Pro-inflammatory mediators and biochemical pathways have been widely studied, and recent research has elucidated mediators and biochemical pathways that contribute to the resolution of inflammation, providing new anti-inflammatory targets and drug development opportunities. At a January 25, 2011, symposium at the New York Academy of Sciences titled Novel Mechanisms in the Resolution of Inflammation: Implications in Health and Disease, researchers gathered to reviews recent discoveries in studies of the active resolution of inflammation. These studies have led to new approaches and to resolution pharmacology data for the treatment of inflammatory diseases, including promising first-in-human clinical trial results.

George Zavoico of MLV began the event with an overview of the topic. Ira Tabas from Columbia University then presented an update on mechanisms and consequences of defective inflammation resolution in atherosclerosis, discussing in detail how macrophages die in advanced lesions and the key role of defective efferocytosis, the process by which dead macrophages are normally cleared. He also discussed the devastating downstream effects of plaque necrosis. Charles N. Serhan from Harvard University and Brigham & Women's Hospital discussed novel mechanisms in the resolution of acute inflammation, giving a structural elucidation of specialized pro-resolving mediators (SPMs) and pro-resolving actins. In particular, he discussed the biosynthesis and functioning of three families of lipid-derived chemical mediators: resolvins, protectins, and maresins. From Queen Mary University of London, Mauro Perretti rounded out the first half of the program by discussing the role of other players in the "pro-resolving" phase of the acute inflammation process. Echoing Serhan's desire to harness endogenous resolution mechanisms to treat uncontrolled inflammation, Perretti presented his work on two pro-resolving mediators, Lipoxin A4 and Annexin A1, and their interactions with a specific receptor as they contribute to inflammation resolution.

Karsten Gronert of the University of California, Berkeley, then took the audience on a fascinating journey into eye biology and inflammation, as he discussed ways to stop the transition to chronic inflammation by preventing polymorphonuclear (PMN)-mediated tissue injury. Gronert presented recent findings from his group's investigation into an intrinsic lipid circuit in the cornea that helps resolve inflammation and promote ocular wound healing. Understanding this circuit could be crucial to preventing early-stage dysregulation of inflammatory processes from becoming inflammatory disease. Per Gjorstrup from Resolvyx Pharmaceuticals provided an industry perspective on taking synthetic analogues of resolvins from the bench to the clinic for use as a new therapeutic agent to treat dry eye. His presentation covered the efficacy of dose selection methods, murine models, and in vitro tests, as well as the preparation for a phase 2 clinical trial of the treatment. Edward Thorp of Columbia University then joined the speakers for a panel discussion.

This meeting is part of our Translational Medicine Initiative, sponsored by the Josiah Macy Jr. Foundation.

Grant Support
This activity is supported by an educational donation provided by Amgen.

Charles N. Serhan is the Simon Gelman Professor of Anaesthesia (Biochemistry and Molecular Pharmacology) at Harvard Medical School and Professor of Oral Medicine, Infection and Immunity at HSDM, Harvard University. Since 1995, he has been the Director of the Center for Experimental Therapeutics and Reperfusion Injury at Brigham and Women's Hospital in Boston. Serhan received his BS in biochemistry from Stony Brook University, New York, and went on to receive his doctorate in experimental pathology and medical sciences from New York University (NYU) School of Medicine. From 1981–1986, he was a visiting scientist at the Karolinska Institutet and post-doctoral fellow with Bengt Samuelsson. In 1996, he received an honorary degree from Harvard University.

Serhan was awarded an NIH MERIT Award (2000), the MacArthur Research Service Award in 2003, and the Outstanding Scientist Award in Inflammation Research at BioDefense, 2004. Serhan serves on several International Organizing Committees and has been a session chair and keynote lecturer at many meetings. He is a member of several societies and editorial boards, including the ASBMB, Inflammation (Associate Editor), American Society for Pharmacology and Experimental Therapeutics, AAI, ASIP and the Journal of Experimental Medicine (Editorial Board).

George B. Zavoico has over 6 years of experience as a life sciences analyst writing on publicly traded equities. He has most recently worked at Westport Capital Markets and Cantor Fitzgerald in their research departments and has received The Financial Times/Starmine Award two years in a row for being among the top-ranked earnings estimators in the biotechnology sector. His principal focus is on biotechnology, biopharmaceutical, specialty pharmaceutical, and molecular diagnostics companies engaged in discovering, developing, and marketing drugs and value-added diagnostics for the diagnosis and treatment of cancer and cardiovascular and inflammatory/immune diseases and disorders.

Prior to working as an analyst, Zavoico established his own consulting company serving the biotech and pharmaceutical industries by providing competitive intelligence and marketing research, due diligence services, and guidance in regulatory affairs. He also wrote extensively on healthcare and the biotech and pharmaceutical industries for periodicals targeting the general public and industry executives. Zavoico began his career as a Senior Research Scientist at Bristol-Myers Squibb Co., moving on to management positions at Alexion Pharmaceuticals, Inc. and T Cell Sciences, Inc. (now Celldex Therapeutics, Inc.). He has a BS in Biology from St. Lawrence University and PhD in Physiology from the University of Virginia.

Jennifer joined the Academy in 2009 as Director of Life Sciences and organizes 35 40 seminars each year. She is responsible for developing scientific content in coordination with the various life sciences Discussion Group steering committees, under the auspices of the Academy's Frontiers of Science program. She also generates alliances with outside organizations interested in the programmatic content.

Per Gjorstrup is currently Chief Medical Officer of Resolvyx Pharmaceuticals, which was founded based on the discovery of resolvins and protectins, and their potential as therapeutics for a wide range of diseases. Under Gjorstrup's leadership two drug candidates from the resolvin class of molecules have moved into clinical development, and one, for the treatment of dry eye, is ready to enter phase 3 clinical studies. Gjorstrup has an extensive background in translational and clinical drug development and has, in leading positions with AstraZeneca, Pharmacia, Biogen, and Micromet, been instrumental in bringing 6 first-in-class lead compounds from preclinical translational research into phase 2 clinical proof of concept studies and beyond. He received his MD and PhD degrees at University of Lund, in Lund, Sweden. He has published extensively on preclinical and clinical drug development and is the holder of several patents.

Born in Germany in 1965, Karsten Gronert received his BS in biology with a minor in chemistry in 1987. He earned his MS in biology in 1990 from the University of Texas at El Paso. Karsten obtained his PhD in cell physiology in 1995 from New Mexico State University and then moved to Boston for postdoctoral training in inflammation and molecular pharmacology at Harvard Medical School and Brigham and Women's Hospital. At Harvard Medical School he was promoted to instructor in 1999 and assistant professor in 2002. He moved to New York Medical College in 2003, and in 2005 was promoted to associate professor in pharmacology and ophthalmology. Karsten Gronert relocated his research program to the University of California, Berkeley and joined the faculty in the Vision Science Program in the fall of 2007. He was appointed as the Solon M. and Pearl A. Braff Chair in Clinical Optometric Science in January 2008. His National Eye Institute (NEI)-sponsored research program is focused on defining the role of lipid signals in inflammatory/immune responses of the eye and developing novel therapeutic approaches to limit the consequence and progression of ocular injury and diseases.

Mauro Perretti graduated in pharmaceutical chemistry (Faculty of Pharmacy) from the University of Florence, Italy, in 1985. After an important spell at the Sclavo Research Centre in Siena, he joined the William Harvey Research Institute in 1991. Here he started to investigate the pathophysiology of the process of neutrophil trafficking as well as its pharmacological exploitation: he began a fruitful line of research centered on annexin 1 (then called lipocortin) and its effects on cell migration in vivo. This work led the award of a Doctorate of Philosophy (Faculty of Science, University of London) in 1996. In 1997 he won a post-doctoral fellowship by the Arthritis Research Campaign UK, an award that was fundamental for his career. Senior Lecturer (1998–2000) at Bart's and the London Queen Mary School of Medicine and Dentistry, he was rapidly promoted to Reader and given a personal chair (2001), prelude to the Senior Fellowship by the Arthritis Research Campaign UK (2002–2007). He is currently a Professor of Immunopharmacology in the Center for Biochemical Pharmacology.

Ira Tabas received his medical degree and his doctorate in biochemistry from Washington University in St. Louis. Subsequently, he completed an internship and residency in internal medicine and a fellowship in endocrinology and metabolism at Columbia University Medical Center in New York City. During that period, Tabas also conducted a postdoctoral fellowship in the laboratory of Alan Tall in the Department of Medicine at Columbia University. He joined the Columbia faculty in 1985 and is currently the Richard J. Stock Professor and Vice-Chair of Research in the Department of Medicine and Professor of Pathology & Cell Biology (in Physiology and Cellular Biophysics).

Tabas's research focuses on the role of macrophages in atherosclerosis, with an emphasis on intracellular cholesterol metabolism in macrophages and the mechanisms and consequences of macrophage cell death in advanced atherosclerotic lesions. He has served on the editorial board of the Journal of Biological Chemistry, and he was Deputy Editor of the Journal of Clinical Investigation from 2002–2007. He has been elected to both the Society for Clinical Investigation and the Association of American Physicians.

Thorp's research focuses on the role of inflammation resolution during cardiovascular disease. He has published in Cell Metabolism and Circulation and regularly reviews articles for ATVB and the Journal of Immunology. Thorp's honors include receipt of the American Heart Association National Scientist Development Grant. He is currently an NIH Pathway to Independence Fellow.

This meeting is part of our Translational Medicine Initiative, sponsored by the Josiah Macy Jr. Foundation.

Grant Support
This activity is supported by an educational donation provided by Amgen.