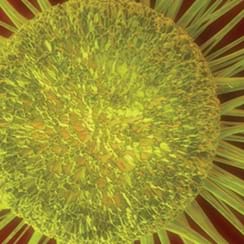 Out of Line: Cell Polarity in Cancer Progression, Invasion, and Metastasis

Many animal cells are asymmetrical. They have fronts and backs, centers and edges, or tops and bottoms, and they orient many of their structures according to this asymmetry. Cell polarity isn't just involved in normal biology. Indeed, a change in cell polarity is one of the hallmarks of carcinogenesis, and understanding—and stopping—that transition is now one of the hottest topics in cancer research.

At the June 29, 2009, meeting of the Academy's Cancer and Signaling Discussion Group, scientists explored the role of cell polarity in cancer biology. Senthil Muthuswamy explained that tumor formation is a two-step process, with distinct signals causing cells to proliferate and alter their polarity. Enrique Rodriguez-Boulan discussed how epithelial cells use separate mechanisms to sort apical and basolateral proteins. John Condeelis described how macrophages stimulate tumor cells to migrate out of breast tumors, recapitulating breast development, and Ian Macara addressed the role of the Par3 and aPKC genes in mammary stem cell fate.

Tanos B, Rodriguez-Boulan E. 2008. The epithelial polarity program: machineries involved and their hijacking by cancer. Oncogene 27: 6939-6957.

Senthil Muthuswamy received his PhD in biology from McMaster University, Hamilton, Canada and did his postdoctoral fellowship with Joan Brugge at Harvard Medical School. He is currently an associate professor at Cold Spring Harbor Laboratory, NY, and a Professor and Margaret Lau Chair in breast cancer research at Ontario Cancer Institute and University of Toronto, Canada. He has received several research awards: the V Foundation Scholar award, the Rita Allen Scholar award, and the Department of Defense Era of Hope Scholar Award.

Enrique Rodriguez-Boulan received his MD from the University of Buenos Aires. After three years training in Biophysics, he moved to New York University with an International Fogarty Award. At NYU, he trained as a cell biologist and, with his mentor from Argentina, Marcelino Cereijido, co-developed the main tissue culture model to study epithelial polarity, based on the kidney cell line MDCK. He is internationally known for his studies on mechanisms involved in the establishment and maintenance of epithelial polarity. His retinal research deals with the establishment of polarized structure and function in Retinal Pigment Epithelium (RPE) and with retinal diseases (e.g. Age Related Macular Degeneration) that are caused by disruption of RPE's support function for photoreceptors.

John Condeelis is the Judith and Burton P. Resnick Chair in Translational Research, professor and co-chairman of the Department of Anatomy and Structural Biology at the Albert Einstein College of Medicine (AECOM). He is the director of the Cancer Center program "Tumor microenvironment and Metastasis" and co-director, with Robert Singer, of the Gruss Lipper Biophotonics Center of AECOM, a center dedicated to the development and application of optical imaging technologies.

His training is in nuclear physics, optical physics, and cell biology. He worked for the U.S. Navy on particle accelerators and wave guides, and was a PhD student of Robert Allen, the developer of video microscope imaging, with whom he learned live cell microscopy and polarized optics. His current research interest is in tumor cell motility, chemotaxis and invasion during metastasis. He has pioneered the use of combined multiphoton imaging with expression analysis to derive gene expression signatures that define the pathways used by tumor cells in mammary tumors to move and invade blood vessels. He discovered the Invasion Signature of breast tumors. He has devised optical microscopes for uncaging, biosensor detection, and multiphoton imaging for these studies and has used novel caged-enzymes and biosensors to test, in vivo, the predictions of the invasion signature regarding the mechanisms of tumor cell chemotaxis to EGF.

He has authored more than 200 scientific papers on various aspects of cell and cancer biology, and optical imaging. He has held elected office in national societies including President of the New York Society of Experimental Microscopists, 2006–2009 Council of the American Society of Cell Biology, and 2006–2007 Centennial Program Committee of the American Association of Cancer Research.

Ian Macara is Harrison Distinguished Professor of Microbiology at the University of Virginia School of Medicine and director of the school's Advanced Microscopy Facility. He is highly regarded for his research in two distinct areas of cell biology: nuclear protein transport and cellular polarity. His research has important implications for understanding the molecular basis for human diseases, including cancer.