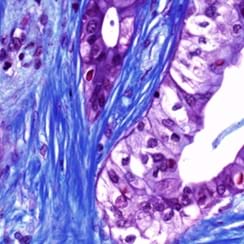 Pancreatic cancer is a leading cause of cancer death in the United States and is poised to become even more significant over the next two decades. This cancer usually goes undetected until it has reached an advanced stage, and patients face dismal prognoses due to the lack of effective therapies. However, recent years have seen the development of new molecular tools and animal models for investigating the mechanisms of pancreatic cancer initiation and development, which have led to new insights into potential therapeutic targets. This symposium, Pancreatic Cancer: Translation of New Ideas, presented on October 12, 2012, by the Cancer and Signaling Discussion Group at the New York Academy of Sciences, brought together scientists, translational researchers, and clinical investigators to explore multiple promising new approaches to treating this deadly disease.

Mission Partner support for the Frontiers of Science program provided by:

National Cancer Institute at the National Institutes of Health. Pancreatic Cancer. Information for both professionals and patients on the prevention, diagnosis, and treatment of pancreatic cancer, including clinical trial listings and recent news.

Hardacre JM. Is there a learning curve for pancreaticoduodenectomy after fellowship training? HPB Surg. 2010;2010:230287.

Kenneth P. Olive began his doctoral studies in 1998 with Tyler Jacks at the MIT Center for Cancer Research, investigating the neomorphic effects of mutant p53 in a mouse model of Li-Fraumeni Syndrome. While at MIT, he also helped develop a conditional mutant model of advanced lung adenocarcinoma. After graduating in 2005, Olive began a postdoctoral fellowship in the laboratory of David Tuveson at the University of Pennsylvania, later moving with the lab to the University of Cambridge. There he built a translational research facility for studying novel anticancer therapeutics in genetically engineered mouse models of pancreatic cancer. His studies into chemoresistance and the effects of Hh pathway inhibitors on drug delivery in pancreatic cancer were published in Science in 2009 and have led to multiple clinical trials to evaluate the approach in patients with metastatic pancreatic cancer. In 2010, Olive joined the faculty of the Columbia University Herbert Irving Comprehensive Cancer Center, where he has established a laboratory dedicated to translational science and experimental therapeutics in pancreatic ductal adenocarcinoma.

George Zavoico is managing director of research and a senior equity research analyst at MLV & Co., a boutique investment bank and institutional broker-dealer based in New York. He has over six years of experience as a life sciences analyst, writing on publicly traded equities. Prior to MLV, he was an equity analyst with Westport Capital Markets and Cantor Fitzgerald. Prior to working as an analyst, Zavoico established his own consulting company, serving the biotech and pharmaceutical industries by providing competitive intelligence and marketing research, due diligence services, and guidance in regulatory affairs. He also wrote extensively on healthcare and the biotech and pharmaceutical industries for periodicals targeting the general public and industry executives. Zavoico began his career as a senior research scientist at Bristol-Myers Squibb Co., moving on to management positions at Alexion Pharmaceuticals, Inc. and T Cell Sciences, Inc. (now Celldex Therapeutics, Inc.). He holds a PhD in Physiology from the University of Virginia and has held post-doctoral positions at the University of Connecticut Health Sciences Center, Brigham and Women's Hospital, and Harvard Medical School.

Jennifer Henry is the director of Life Sciences at the New York Academy of Sciences. Henry joined the Academy in 2009, before which she was a publishing manager in the Academic Journals division at Nature Publishing Group. She also has eight years of direct editorial experience as editor of Functional Plant Biology for CSIRO Publishing in Australia. She received her PhD in plant molecular biology from the University of Melbourne, specializing in the genetic engineering of transgenic crops. As director of Life Sciences, she is responsible for developing scientific symposia across a range of life sciences, including biochemical pharmacology, neuroscience, systems biology, genome integrity, infectious diseases and microbiology. She also generates alliances with organizations interested in developing programmatic content.

Dafna Bar-Sagi has been the senior vice president and vice dean for science and the chief scientific officer of NYU Langone Medical Center since the summer of 2011. She is also a professor of biochemistry. One of the country's leading cancer biologists, Bar-Sagi is widely known for elucidating cellular pathways involved in controlling cell growth. She has published more than 100 peer-reviewed research papers in leading journals on the molecular mechanisms underlying tumor development, devoting considerable research to RAS proteins, essential control elements of molecular machineries that drive the neoplastic process in many human cancers. Prior to joining the NYU Langone Medical Center in 2006 as chair of the Department of Biochemistry, Bar-Sagi headed the Department of Molecular Genetics and Microbiology at the State University of New York (SUNY) at Stony Brook. She earned her undergraduate and master's degrees from Bar-Ilan University, Israel, and her PhD from SUNY at Stony Brook. She has been a member of many scientific advisory boards including Starr Cancer Consortium, Pancreatic Cancer Action Network, and Abramson Family Cancer Research Institute and has served on the editorial boards of multiple journals including Cancer Cell, Oncogene, and Molecular and Cellular Biology.

Adrienne D. Cox is an associate professor of pharmacology and radiation oncology at the University of North Carolina at Chapel Hill. She was a National Merit Scholar at Pomona College, a founding student of the interdisciplinary Biomedical Sciences PhD program, and a National Science Foundation Fellow at Eastern Virginia Medical School. She completed her postdoctoral studies with Channing Der at what is now the Sanford-Burnham Institute. Cox has extensive experience in basic and translational studies of Ras family small GTPases. Since the earliest studies of the mechanisms of action of farnesyltransferase inhibitors, she has helped to elucidate the role and importance of posttranslational modifications such as isoprenoid lipids and phosphorylation to the membrane targeting events that drive Ras family signaling specificity, and emphasized the importance of isoform differences in promoting context-dependent oncogenesis. Her focus on molecular therapeutics of pancreatic cancer is driven by these findings. A member of the Lineberger Comprehensive Cancer Center, Cox is currently the chief of the Division of Cancer Research in the Department of Radiation Oncology.

Jeffrey M. Hardacre received his MD from Duke University School of Medicine, where he was a Howard Hughes Medical Student Research Training Fellow. He completed his surgical training at the Johns Hopkins Hospital. In 2004 he joined the Department of Surgery at University Hospitals Case Medical Center and Case Western Reserve University School of Medicine in Cleveland. Currently, he is an associate professor of surgery and the section head of pancreatic surgery at University Hospitals Seidman Cancer Center.

David Tuveson is professor and deputy director of the Cancer Center at Cold Spring Harbor Laboratory. Tuveson holds MD and PhD degrees from Johns Hopkins. Tuveson was a medical resident at Brigham and Women's Hospital and a medical oncology fellow at Dana-Farber/Partners Cancer Care. During his postdoctoral years, Tuveson co-developed KIT inhibitors for gastrointestinal stromal tumors with George Demetri. Simultaneously, he generated several widely-used mouse cancer models with Tyler Jacks. As an independent investigator, his lab generated the first mouse models of ductal pancreatic cancer at the University of Pennsylvania. Subsequently, Tuveson was recruited to the University of Cambridge to develop preclinical and clinical therapeutic strategies for pancreatic cancer. His lab identified a variety of parameters that limit therapeutic efficacy in pancreatic cancer, including poor drug delivery and survival factors in the microenvironment. These findings are currently undergoing clinical evaluation. Tuveson now directs the Cancer Therapeutics Initiative at Cold Spring Harbor Laboratory and serves as director of research for the Lustgarten Foundation. He continues to practice medical oncology with an adjunct appointment at Memorial Sloan-Kettering Cancer Center. His awards include the Rita Allen Scholarship.

Mission Partner support for the Frontiers of Science program provided by: