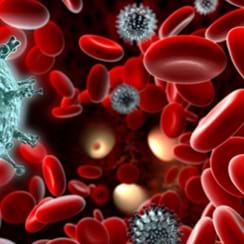 Pathogens in the Blood Supply

According to the American Blood Center, approximately 14 million units of blood are transfused in the United States every year. Current screening protocols routinely test for several pathogens, including the Hepatitis B virus, Hepatitis C virus, Human Immunodeficiency Viruses types 1 and 2, Human T-Lymphotropic virus types 1 and 2, and syphilis. Recent headlines indicate that the blood supply may contain other organisms, such as Xenotropic Murine Leukemia Virus-Related Virus (XMRV), that are not currently being identified in these routine screens. At the Pathogens in the Blood Supply symposium held at the New York Academy of Sciences on March 29, 2011, experts from a range of backgrounds came together to discuss the current problems, reveal recent advances in the testing and screening of the blood supply, and explore future directions for the improvement of screening protocols.

After an excellent overview of the rationale for the symposium from Lorrence H. Green from Westbury Diagnostics, the first two speakers outlined the current state of blood banking. Gail Moskowitz, a healthcare consultant, discussed transfusion-transmitted pathogens and strategies currently employed to limit their transmission. She then presented recent examples illustrating the importance of the different strategies. Susan L. Stramer, executive scientific officer at the American Red Cross then provided an extremely comprehensive explanation of the infectious diseases that are relevant to transfusion safety. She covered pathogens that have historically been the focus of blood safety (HIV, Hep C virus, and Hep B virus), and then moved on to pathogens screened for more recently, such as West Nile Virus RNA and Trypanosoma cruzi. Future screens may target Babesia (a blood parasite), Dengue viruses, and the vCJD (Creutzfeltdt–Jakob disease) prion.

W. Ian Lipkin, John Snow Professor and director of the Center for Infection and Immunity at Columbia University's Mailman School of Public Health then reviewed recent advances in nucleic acid diagnostic methods for the diagnosis of infectious diseases. He discussed mechanisms of microbial pathogenesis, routes to proving causation, and a staged strategy for microbe discovery and surveillance. In his evaluation of the strengths and limitations of various analytical platforms, he provided examples that illustrate how each platform can be used to investigate clinical problems. His talk was followed by a presentation from Judy A. Mikovits, the research director of the Whittemore Peterson Institute for Neuro-Immune Disease. She discussed strategies for detecting XMRV in blood as well as recent progress in the development of tests to detect and characterize XMRV variants.

Joining the symposium from the New York Blood Center, Debra Kessler, director of Special Donor and Community Health Services, then took the stage to ask the audience what is next for blood pathogen screening. In her examination of emerging challenges to a safe blood supply, she reviewed testing technologies, including nucleic acid testing for common viruses, which have drastically reduced the risk of transfusion transmission. However, she reported that emerging infections, particularly those transmitted via insects, are increasing in the population, and testing for these infectious agents (including those that cause Dengue fever and babesiosis) is currently not available. She explained several existing approaches for protecting the blood supply from emerging threats. Among others, she considered the creation of pathogen-specific tests and the method of pathogen inactivation. Kessler concluded with her thoughts on "whether we should test everyone for everything."

To conclude the symposium, Sanjai Kumar, a head researcher in the FDA's Division of Emerging and Transfusion transmitted Diseases, continued the examination of the future of defending the blood supply against emerging pathogens. He reported that there are no FDA-approved laboratory tests for many emerging and potentially important pathogens, even for pathogens that are either currently endemic in the U.S., have caused recent outbreaks in the U.S., or are epidemic in other parts of the world. These undetected infectious agents present a serious risk to donors and pose a potential threat to the continued safety and availability of the U.S. blood supply. He addressed threats to the blood supply from a number of infectious agents not yet interdicted by either donor testing or by questionnaires, and he described some of the ongoing efforts in this regard at the FDA's Center for Biologics Evaluation & Research (CBER).

This event was funded in part by the Life Technologies™ Foundation.

•  Science has fully retracted the report "Detection of an infectious retrovirus, XMRV, in blood cells of patients with chronic fatigue syndrome." Alberts B. Retraction. Science. 2011.

Debra Kessler is a former psychiatric nurse with a Masters Degree in Health Care Administration. She began work at the New York Blood Center in 1987 and is now the Director of Special Donor and Community Health Services. She is responsible for donor notification and counseling regarding infectious disease testing, and she advises hospital transfusion services about transfusion transmission of infectious diseases. Among other American Association of Blood Banks committees she serves on the Transfusion Transmitted Diseases Committee. She has also been the Principle Investigator at NY Blood Center for many studies, been an author on a number of publications and made numerous professional presentations.

Sanjai Kumar is Chief, Laboratory of Emerging Pathogens, Division of Emerging and Transfusion transmitted Diseases, Center for Biologics Evaluation and Research at the FDA. His expertise includes diagnostics, and molecular immunology and pathogenesis of malaria and babesiosis, and blood safety from infectious agents. Kumar joined the FDA in 2002 as a Senior Investigator to initiate a research/regulatory program on malaria diagnostics, immunology and pathogenesis. His prior experiences included ten years at National Institute of Allergy and Infectious Diseases, five years as Senior Scientist at the US Navy Malaria Program and eight years as Adjunct Faculty, Johns Hopkins University Bloomberg School of Public Health. Kumar serves on several international advisory and grant panels including the World Health Organization and National Institutes of Health. Since 2003, Kumar has served as Associate Editor of Infection and Immunity.

W. Ian Lipkin, MD, is internationally recognized as an authority on the use of molecular methods for pathogen discovery. Lipkin has over 30 years of experience in diagnostics, microbial discovery, and outbreak response; has mentored and trained more than 30 students and post-doctoral fellows; and leads a team of over 65 investigators, post-doctoral fellows, and research and support staff at MSPH. In the 1980s, Lipkin identified AIDS-associated immunological abnormalities and inflammatory neuropathy, which he showed could be treated with plasmapheresis, and demonstrated that early life exposure to viral infections affects neurotransmitter function. He was the first to use purely molecular methods to identify infectious agents, implicated West Nile virus as the cause of the encephalitis epidemic in New York in 1999, assisted the WHO and the Peoples Republic of China during the 2003 SARS outbreak, developed MassTag PCR and Greenechip technology and pioneered the use of high-throughput sequencing in pathogen discovery. He and his team have discovered or characterized more than 400 infectious agents including Borna disease virus, West Nile virus, LuJo virus, human rhinovrirus C, piscine reovirus and canine hepacivirus. Lipkin has been featured by The New York Times, The Los Angeles Times, Discover Magazine, Nature Medicine, the History Channel, National Geographic, National Public Radio, and Wired.

Judy Mikovits spent more than 20 years at the National Cancer Institute in Frederick, MD, during which time she received her PhD in Biochemistry and Molecular Biology, investigating mechanisms by which retroviruses dysregulate the delicate balance of cytokines in the immune response. Formally trained as a cell biologist, molecular biologist and virologist, Mikovits's research has since focused on translational research in government, biotechnology, and academic settings. Mikovits joined Whittemore Peterson Institute for Neuro-Immune Disease (WPI) in November of 2006 as the WPI's first Research Director, charged with establishing a translational research program aimed at identifying biomarkers and underlying causes of debilitating neuro-immune diseases. Mikovits has co-authored more than 40 peer-reviewed publications.

Gail Moskowitz specializes in Pathology and the medical leadership of blood and cord blood banks. She provides healthcare consultant services in the fields of blood banking, cellular therapeutics, laboratory medicine, pharmaceutical, medical-legal and regulatory affairs, and medical informatics. Moskowitz is Board Certified and holds academic appointments as a lecturer in Pathology at Harvard Medical School and as an assistant clinical professor of Pathology at the Mount Sinai School of Medicine. Moskowitz has held several posts directing blood banks throughout New York and also served as Chairman of Pathology and Laboratory Medicine at St. Vincent's Midtown Hospital in New York. More recently, she has served as the Medical Director of cord blood banks, both private and public. Moskowitz graduated from the Massachusetts Institute of Technology, where she was elected to Phi Beta Kappa, and the Mount Sinai School of Medicine. Moskowitz was a resident and chief resident in Anatomic and Clinical Pathology and the Morten Grove–Rasmussen Fellow in Immunohematology, all at the Massachusetts General Hospital. She is active in the American Association of Blood Banks and serves on the AABB's Cellular Therapies-Standards Program Unit and on the Board of Directors and on the Scientific and Medical Advisory Panel of the Parent's Guide to Cord Blood Foundation.

Susan Stramer received her BS and MS degrees in Biology and Chemistry from Northern Illinois University where her research interest was water microbiology. She received her PhD from the University of Wisconsin–Madison in Bacteriology with a minor in Toxicology in 1984. Her research focused on poliovirus survival in water and wastewater as a model system for water-borne enteric viruses. She then spent four years as a postdoctoral fellow at the U.S. Centers for Disease Control and Prevention (CDC). Following that, she was employed at Abbott Laboratories in their Diagnostic Division for nine years working in the areas of product development, R&D, and scientific affairs in support of hepatitis and retroviral assays. During her time at Abbott, she managed manufacturing, support and product development for most of the blood donor screening assays. In 1995, she joined the American Red Cross as Laboratory Director for the National Confirmatory Testing Laboratory. She now serves as the Executive Scientific Officer at the Scientific Support Office within Biomedical Services' Medical Office where she provides scientific leadership in the area of infectious diseases for the National Testing Laboratories and blood collection regions of the Red Cross. Stramer has published more than 100 papers and has been a representative on numerous committees of the AABB and the International Society of Blood Transfusion, including serving on the AABB Board of Directors for the Mid-Atlantic district (2004–2008), as Secretary Treasurer (2009–2010) and now as the Vice President.