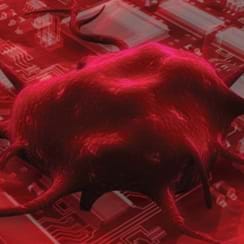 At the June 2, 2009, meeting of the Systems Biology Discussion Group, four prominent biologists showed how the systems approach can be used to study cancer. As their results showed, the strategy can reveal both interesting biology and promising new therapeutic targets for one of the world's deadliest diseases.

Andrea Califano is a professor of biomedical informatics at Columbia University, director of the Columbia Initiative in Systems Biology, director of the Center for the Multiscale Analysis of Genetic Networks, and associate director for bioinformatics at the Irving Cancer Research Center. Califano's interests are broadly defined within the field of Systems Biology, with specific application to human malignancies.

Califano's doctoral thesis in physics, at the University of Florence, was on the behavior of high-dimensional dynamical systems. From 1986 to 1990, as a research staff member in the Exploratory Computer Vision Group at the IBM TJ Watson Research Center he worked on several algorithms for machine learning, more specifically for the interpretation of two- and three-dimensional visual scenes. In 1990 Califano started his activities in computational biology and, in 1997, became the program director of the IBM Computational Biology Center, a worldwide organization active in several research areas related to bioinformatics, chemoinformatics, complex biological system modeling/simulation, microarray analysis, protein structure prediction, and molecular-dynamics. In 2000 he co-founded First Genetic Trust, Inc. to actively pursue translational genomics research and infrastructure related activities in the context of large-scale patient studies with a genetic components. He joined Columbia University in 2003.

Arnold J. Levine, professor in the Simons Center for Systems Biology, School of Natural Sciences, Institute for Advanced Study, is a leading authority on the molecular basis of cancer and co-discover of the p53 tumor suppressor protein, one of the body's most important defenses against many forms of cancer. Levine received a PhD from the University of Pennsylvania in 1966. After postdoctoral work at the California Institute of Technology, he joined Princeton in 1968 as an assistant professor, becoming a professor of biochemistry in 1976. In 1979, Levine moved to the SUNY Stony Brook School of Medicine to chair the Department of Microbiology. He returned to Princeton in 1984. Between 1984 and 1996, he presided over a major expansion of Princeton's life sciences programs as chairman of the Department of Molecular Biology. Levine was president of the Rockefeller University, from 1998 to 2002.

Levine helped shape U.S. science priorities as chairman of an influential 1996 review panel on federal AIDS research funding. He also chaired the National Cancer Advisory Board, which advises the National Academy of Sciences and its Institute of Medicine on cancer policy. Levine was elected to the National Academy of Sciences in 1991 and to its Institute of Medicine in 1995. In April 2001, Levine received the first Albany Medical Center Prize in Medicine and Biomedical Research, the largest annual prize in science or medicine offered in the United States. The prize honors a physician or scientist whose work has led to significant advances in health care and scientific research.

Galit Lahav received her PhD in 2001 from the Department of Biology in the Technion, Israel Institute of Technology. Between the years 2001–2003, she completed her postdoctoral fellowship at the Weizmann Institute of Science in Israel. She carried out single-cell studies on the dynamics of proteins in living human cells, and used quantitative and computational techniques to model cellular responses. She then spent a year at Harvard's Bauer Center for Genomics Research, and in the fall of 2004, was appointed as an assistant professor in the Department of Systems Biology at Harvard Medical School. Lahav's discoveries emphasize the importance of developing new technologies to allow quantitative single-cell studies of protein and network behavior. Her lab combines experimental and theoretical approaches to study the dynamics of signaling networks and cellular decision-making in individual human cells.

Chris Sander is a theoretical physicist turned cancer researcher. He heads a research program in computational and systems biology in a department of computational biology founded by him in 2002 at Memorial Sloan Kettering Cancer Center. His research focuses on systems biology of cancer cells, cancer genomics, pathway information systems, and genetic variation.