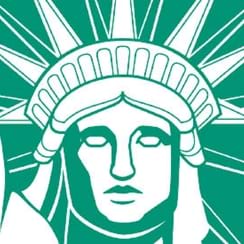 Perspectives in STEM: An Evening with Laurie Leshin

On January 28, 2014, New York Women in STEM (NYWiSTEM) hosted An Evening with Dr. Laurie Leshin, the first event in its Perspectives in STEM series, in partnership with the Academy's Science Alliance. Laurie Leshin, Dean of the School of Science at Rensselaer Polytechnic Institute (RPI) and president-elect of Worcester Polytechnic Institute (WPI), spoke about her passion for scientific discovery and the experiences that have shaped her career. She highlighted the importance of asking inspiring questions as a means to drive innovation and the need to engage intellects from all backgrounds to seek answers and solutions. She also offered advice for young scientists and provided her perspective on the future of science, technology, engineering, and math (STEM) education.

Leshin's career spans work as an academic leader, a NASA executive, and a geochemist. She began the evening by recounting her career path. Her journey into space science began at age 19, when a female professor encouraged her to apply for an internship at NASA during a period Leshin described as the heyday of the shuttle exploration program. Leshin credits the internship as the catalyst that ignited her interest in space exploration research and she went on to earn a doctorate in geochemistry at the California Institute of Technology. Her dissertation focused on meteorites from Mars, and she spent many hours in a "tiny room under the stairs" heating meteorites and then extracting and analyzing the water inside.

In 1996, while Leshin was a postdoctoral associate at the University of California, Los Angeles, news broke that a team of scientists had found evidence of fossilized bacteria in a Mars meteorite. Suddenly, her field transformed from a research area of interest to a small group of scientists to headline news around the world. Leshin noted that this publicity—which stirred the imagination of millions with work from a lab—inspired her to take leadership positions focused on raising public awareness about scientific discoveries. Leshin's work outside research included leading the launch of the School of Earth and Space Exploration at Arizona State University, while pursuing an academic career track and establishing her own lab.

A turning point in her career came in 2004, when President George W. Bush gave an address at NASA about his vision for a new age of space exploration. This vision included plans to retire the space shuttle and aspire beyond low earth orbit missions, and he announced the creation of a committee tasked with outlining how to implement these goals. Leshin's enthusiasm for Mars exploration and fresh perspective as a scientist who is too young to remember the Apollo missions earned her a spot on the nine-member commission, alongside astrophysicist Neil deGrasse Tyson and former Secretary of the Air Force Pete Aldridge. She recalled that she was impressed by the other members of the committee, who had varied expertise in private and public sectors, nonprofits, and academia. Their mentorship encouraged her to broaden her experience, and she moved out of academia to become the director of sciences and exploration at NASA's Goddard Center.

Leshin stayed at NASA for six years and held three executive positions, overseeing the mission to service the Hubble telescope in 2009 among other projects. But despite enjoying her work and learning about the impact of research on policy decisions, she missed interacting with students and faculty at academic institutions, which she views as "the gasoline in the engine of innovation and prosperity for our country." In order to apply her new leadership skills in an academic setting, Leshin took a position as Dean of the School of Science at RPI, where she has facilitated interdisciplinary collaboration among students and faculty. In her next role as the first female president of WPI, she hopes to continue to support STEM professionals through the school's distinctive project-based curriculum, which sends teams to work on interdisciplinary community projects around the world. Leshin noted that she is excited by this model because it aims to realize the "potential of STEM fields to do good in the world."

Leshin's advice for career development is to be passionate about your work. "Lead from wherever you are," she said, adding that it is possible to find leadership roles and mentor others from any position. She advised participants to be open to opportunities—"Many of [my opportunities] have happened because I answered the phone"—and to build an understanding of which ones to pursue. Listening, especially as a leader, is essential to earn the goodwill and cooperation of others. "Skate to where the puck is going," she recommended, using an hockey analogy and quote made famous by Wayne Gretzky's father to underline the value of preparing for the future in a changing world. Those engaged in public policy and academia must also be able to place their work in context and explain its implications. Play to your strengths rather than correcting your weaknesses, she advised. And finally, "break all the rules, but stay on the team," she said, quoting a sentiment written to memorialize Sally Ride, the first American woman in space.

In keeping with her advice to look forward, Leshin also imparted her thoughts on the future of STEM education in the U.S. There is a trend toward applied research—focused on global challenges such as environmental sustainability and cybersecurity—that will require interdisciplinary collaboration. Scientists must keep up with progress in their field, a skill she called "uptooling." Leshin thinks that there will continue to be a shift toward data-driven science, which is changing the way research questions are generated and science is conducted. She noted that research ethics (data transparency and accountability) will remain an important issue in science. Funding sources will diversify and projects will rely more on the private sector and philanthropic organizations as government funding declines. Scientists will need to balance a tradeoff between the benefits of citizen science, which involves the general public in scientific endeavors, and the need to defend the value of specialized training and expertise in the eyes of the public. She predicted that future STEM education will incorporate new learning methods, such as gamification and e-learning, as well as personalized learning based on a better understanding of how individuals learn.

Leshin concluded by giving the audience an insight into the latest results from the Mars Curiosity rover. She became involved in this project at NASA before stepping into administrative roles, and the launch of the rover in 2012 afforded her an opportunity to get involved in research again. The goal of the mission is to look for habitable environments on Mars. The rover has a laser for examining rocks, a robotic arm for taking samples of soil and rock, and a mobile geology lab for testing the samples. 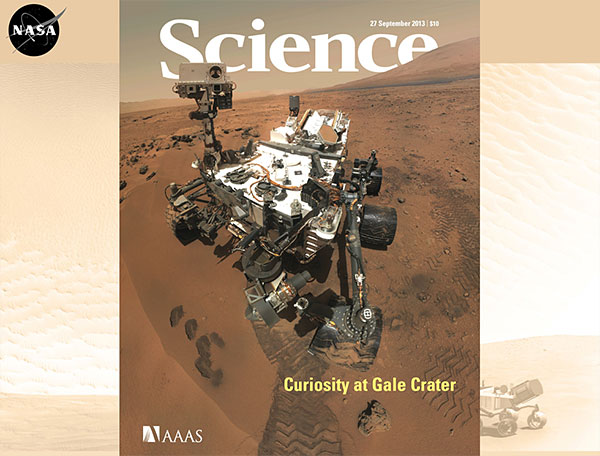 The Mars Curiosity rover is exploring the surface of Mars, searching for signs of life. Leshin is part of the NASA team working on the rover. (Image courtesy of Laurie Leshin)

Curiosity has been exploring the surface of Mars, taking photographs, and processing samples since it landed on August 5, 2012. The landing spot was chosen based on its proximity to a large crater that is believed to have once contained liquid water, making it a good candidate to contain remnants of ancient life. Leshin outlined the rover's findings thus far: rounded pebbles similar to those found in steams on Earth, shaped by flowing water; a high content of water trapped in surface soil, as well as the building blocks of life (elements such as carbon and nitrogen); and evidence of a habitable ancient lake on the floor of the crater. She pointed out that these results confirm for the first time that there was once a habitable environment on Mars, approximately 3.5 billion years ago, complete with a neutral pH, standing water, the elements required for life, and energy sources. Leshin emphasized that these findings do not yet provide concrete evidence for life on Mars. Indeed, signs of life are difficult to find because the planet's atmosphere is not conducive to preserving organic matter, but the rover will continue its search.

One Woman's Walk of Discovery on Earth & Mars

Laurie Leshin is Dean of the School of Science at Rensselaer Polytechnic Institute (RPI) and president-elect of Worcester Polytechnic Institute (WPI). Before joining RPI, she held several senior executive roles, including as deputy head of the Future Human Spaceflight Program at NASA Headquarters and deputy director for science and technology at NASA's Goddard Space Flight Center. Before joining NASA, Leshin was a chaired professor of geological sciences and director of the Center for Meteorite Studies at Arizona State University. Leshin received her PhD in geochemistry from California Institute of Technology. Her scientific expertise is in cosmochemistry and planetary science. Leshin is a member of the science team for the Mars Curiosity rover mission, currently roaming the surface of Mars. Leshin served on President George W. Bush's Commission on Implementation of United States Space Exploration Policy, a nine-member commission charged with advising the president on the execution of his Vision for Space Exploration. She received the NASA Distinguished Public Service Medal in 2004 and the Outstanding Leadership Medal in 2011. President Obama recently appointed Leshin to the Advisory Board of the Smithsonian National Air and Space Museum. The International Astronomical Union recognized her contributions to planetary science with the naming of asteroid 4922 Leshin.

Andrea Egizi is completing a PhD in ecology and evolution at Rutgers University. Her work examines the ecological and microevolutionary processes underlying the establishment and spread of invasive species, using a cold-adapted mosquito with recently established populations in warmer climates as a model. She is also interested in improving science literacy and fostering enthusiasm for scientific discovery among a broader audience.